Yesterday my wonderful wife and I attended our annual neighborhood picnic/gathering. As always, we had a marvelous time. Our neighbors are polite and friendly.

After that I attended the last “First Saturday” car show for 2019 sponsored by our local Corvette club. As always, I had a great time. The people at the show were polite and friendly.

Even though the two events were only about two miles apart, though, they might as well have been two million miles apart in terms of the attitudes towards what is happening in our country today. I remain convinced that the US is headed towards dissolution. I also don’t think that will be a bad thing although I seriously doubt I will live to see it.

I reject most policy tenets of both major parties in the US. I also reject the notion that I have to pick one. I cannot and will not vote for a candidate with whom I disagree on 75% of policy even if I disagree with the other candidate on 80% of policy. The “lesser” of two evils is still evil. I think the policy platforms of both parties are rife with inconsistencies.

Let’s do more math, but more fun this time…

The probability that at some time in the next 2-3 years I buy a car manufactured by a defunct American car company is probably 75%. The probability that car is a Studebaker Gran Turismo Hawk is also about 75%. That means, overall, a 3-in-16 chance (about 19%) exists that I will buy something other than a GT Hawk. Here are two possibilities: 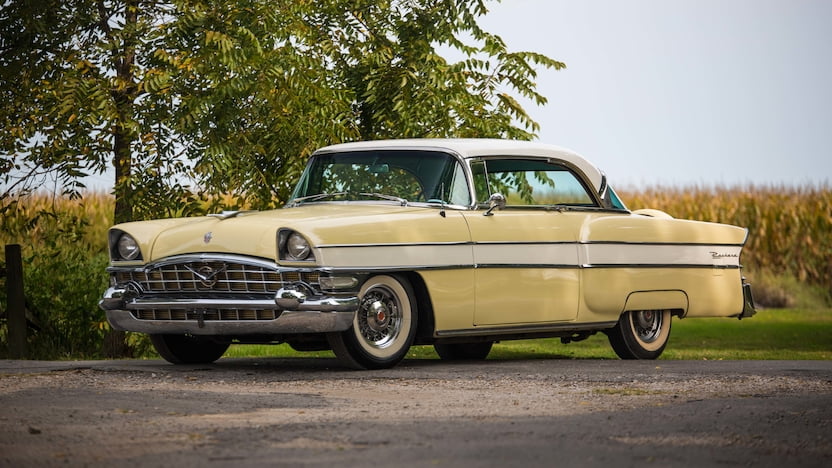 I have shown photos of these cars before. I have also declared my extreme affinity for the 1956 Packard Caribbean Convertible. However, unlike my Ultimate Garage 2.0, barring some unforeseen monetary windfall a Caribbean is out of my price range. When I began publishing Ultimate Garage 2.0 in late May Hagerty gave an average value to a ’56 Caribbean Convertible of $67,000. I’m not going to spend even a third of that amount on my homage to a defunct American car company.

1956 was, of course, the last year for “real” Packards that were not badge-engineered Studebakers. That year also saw Packard adopt a “modern” 12-volt electrical system with a negative ground. Packard 400 production for 1956 (Model 5687) was 3,224 cars; production of Executive hardtop coupes was just 1,031 vehicles.

On classiccars.com one ’56 400 is listed with an asking price of $14,980. 56packardman has written that price is too steep for that particular car. On Hemmings one Executive is shown with a list price of $18,900.

Anyway, as I have written many times before a line from the movie Diner seems appropriate, “If you don’t have dreams you have nightmares.” I have nightmares, anyway, so I might as well try to have some nice dreams, too.