Of course, 1946 was the first full calendar year after the end of World War II. It was also 75 years ago for those of you who are mathematically challenged.

On January 10, 1946, the scientists of Project Diana bounced radar signals off the Moon. The exact distance between the Earth and the Moon was measured and, in essence, the project marked the beginning of the Space Age.

“It is my duty however, for I am sure you would wish me to state the facts as I see them to you, to place before you certain facts about the present position in Europe.

From Stettin in the Baltic to Trieste in the Adriatic, an iron curtain has descended across the Continent. Behind that line lie all the capitals of the ancient states of Central and Eastern Europe. Warsaw, Berlin, Prague, Vienna, Budapest, Belgrade, Bucharest and Sofia, all these famous cities and the populations around them lie in what I must call the Soviet sphere, and all are subject in one form or another, not only to Soviet influence but to a very high and, in many cases, increasing measure of control from Moscow.”

While US auto production actually resumed in calendar year 1945 after the end of the war, only about 83,000 cars were built. While the auto industry struggled with labor unrest and supply shortages, automobile production soared in 1946 as a population that had suffered for more than 15 years with an economic depression and world war was eager to buy any new car it could. I have been unable to find figures for calendar year 1946 production, but for the 1946 model year, production reached about 2.25 million units. That figure was still well below the 1941 number of about 3.7 million cars, however, perhaps testimony to the effects of the labor and supply difficulties.

General Motors, in particular, was hit hard by a strike that lasted 113 days from November, 1945 to March, 1946. The strike helped Ford lead in model year production at approximately 468,000 cars. Chevrolet built 398,000, but Plymouth and Dodge were third and fourth, respectively.

Ford’s most popular 1946 car was the Super DeLuxe Tudor sedan. I hope this picture (from Classic.com) is one of those: 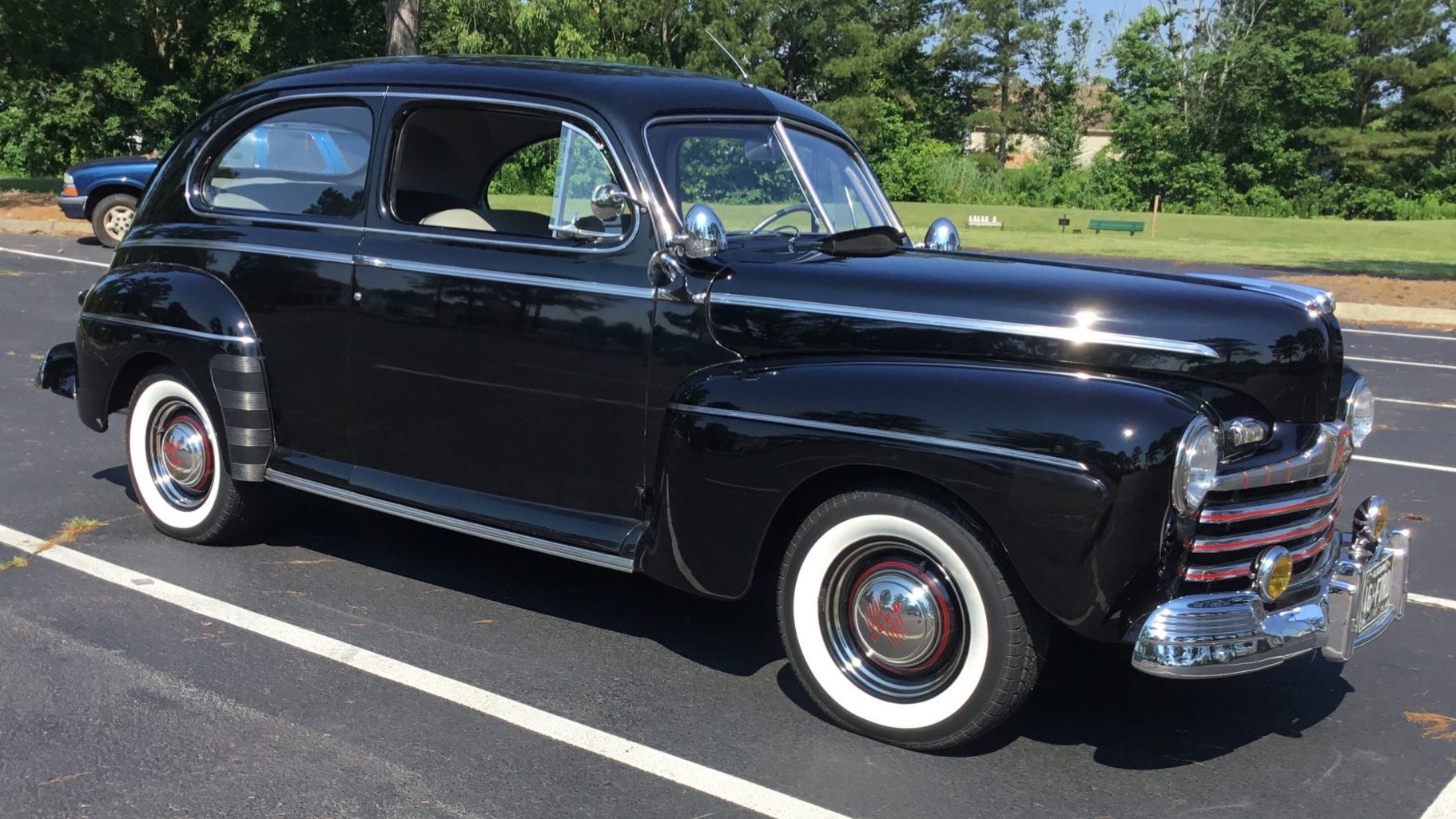 Yes, a “Tudor” sedan. While today we classify almost all four-door cars as sedans and almost all two-door cars as coupes, I think the original definition of those terms had to do with total interior space and not with the number of doors.

Of course, 1946 model year cars looked like prewar cars. Studebaker introduced an all-new car in late spring 1946, and new company Kaiser-Fraser began production about the same time, but these were, technically, 1947 model year cars. Is this a 1942 Chevrolet or a 1946? (Picture from Pinterest…) 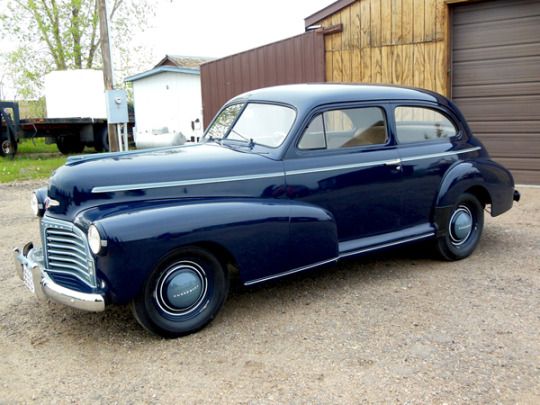 Of course, this post could not capture the entirety of world and automobile events for 1946. I encourage you to do some research on your own.

On this day 75 years ago my parents married. They were living in a “Displaced Persons” camp in Austria. In other words, they were refugees.

People in this country, especially younger people, have no frame of reference with which to understand what happened during World War II. As a result, they lack a genuine perspective on events. I am trying to be polite writing about this. What I really feel about the cluelessness of most people is extremely impolite.

Today is Yom HaShoah or Holocaust Memorial Day. I have a strong connection to the Holocaust. My father watched his family murdered by troops (you don’t want to know how he survived). My mother and her parents escaped from their little Polish village just days before the burned it to the ground. (Of course, there’s the sad tale of my uncle who survived a concentration camp only to be murdered when two pieces of sh*t robbed his grocery store, but that’s another story for another day.)

The Holocaust DID happen and, sadly, it could happen again. The recent spate of attacks on Asian-Americans is a disgusting manifestation of the large swath of ignorance that cuts through American society. What no one reports, however, is despite the fact that Jews comprise just two percent of the US population, they have been the victim of more than half of the hate crimes in this country every year for at least the last five years.

It has been said by people like Mark Twain that Jews are the victim of their own success. How is it, exactly, that so many Jews who came to the US in the late 19th and early 20th centuries were so successful, given they suffered enormous discrimination, did not speak English upon arrival and there were no government programs to help them? Well, I have my own theory, but I do not want to incite a flame war. Suffice to say no one should ever become successful by doing nothing except playing the victim.

On this day in 1945 Soviet troops entered and “liberated” the Auschwitz concentration camp, where over one million people were murdered by the including almost a million Jews. Since 2006, this date has been observed as Holocaust Remembrance Day.

Don’t think it can happen again? In the United States, a 2018 survey showed that 66% of millennials could not identify Auschwitz. A 2017 European poll revealed that about a third of the 7,000 European respondents across seven countries knew “just a little or nothing at all” about the Holocaust.

More disturbingly, shirts with “Camp Auschwitz” or “6MWE,” as in 6 Million Wasn’t Enough, have been seen with increasing frequency in gatherings of right-wing extremists in the US. Of course, the American Left is increasingly hostile to Israel and much of that hostility has to stem from anti-Semitism.

Why the animus towards Jews? Maybe it’s as Mark Twain wrote in the 19th century:

“I am persuaded that in Russia, Austria, and Germany nine-tenths of the hostility to the Jew comes from the average Christian’s inability to compete successfully with the average Jew in business…In Berlin, a few years ago, I read a speech which frankly urged the expulsion of the Jews from Germany; and the agitator’s reason was as frank as his proposition.

It was this: that eighty-five per cent of the successful lawyers of Berlin were Jews, and that about the same percentage of the great and lucrative businesses of all sorts in Germany were in the hands of the Jewish race! Isn’t it an amazing confession? It was but another way of saying that in a population of 48,000,000, of whom only 500,000 were registered as Jews, eight-five per cent. of the brains and honesty of the whole was lodged in the Jews.”

I have written these figures before and I don’t know if they are still exactly accurate, but they are close enough for this purpose. Jews comprise only two-tenths of one percent of the world’s population, but have been awarded:

25% of the Fields Medals in Mathematics, which is the ultimate honor in that discipline

Obviously, no other group remotely approaches that level of achievement, per capita or otherwise. I am not going to offer reasons or an explanation because such an endeavor is not really relevant. The facts are what they are.

The death of Kobe Bryant in a helicopter crash yesterday is sad and shocking. That is true for me even though I am not an NBA fan and have not been one since the early 1980s.

The harsh, but very profound lesson is to Carpe Diem, Seize The Day! Do not put off doing something until later because none of us is guaranteed later. Look for that better job, move to that better place. Do not let others without legitimate authority over your life tell you what to do and how to live.

From the untimely death of a famous athlete to the attempted extermination of an entire people…today is International Holocaust Remembrance Day because on this day in 1945 the Soviet Army reached the Auschwitz concentration camp. This day has been observed throughout the world since 2005.

About 1.1 million people died in Auschwitz, of whom about 80% were Jews. The number of Jews who died in Auschwitz is equal to the current population of the city of Indianapolis, the 17th largest city in the US.

This day is not really a day about words, and I should probably be more discreet in that members of my family were among those who died in the Holocaust, but I cannot resist because of my intense contempt and hatred for Holocaust deniers and anti-Semites. To the people in those groups, including those serving in Congress, Zolst Leegen En Drerd! One more thing:

I was going to try to segue to something lighter, but not today.

In 1937 the German government gave its highest honor for foreigners to Benito Mussolini. Who received the “award” in 1938? !!

This CNBC article is about how the mayor of Dearborn, Michigan tried to censor an article about and that the attempt to censor has received some national attention. Bill McGraw, former editor of the Dearborn Historian, wrote Ford “was also a man who mass produced hate.” The Dearborn mayor ordered all the copies of the Autumn 2018 issue, Volume 55, No. 3 confiscated and, days later, fired McGraw.

published a “newspaper” called the Dearborn Independent that seemingly wrote about nothing except blaming all of the world’s problems on “the international Jewish conspiracy.” The “newspaper” claimed that Queen Isabella of Spain (sponsor of Christopher Columbus and his voyages to America) had been a “Jewish front for the discovery of America,” that Jewish bankers were responsible for the assassination of Abraham Lincoln, and that Jews were responsible for the popularization of “Negro Jazz,” which the paper called “moron music.”

was a despicable, miserable excuse for a human being. People who blindly worship him or quote him as some kind of oracle are almost certainly ignorant or hateful or both. Luzzim Brenna Vee Da Keen!

It’s difficult to calm down after writing about such a loathsome person, but I’ll try…

It is unusual to see this type of car offered for sale on Bring a Trailer:

From the listing a picture of this stunning 1932 Packard Eight Series 902 Coupe offered for sale. As I write this, the current high bid is $50,000 with two days left in the auction.

A few years ago I would have thought nothing of this car. Recently, though, I have developed an affinity for pre-war classics. I interpret “pre-war” as meaning 1930-ish to 1941; others would have a slightly different definition.

Packard built about 3,700 Series 902 cars in 1932. The Series 902 models were powered by an inline 8-cylinder engine displacing 320 cubic inches and rated at 110 HP. This engine was the smallest and least powerful of the three Packard offered in 1932. My best estimate is that Packard built fewer than 17,000 cars in model year 1932, which was the worst year of the Great Depression. Real US GDP (meaning adjusted for inflation) fell almost 13%! The unemployment rate reached 25%! By comparison, for the “Great Recession” the worst real GDP growth was -2.9% in 2009; the worst unemployment rate was 10% in October, 2009.

If you’re here after clicking on a link in the Packard forum, welcome. Please bookmark the home page, return often and tell your friends! Thanks.

Today is International Holocaust Remembrance Day, the day designated by the United Nations through General Assembly Resolution 60/7 in 2005. On this day in 1945 the infamous Auschwitz-Birkenau concentration camp was liberated by the Soviet Red Army.

My parents were Holocaust survivors. My father watched his family murdered by troops. To all of the despicable ignoramus Holocaust deniers I have one message: Zolst Leegen En Drerd!