Wealthy people who “complain” that they are not taxed enough are just engaging in virtue signaling. If they really think they don’t pay enough in taxes then they can voluntarily give more money to government. They should keep their hands out of other people’s pockets because other people’s money doesn’t belong to them. “Fair” is subjective, but property rights are not supposed to be.

This article from Hagerty is titled, “The 25 cars buyers are forgetting about.” Below is the picture at the top of the article:

Here is a picture of the same make/model I took this past Sunday:

In case you don’t know, or even if you do, those are two pictures of the Buick Reatta. The Reatta was a failure; it cannot be described in any other way. Buick’s minimum yearly sales goal for the car was 10,000 units, but in four model years (1988-91) only about 22,000 were built in total. From Encyclopedia of American Cars by the Auto Editors of Consumer Guide®, “Reatta was a sad loss for those who appreciate interesting cars…”

It is not a performance car in any way, shape or form, but I think it is a stunning looking car. When I moved to California in the mid-1990s I needed to buy a car and went to a Buick/Pontiac/GMC dealer specifically to buy a Reatta. The salesman informed me the car was no longer in production (I wasn’t following cars much at that point having been turned off by the nadir of US autos in the late 70s) and he didn’t offer to find me a used one. Frankly, he wasn’t the friendliest salesman I ever met.

In the Hagerty article mentioned above the Reatta is shown as having the lowest Hagerty Vehicle Rating (HVR). I’ll let Hagerty explain the HVR:

“The Hagerty Vehicle Rating takes into consideration auction and private sales results, insurance quoting activity, and the number of new policies purchased to sort through hundreds of car models and compare them to the collector car market as a whole. Our valuation team then assigns each car a score from 1 to 100, with a score of 50 denoting a car that’s perfectly following the overall market trend. Popular cars that are gaining interest and value will score higher, while those with flagging interest or sale prices score lower. A vehicle’s position on the list isn’t a sign of future collectability—it’s more of a pulse marker on the current market.”

Some subjectivity seems to be a part of Hagerty’s rating, which is okay, but I always wonder about personal bias in such an endeavor. Anyway, here are the bottom 15 cars in the latest HVR (I know the article is about the bottom 25, but that seemed excessive to me):

Remember Hagerty’s disclaimer that the HVR is not, necessarily, a sign of future collectability, but an indication of where a car currently stands in the market in terms of collector demand. Some of the cars on this list are a surprise to me, but I am not a devoted student of the overall collector car market. I am also quite sure that cars with very few transactions don’t appear in the Hagerty evaluation at all. Remember, too, that this is just Hagerty’s assessment. No one metric or system can fully describe this market.

Do any of you see cars on this list in which you have interest? I would very much like to read your thoughts.

I was going to begin today’s post being very critical of people who don’t seem to understand, and who should understand, that the United States is a FEDERAL republic and NOT a unitary one. Corvette and car nut that I am I’ll just include this:

“The powers not delegated to the United States by the Constitution, nor prohibited by it to the States, are reserved to the States respectively, or to the people.”

So what does the Corvette have to do with any of this? Chevrolet has OFFICIALLY announced that the next generation of Corvette will be unveiled on July 18 and, indeed, the car will be mid-engined! This article from Car and Driver is probably as good a recap as any. Here is a photo from the article and from Chevrolet:

Notice the car is still camouflaged and notice the “8” is in red signifying, of course, the next car will be the eighth-generation Corvette or C8.

I am excited enough today not to be too concerned with copyrights so here is a good chunk of the Car and Driver article:

“This first Corvette C8 model we will see in July is the base Corvette Stingray, which will kick off the lineup. Initially, the C8 will use an upgraded version of the current car’s pushrod 6.2-liter V-8, which we suspect will be upgraded to produce somewhere around 500 horsepower. The engine will also be renamed LT2 to reflect its new location in the car. A dual-clutch seven-speed automatic gearbox supplied from Tremec is slated to be the only transmission choice—unfortunate news for #savethemanuals diehards like us. [my note: get over yourself, manual diehards, the manual is dying all over the world]

Multiple high-performance variants are set to follow in quick succession, including Z06, ZR1, and a range-topping hybrid that may use the Zora name. The current thinking is that the Z06 will have a a DOHC 5.5-liter V-8 with a flat-plane crankshaft, while the ZR1 will add twin turbochargers to that engine, and the Zora will get the twin-turbo V-8 and an electric motor in the front axle to cement its place as the most powerful Corvette, with a combined power rating that could approach 1000 horsepower.”

(By the way, it appears as though the C7 and C8 will NOT be produced simultaneously as had been previously reported. The last C7, a Z06, will be auctioned in June.)

I am very, very idiosyncratic. I like many things most people don’t like and/or have never heard of.

This trait applies to cars. While I like C2 Corvettes and second-generation Chargers I also like cars like the Buick Reatta and Cadillac Allante. I guess in one way that affinity is not so weird in that I am drawn to the looks of both cars. Who doesn’t like a pretty face? 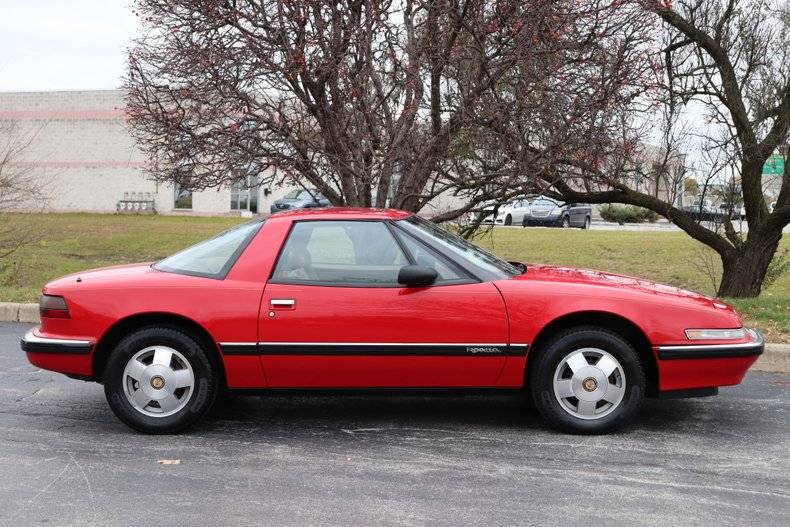 From this Hemmings listing a picture of a 1990 Buick Reatta. Many of those who have any positive feelings about the car at all prefer the convertible, but I prefer the coupe, of course. By 1990 Buick had gone back to a conventional analog dashboard and controls as opposed to the troublesome digital ones. This car has 91,000 miles and the dealer is asking $4,900. I think it’s a beautiful car and yes I know it’s not a sports car or high-performer.

From this Hemmings listing a picture of a 1993 Cadillac Allante in Verde Flax (Green) over Black. Only for 1993 the Allante was powered by a Northstar V-8 (which initially had problems with head bolts and overheating) of 4.6 liters/279 cubic inches displacement that produced 295 HP/290 LB-FT of torque. The dealer is asking $9,595.

C’mon, people! The Allante body was designed and built by Pininfarina! It’s a beautiful car, but was fraught with quality issues during almost the entire run and was underpowered at first. The engine for 1987-88 had only 170 HP/235 LB-FT.

Two beautiful cars (at least to me) that can be purchased for under $10,000. That’s Frugal Friday in a nutshell. (Maybe “case” is more like it.)

I guess people don’t read blogs on Thanksgiving. I also have never really paid that much attention to daily views before.

Despite a dramatic decline in views/visitors since about the 10th of November, this month has seen a new high for both metrics. Thanks, but I wish all of the readers who were visiting in late October/early November would come back.

People don’t really judge events by objective reality, but against expectations and compared to the status quo. Before the increase in views/visitors in late October I wouldn’t have been affected by the number since November 10, but now those metrics are a disappointment. If the Arizona Cardinals and Pittsburgh Steelers both finish with 8-8 records in 2019, for one team it would represent a great year while for the other a great disappointment even though it’s the same record.

Somewhere in this post will be the 100,000th word I have written on Disaffected Musings. I have had three books published and if my memory serves me correctly the last two were each about 100,000 words in length.

Not to make too fine a point, but in the 10 1/2 months I have been posting to this blog I have written enough for a book. Probably not coincidentally, that’s about how long it took (perhaps a little longer) to write each of my last two books.

Another picture from the Classic Auto Mall in Morgantown, PA. (No, I do not work there. It would be an awfully long commute.) This is a Buick Reatta and I confess I don’t know the year.

I have always been enamored of the looks of this car, but like the Cadillac Allante of the same period the Reatta was a GM two-seat car that was a failure. The Reatta was never marketed as a sports car or high-performance car, a fact that would exclude it from my Ultimate Garage. However, I think it would make a great “wolf in sheep’s clothing” restomod although the FWD layout might be an insurmountable obstacle.

Any thoughts from any of you on the Reatta, the Allante or any other topic? Why were both cars such failures?

My marvelous mom was born on this day in 1922. She has been gone a long time, but I think about her every day. She had a rough life as a Holocaust survivor and displaced person (recall from this post that my parents married in a Displaced Persons camp and that my older sister was born there), but she carried on as a loving mother and grandmother.

I am thinking of dancing with the devil. I have been considering establishing a Facebook account in order to promote this blog. I have severe misgivings, but Facebook is the platform and if I want more people to read, to comment, etc. then I am beginning to think I have to use them, as much as I despise them. What do you think?

From cargurus.com a picture of a Buick Reatta, another General Motors failure of the 1980s/1990s. I know the Reatta is not a performance car, but I love the way it looks. I figure I could improve the performance somehow if I were to acquire one. Innovative Performance Chips is a company that sells engine tuning chips and even, supposedly, offers such a product for the 3.8 liter V-6 Reatta engine. They claim up to 35 additional HP (no mention of increased torque) AND up to five more MPG with their product. I am skeptical, but +15-20 HP and +2-3 MPG would be fine.

When I moved to California in the mid-1990s, I purchased a car from a Buick/GMC/Pontiac dealer. I really wanted to buy a Reatta, but they were no longer being manufactured and the salesman did not want to find me a used one. Fewer than 22,000 Reattas were produced during the four model years it was offered, 1988-1991.

I hope to read comments from you on these or any other topics discussed in this blog.