First, some thoughts on an unrelated topic. It is obvious to me that the College Football Playoff (CFP) should consist of eight teams, not just four. These eight teams should be the champions of the Power Five conferences and three at-large teams. In that way, the CFP committee would only have to choose three teams (instead of the current four) and seed the field.

I also believe that WAY too many bowl games are staged. A 6-6 team should not be in a bowl. I think that, besides the obsessive search for revenue, bowls for 6-6 teams reflect a disturbing, yet growing, trend in America: rewarding mediocrity. I would limit the number of non-playoff bowls to eight. In that way, the best 24 teams are playing after the regular season ends, reflecting the top 25 polls conducted during the season.

Second, many thanks once again to 56packardman for persevering through some technical issues with the Studebaker Drivers Club (SDC) website and posting the link to yesterday’s Disaffected Musings post. Thanks to the SDC readers (and those mentioned in the next paragraph) for voraciously clicking and reading, which led to the highest number of views in at least two months.

I also want to thank those clicking from Driven To Write after I posted the main link to this blog in a comment. To all of those who read this blog yesterday and/or are reading this today, please consider signing up to follow the blog or saving the link as a bookmark or telling your friends about the site or posting thoughtful comments OR all of the above.

Once again, from 2019 Collector Car Price Guide by Krause Publications I scanned the values for all Packards to find the most valuable one. Once again, while I appreciate the effort needed to compile such a book (I don’t know where else one could look up the value for a 1906 Locomobile), I take the values with a grain of salt. However, this is the only source I know where all of these values are in one place.

One disclosure: one value seemed anomalous to me (the value for a 1933 Model 1006 Custom Twelve family sedan bodied by Dietrich), so I chose not to name it as the most valuable Packard. Instead, this magnificent car gets the nod: 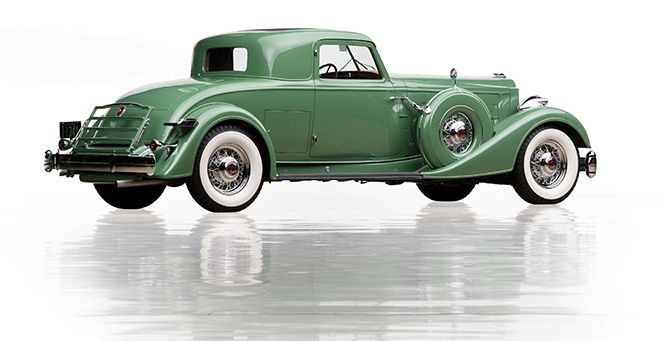 From Pinterest, a picture of a 1934 Packard Twelve Model 1108 coupe bodied by Dietrich. According to the 2019 Krause book one of these in concours-quality condition is worth…$4,180,000. I suspect that given the rarity of these cars (only five are known to exist) Krause used the result of an auction held by RM Sotheby’s in 2015 to establish the value. That car sold, all in, for…wait for it…$4,180,000.

56packardman, and others, can tell me if I am wrong to dismiss the 1933 Model 1006 Custom Twelve family sedan bodied by Dietrich. I can’t imagine that car looks as good as this one, though.

6 thoughts on “Most Valuable Packard”