It should be obvious that I hope my blog is thought provoking almost every day. A quasi-plea: while I do not and will not have a Fack Fucebook account, I would not object if those of you who do would post the main link to the blog (https://disaffectedmusings.com) or links to specific posts on the “platform.” As I have recounted, my mother used to recite a Polish saying, which when translated into English was, “If you need the thief, you take him down from the gallows.” I am just asking; if you feel this “request” is hypocritical, then feel free to ignore and/or let me know you feel that way.

I was going to call today’s post “Fish Or Cut Bait.” I would have then written that I really wanted to call the post “Shit Or Get Off The Pot,” but that I did not want to use “profanity” in a post title.

Without getting into specifics or naming names, I know people who engage in Analysis To Paralysis. EVERYTHING has diminishing marginal utility, though, often to the point of having zero or even negative marginal benefit.

One can never really have all of the facts. One criticism of the classical economic model is that agents (people, firms, etc.) can never really optimize behavior because they can’t know everything. Famous economist Herbert Simon introduced the idea of “Satisficing.” He applied it to the behavior of firms, but it also–obviously–applies to individual behavior. After all, businesses are just collections of individuals.

Classical economic theory assumes that firms attempt to maximize profits, but the ideas associated with satisficing question this assumption. A satisficing firm is not attempting to maximize anything, but it is trying to achieve an acceptable level of a single objective or an acceptable mix of other objectives, of which profit is only one. It represents a solution to the problem of not being able to establish an optimal decision regarding business decision-making since an “optimal” decision cannot be determined.

As I have written, I firmly believe that time is more valuable than money, especially when one reaches my age. My time is finite, but I can almost always figure out a way to acquire more money. For example, not that I anticipate this scenario will occur (and certainly hope that it doesn’t), but I could decide to collect my Social Security retirement benefits if I found myself in a financial bind. I am 62, the minimum age for collecting those payments.

All this being said, I am not advocating acting impulsively and without thought as one’s primary decision-making paradigm. All I am saying is that EVERYTHING has limits, including analysis and thought. At some point you have to Fish Or Cut Bait, Shit Or Get Off The Pot.

“Fish Or Cut Bait” would also have applied to getting the Hall of Very Good Cars series started. I am 99% sure that I will publish that series concurrently with Threes And Sevens, which has only five posts remaining, anyway.

I am not saying this car will be included in the Hall of Very Good Cars, but I have been fascinated by it ever since seeing the episode of Wheeler Dealers where the car was featured. 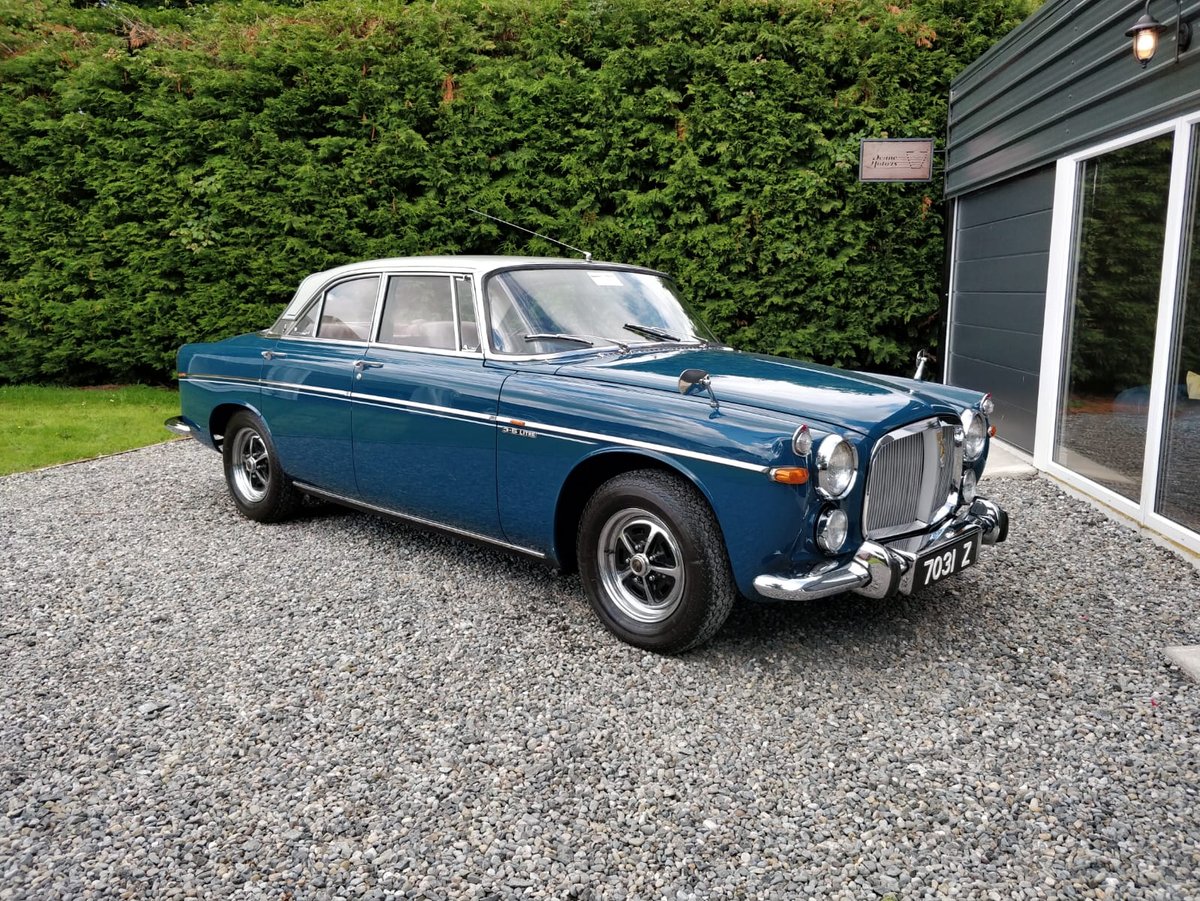 No, your eyes are not deceiving you. Yes, this car–a Rover P5B–has four doors. Interestingly though (OK, maybe it’s only interesting to me), the car is called a Coupé. I believe the original distinction between a coupe and a sedan had to do with interior volume and not the number of doors.

The stock engine for this car was a small displacement, 3.5 liter/215 cubic-inch, aluminum V-8. Maybe I should have written aluminium. This was the Buick engine used in the “Senior Compact” line for Buick, Oldsmobile and Pontiac from 1961 through 1963. Rover acquired the tooling to the engine in 1965 (General Motors discontinued production after the 1963 model year) and used it in at least one of their vehicles until 2006. Rover also sold the engine to companies like Morgan, TVR and Triumph.

Something about the lines of the P5B is just mesmerizing to me. The example in the Wheeler Dealers episode also had a similar paint scheme to the one shown, a light color roof over a darker body.

Anyway, as the list of Hall of Very Good Cars continues to grow, at some point I will also have to Fish Or Cut Bait, Shit Or Get Off The Pot. As always, I welcome thoughtful comments.