Many thanks to those of you who read the blog the past two days. The two-day total for views was the highest for any such period in the last month. I even received the “Your stats are booming!” notification from WordPress yesterday.

Spurred by Dirty Dingus McGee’s efforts I made a contribution to Arizona Food Banks. Please consider donating to the charity of your choice to aid those less fortunate.

I thought I would return to this blog’s roots–such as they are–for today. I actually think that the amount of automotive content and the number of views are inversely correlated, but there you go.

I have little doubt that I have expressed the following views and shown the data below in previous posts. However, after 1,560+ posts and about 825,000 words I don’t even remember what search terms would find those posts.

Some have opined that Studebaker’s demise was inevitable after the bankruptcy and reorganization of 1933. Perhaps that is the case. However, the company did not do everything wrong in the interim. I want to show that the Hawk series was viable, at least initially, and that as memorable as the Avanti was, its introduction may have killed the Gran Turismo Hawk.

Consider this data comparing the Hawk series in its first two model years to its closest competitor in the US market, the Ford Thunderbird.

Even with Ford’s advantages in size and marketing clout, the Studebaker Hawk series–despite four different variations being offered in 1956–matched the T-Bird sale for sale. Of course, in 1958 the Thunderbird became a four-seater. Yes, the Hawks were always four-seaters, but the Thunderbird was still the closest analogue for 1956-57. OK, a photo. 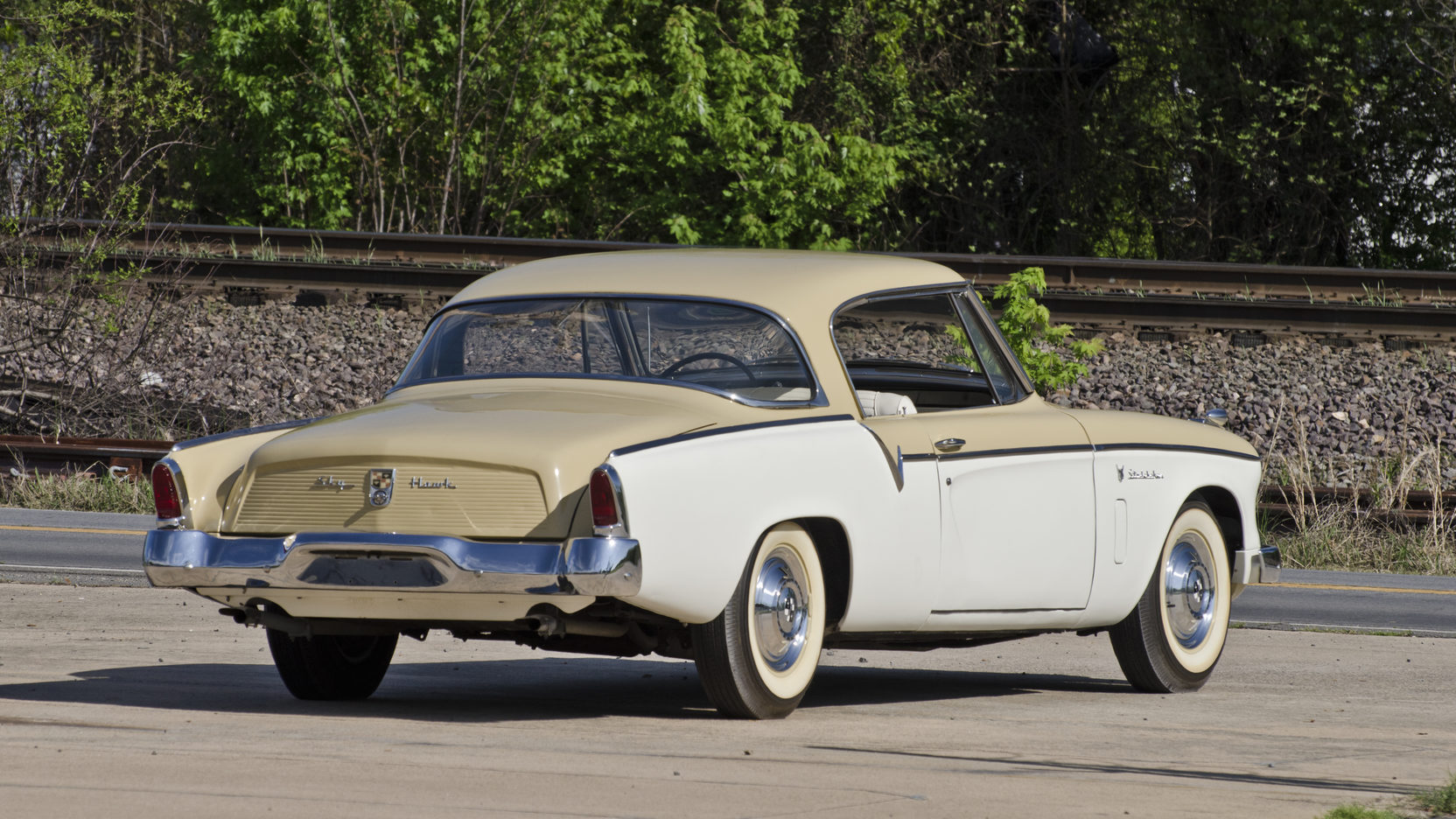 Just like the Baby Birds have aged well, I think these Hawk models still look good also. While the larger Thunderbird introduced for the 1958 model year sold much better than its two-seat predecessors, in the present it is not as desirable as a collector car.

However, Hawk sales declined by 58% in 1958 to about 8,200. Whether it was the sharp recession of 1957-58 or the increasing rumors of Studebaker’s demise, the cars lost favor with the American public.

By 1961 sales of the Hawk–by now just one model as opposed to the four available in 1956–declined to just 3,900 (including exports). The automotive press figured the car was doomed, especially since Studebaker’s “renaissance” due to the Lark had faded. Little did anyone know what Sherwood Egbert, Studebaker CEO/President, and talented designer Brooks Stevens had in store. 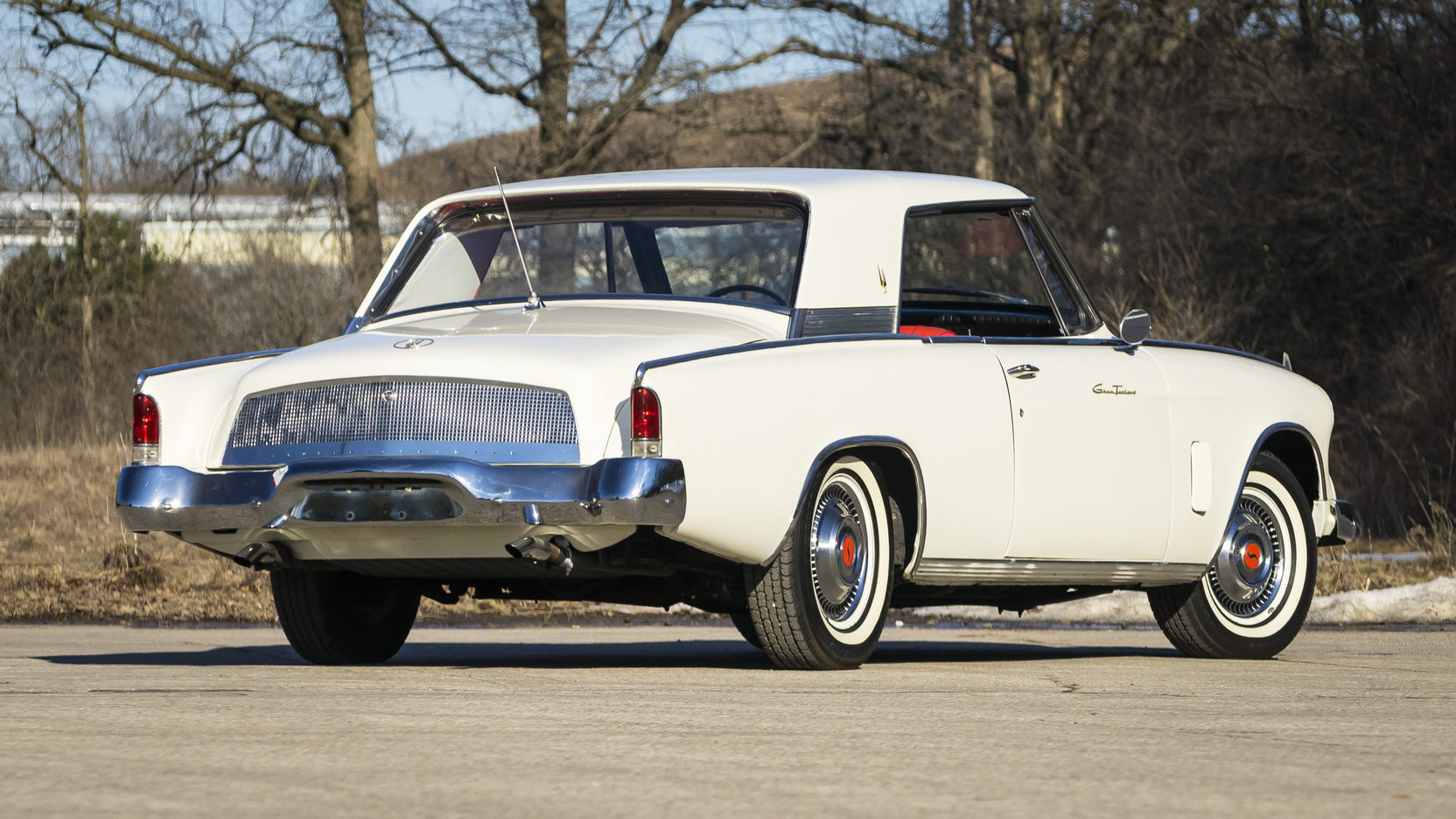 The similarities in the two cars is unmistakable, such was the timelessness of the original “Loewy Coupes” which were actually designed by Robert Bourke, but the Gran Turismo Hawk had just enough changes to remain fresh.

While sales of the Gran Turismo Hawk didn’t reach those of the first two years of the Hawk series, sales improved by 138 percent compared to 1961 to more than 9,300.

The Avanti is hailed today as Studebaker’s brilliant, but doomed last gasp. Believe it or not, it was not perceived as the company’s salvation by all of those working for Studebaker. I believe the introduction of the Avanti doomed the Gran Turismo Hawk, which could have continued in production after the South Bend plant was closed as some GT Hawks had been produced in Canada.

Here are some thoughts by Otto Klausmeyer, who served as Assistant Production Manager for Studebaker for quite some time, courtesy of Studebaker 1946-1966: The Classic Postwar Years by Richard Langworth:

“The painful truth was that although we had very serious body difficulties, they were soon overcome and unsold Avantis were all over the shop and in dealer’s hands…The verdict of the public was conclusive and quite unmistakable. They didn’t want any part of it…The fastback prototype should have been built instead of the Avanti…Yet the Avanti was in production and had been abundantly rejected by the public, before the sedan prototypes were finished.”

The Avanti had a revolutionary exterior design, and still looks good today, but it was built on a beefed-up Lark chassis and cost Studebaker $3.5 million to develop that it really didn’t have. Here are some words by Langworth:

“But had Avanti been introduced by Chevy, as the new Corvette–and then been followed a year later by sedan derivatives named Chevelles–who can doubt GM would have met with success?…Deciding to build an Avanti would have been little risk for GM, but it’s easy to make the one hundredth straight right decision, after the first ninety-nine.”

After losing significant market share for almost all of the 1950s, Studebaker was basically doomed no matter what they did. My relatively newfound preference for the Gran Turismo Hawk is, no doubt, clouding my judgment.

As always I welcome thoughtful comments. Please keep reading and please tell your friends. Thanks.