“The name [Wednesday] is derived from Old English Wōdnesdæg and Middle English Wednesdei, ‘day of Woden’, reflecting the pre-Christian religion practiced by the Anglo-Saxons, a variation of the Norse god Odin. In other languages, such as the French mercredi or Italian mercoledì, the day’s name is a calque of dies Mercurii ‘day of Mercury.'”

Maybe millennials are not committed to central cities, after all…this CNBC article mentions that, according to the Census Bureau, 2018 was the fourth consecutive year in which a “noticeable decline” occurred in the millennial population of major cities. A 2018 Ernst & Young survey of 1,200 adults aged 20-36 found that more people in this group are buying homes in the suburbs than in cities.

In Sunday Suburbia I expressed my preference for living in the suburbs. I also noted that the suburbs have been the most populous part of the US in every census since 1970. Given the trends mentioned in the CNBC piece I guess that won’t be changing any time soon.

A relevant chart showing the 1950 and 2010 central city populations for a few selected locales:

Yes, some of the loss of population in these cities is due to migration to other metro areas, but much of it is simply a move to the suburbs. For example, Baltimore’s central city population declined by about 16% from 1990-2010, but the metropolitan area population (which includes the central city) increased by about 14%. Sorry to change time frames, but I can’t find metro area populations for 1950 and I wanted to show the full scope of population decline for these cities, which began shortly after the end of World War II.

So, two of the three books about Studebaker have arrived; the other will not be delivered as the order has been cancelled by Amazon due to a “technical problem.” As I order more and more items from third-party sellers I have encountered more difficulties in order fulfillment.

One of the books that was delivered was this:

In all honesty I only ordered the book to get more information about and more pictures of this car:

From blog.consumerguide.com a picture of a Studebaker Gran Turismo Hawk, the automobile with which I am currently obsessed. (OCD is a bitch even if it’s OCD-lite.) A slight disappointment is, except for the front and back covers, all of the photos in the Reynolds book are in black and white.

Do any of you have your own obsessions that you would like to share? I promise that no one will judge…

Thanks to 56packardman for making the effort to post a link to yesterday’s Disaffected Musings entry on the Studebaker Drivers Club forum and thanks to the avid followers of that forum for clicking on the link in such numbers that the number of views yesterday was the highest in over a month. (Yes, that’s a run-on sentence.) As is my penchant and one of my weaknesses I can’t resist poking the world in the eye with a stick; I think that the number of blog views for yesterday should be at the low end of the usual range for this blog and not the high end.

On this day in 1956 the last Detroit-built Packards rolled off the assembly line. From Packard: A History Of The Motor Car And The Company edited by the late, great Beverly Rae Kimes, “On that sad day, June 25th, 1956, twenty-four Clippers and eighteen Packards were run through the body shop and completed. Altogether, there had been 28,835 cars built for the 1956 model year—18,482 Clippers, 10,353 Packards.”

How much blame Nance bears for the end of Packard is another topic for another day. 56packardman is free to offer his opinion on the subject as is anyone else reading.

A picture of a 1955 Packard Caribbean convertible that I took during our recent trip to the AACA Museum.

I dare anyone to tell me why this next car looks dated. To me it doesn’t look much different from its contemporaries at The Big Three.

This is a 1964 Studebaker Daytona convertible of which only 703 were made. I don’t remember if this car is owned by the AACA Museum or on loan. I discovered that the museum does sell 3-4 cars a year. Their basic donation agreement stipulates only that they must keep the car for a minimum of three years.

I have asked this question before, but what is the source of my obsession with defunct American car companies? I really don’t know so I am willing to read any answers you might offer.

Not so much musing as gawking… 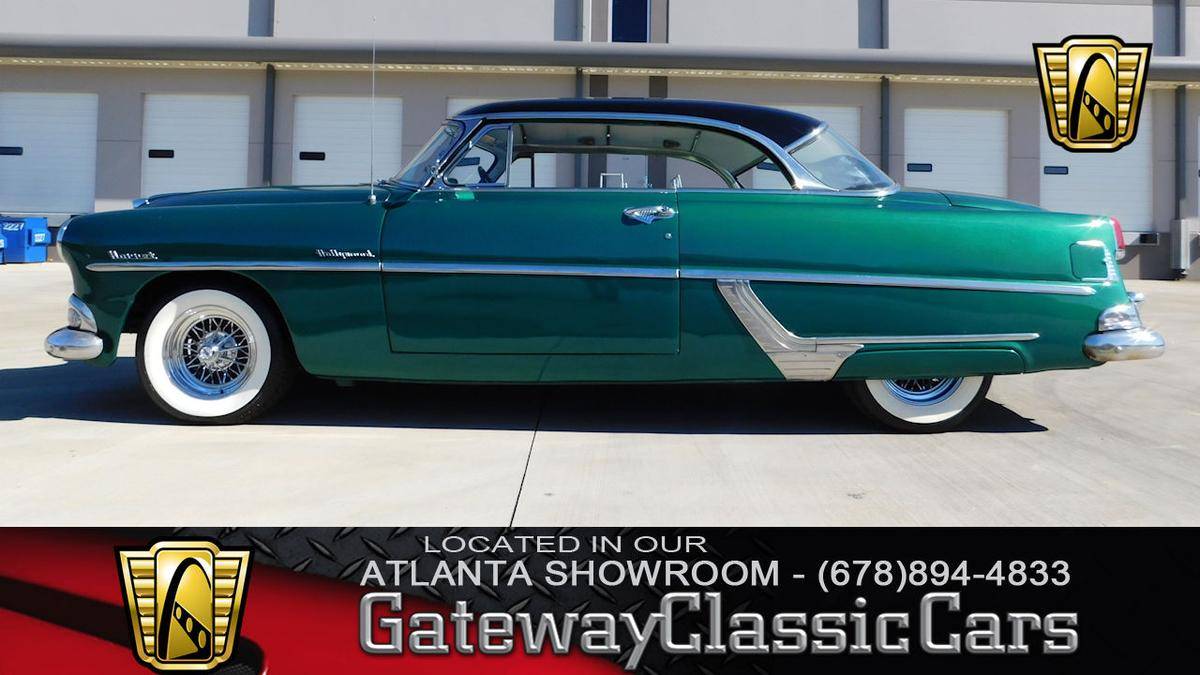 From hemmings.com (https://www.hemmings.com/classifieds/dealer/hudson/hollywood/2069232.html) and, obviously, for sale by the Atlanta franchise of Gateway Classic Cars. This is a 1954 Hudson Hollywood coupe. For the nth time, I am obsessed with defunct American makes so this is appealing beyond the obvious by virtue of its being a Hudson. The asking price is $30,995. Wow!

By the way, a subscription to Hemmings is worth the cost, but much of the content is available for free. If you’re a car nut like I am, Hemmings is a great site.

I am obsessed with defunct American car makes, such as Packard, Studebaker and Pontiac. Why? What shapes our interest in anything? I believe it is a combination of genetics and environment.

A picture like this (from Hemmings and, obviously, Volocars.com; https://www.hemmings.com/classifieds/dealer/desoto/firedome/2016958.html) makes my day. This is a 1956 DeSoto Firedome. I have developed a real affinity for 1950s American cars, but the fact that this is a DeSoto makes it even more appealing to me.

I own and have intently read books on Packard and Studebaker. I will probably buy books on American Motors and fervently wish a complete history of Pontiac were available. In general, why am I so interested in cars? Is (was) it an attempt to bond with my father, even though he has been dead for 25 years? My father was an auto mechanic who owned and operated a service station in the days when those businesses sold gas and fixed cars, not gas, snacks and lottery tickets. No inanimate object captures my attention as much as cars. Honestly, I’m not sure I even want to know why that is so. What difference does it make, anyway?

From conceptcarz.com a picture of a 1930 Packard 745 Deluxe Eight. I don’t know why, but a picture of a similar car built by Cadillac would not be as interesting to me.

Besides automobiles (I assume you’re interested if you’re reading this), in what other subjects do you have interest? Why do you think you’re interested or do you even care? I would very much like to read your opinions.