Another disturbing dream…I was attending a gathering that seemed to be part business and part leisure. This event required staying on the grounds at least one night.

As I got ready for bed I suddenly became aware of the presence of a large wolf in my room. I climbed onto the highest table in the room in order to fend off any potential attack. The wolf was able to leave the room and return through a door on the other side from where I had entered. The wolf would jump to try to bite/attack, but each time I was just able to avoid it. At some point in the dream I began to scream for real and my wonderful wife woke me up. Unfortunately, even though I was able to return to sleep, I still have the memory of this dream.

All I can write is WTF?!

I haven’t forgotten about In Or Out? I have two submissions from readers that I will use in the near future with the proviso that if the first car fails to receive at least five votes, then the feature will be discontinued. This blog will be better if it’s more interactive and given the surge in views/visitors since the beginning of April, the audience is there for more interaction.

The famous AACA (Antique Automobile Club of America) Hershey, Pennsylvania swap meet has been cancelled for this year. Under the three-tier guidelines set forth by Pennsylvania’s Governor, gatherings of more than 25 people are currently prohibited in Dauphin County, which includes Hershey and which is now in the yellow tier. Even the green tier, the most lenient and open level of the reopening system, would allow gatherings of no more than 250 people. The Hershey swap meet regularly attracts an estimated 200,000 people to the region every year throughout the Fall Meet week.

Ironically for me, the size of the meet has been a large obstacle to my attending it. When it returns (hopefully) next year, I will no longer be within driving distance.

On this day in 1946 the Kaiser-Frazer Corporation began producing cars at the famous Willow Run assembly plant that had been built by Ford for the mass production of heavy aircraft, particularly the B-24 Liberator (the “B” in B-24 means the plane was a bomber). Formed from the leftovers of the Graham-Paige automobile company, Kaiser-Frazer made inroads in the automobile market at first achieving a 4%+ market share for model years 1947 and 1948. The new Frazer was awarded the Fashion Academy of New York Gold Medal for design achievement.

Unwilling and/or unable to keep with innovations like a V-8 engine, convertibles—although the rare Frazer Manhattan of 1949-51 was the last four-door convertible made in the US until the new Lincoln Continental of 1961, the company didn’t really focus on ragtops—hardtop coupes with no visible B pillar or station wagons, the company’s market share faded to 2% in 1949 and despite a dramatic restyle for model year 1951 and the discontinuation of the Frazer make after 1951 to concentrate on Kaiser, the company stopped making cars in the US after 1955 after losses approaching $100 million.

As I have written here before, although I don’t know if it was company co-founder Henry Kaiser or his son Edgar who made the remark, one of them said, “Slap a Buick nameplate on it and it would sell like hotcakes.” From Hagerty Insurance a picture of a 1947 Frazer Manhattan: 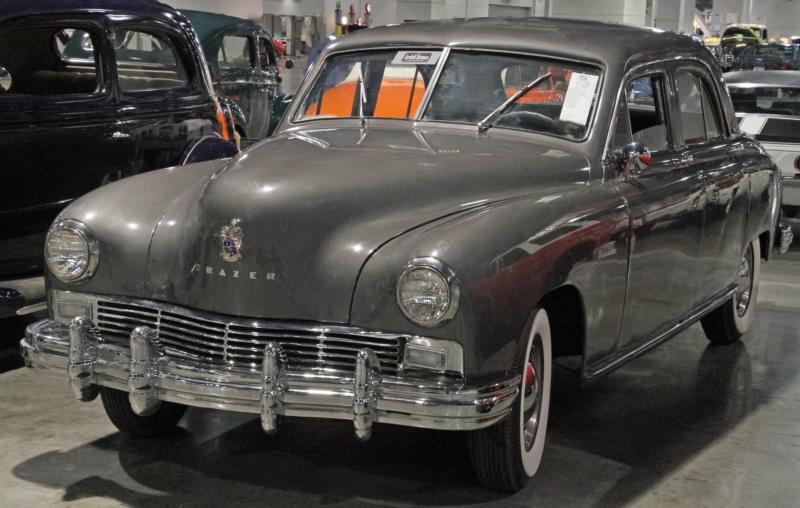 From my picture of part of our garage wall (one of the pictures that appears on the header of this blog) note the reproduction Kaiser-Frazer service sign.

I would love to see another company besides Tesla try to compete with The Big Three, but that’s a pipedream.