I was going to call this post Entropy Thursday, but realized that title would reduce blog views by at least 30%.

This blog is technically anonymous, but I am going to show a picture of me. WARNING: Disturbing Content…

Can’t say I didn’t warn you…when people “Like” posts or sign up to follow my blog I usually look at their blogs to see if I want to follow them. Unfortunately, I usually find myself not interested in their content. Almost two years ago, I think, someone liked a couple of my posts so I went to their blog. It consisted of nothing but provocative selfies of an admittedly curvaceous woman (she was clothed) with her phone always covering her face and the “content” consisted of nothing but pablum, and I don’t mean the cereal, about “self-help.” I have to admit that I am less than impressed by the vast majority of the blogs I read. That’s why I still believe, and this is true even with the surge in views/visitors since early April, that Disaffected Musings should have more readers.

Speaking of readers, while June’s totals for views and visitors will not match the records set in May, June has already seen a record number of comments for a month. I am grateful for the interaction. I want to especially thank photobyjohnbo, Dirty Dingus McGee and Philip Maynard. Those three readers account for 55 percent of the last 500 or so published comments by someone other than me. I am responsible for about 48% of all published comments because I like to respond when someone takes the time to submit a comment.

The following is an article I wrote 25 years ago that was published in a “football analytics” book. The title is “Albert Einstein Would Love This Stuff.” I apologize if some of it is difficult to read; this will be easier to read on a large desktop monitor. Oh, I covered the byline. Remember, this blog is still technically anonymous. 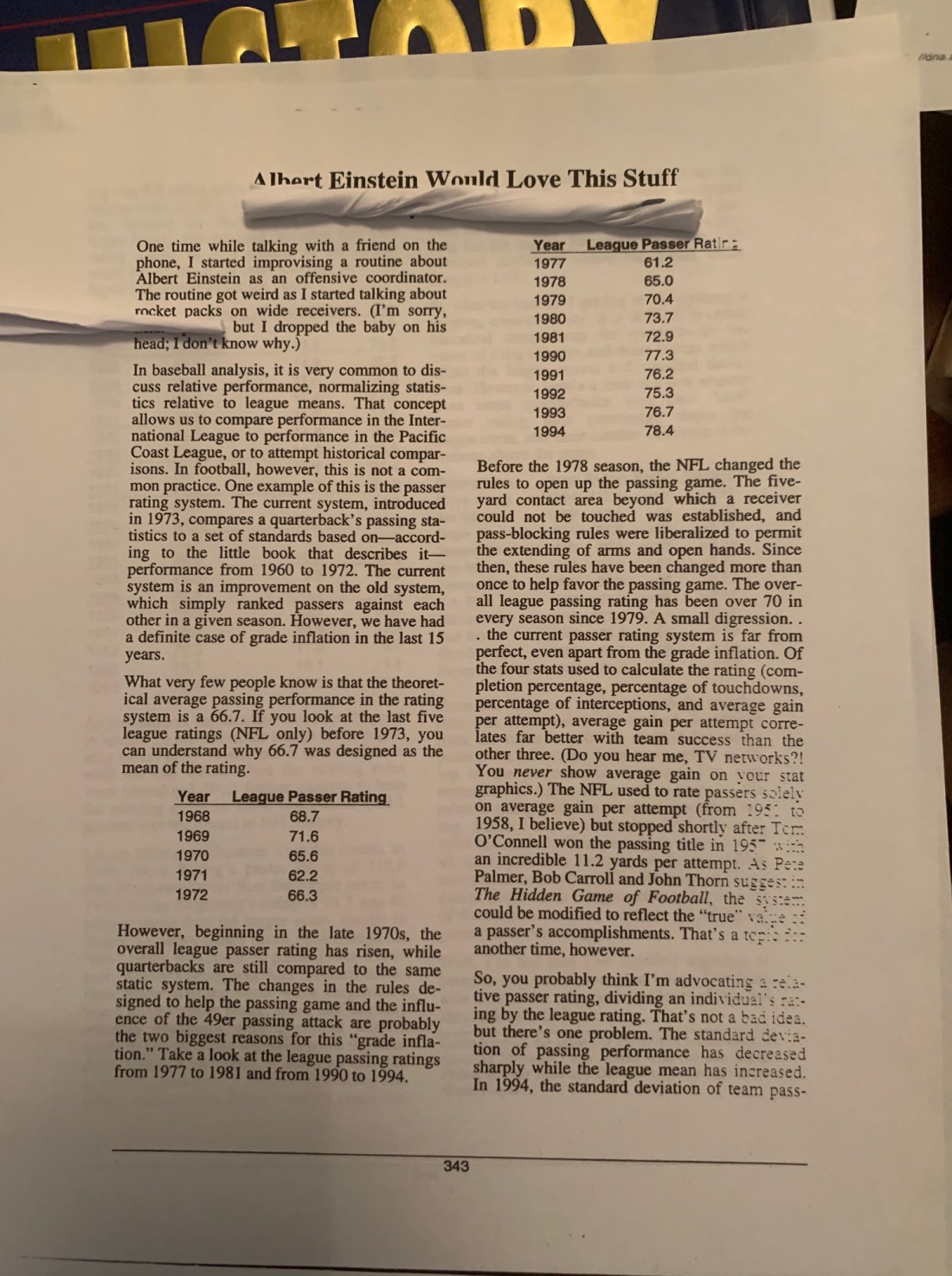 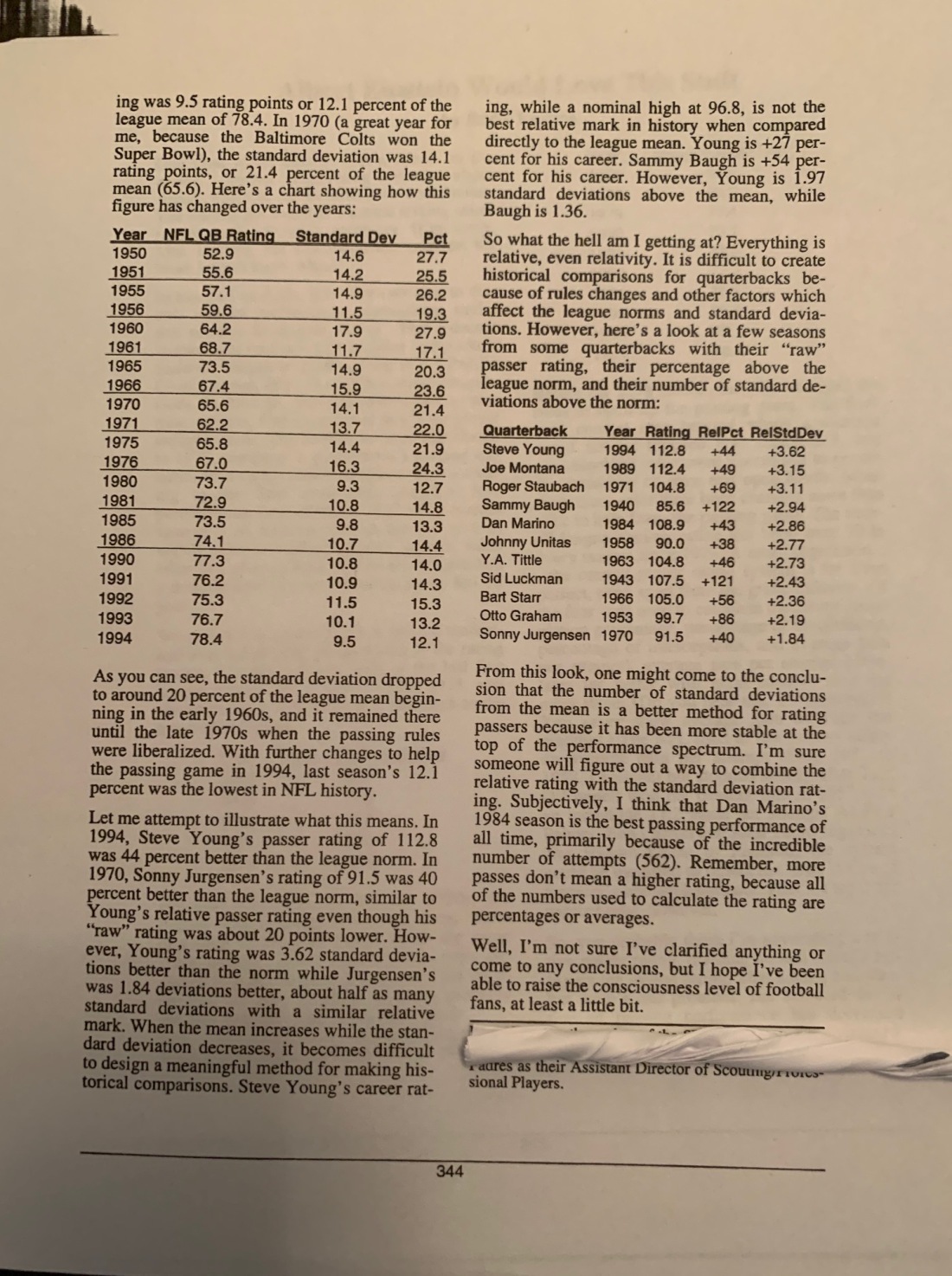 Everything is relative, even relativity. I still think I would bring value to an auction house like Mecum or Barrett-Jackson creating content for them like this article although, of course, about cars and not about football. Oh, the NFL league passer rating is now over 90. The grade inflation has continued.

Speaking of cars, from GM Authority a picture of a 2020 Corvette. Do I need reasons to show one? Well, read below the photo.

From this Carbonhans Blog article comes the “news” that the C8 Corvette ranks 8th on 2020’s Most American Cars Index. That ranking, the American Made Index or AMI by Cars.com, “is an independent annual list that ranks the new vehicles that contribute most to the U.S. economy based on criteria ranging from U.S. factory jobs and manufacturing plants to parts sourcing.” In an example of modern supply chains, three of the top ten vehicles on the list are manufactured by Honda at their Alabama plant. The Corvette and the Chevrolet Colorado pickup truck were the only two General Motors vehicles on the list. Remember that manufacturers are required by law to annually report the percentage of US and Canadian parts and that information appears on the window sticker of all new vehicles sold in the US.

Cars.com also reported “70% of shoppers consider a car’s impact on the US economy a significant or deciding factor in their vehicle choice and the COVID-19 pandemic has increased the desire of Americans to “buy local.” The survey found that nearly 40% of consumers report they are more likely to buy an American-made car due to the current health and economic crisis, while just 4% said they were less likely. A whopping 26% said it was “unpatriotic” to buy a non-American-made car, compared to just 18% in 2019.”

From this Corvette Blogger piece comes the news that, not surprisingly, the C8 Corvette is “loaded” with modern composite materials. A website called Composites World has published a two-part look at the role composites play in making the 2020 Corvette one of the top supercars in the world, regardless of price. 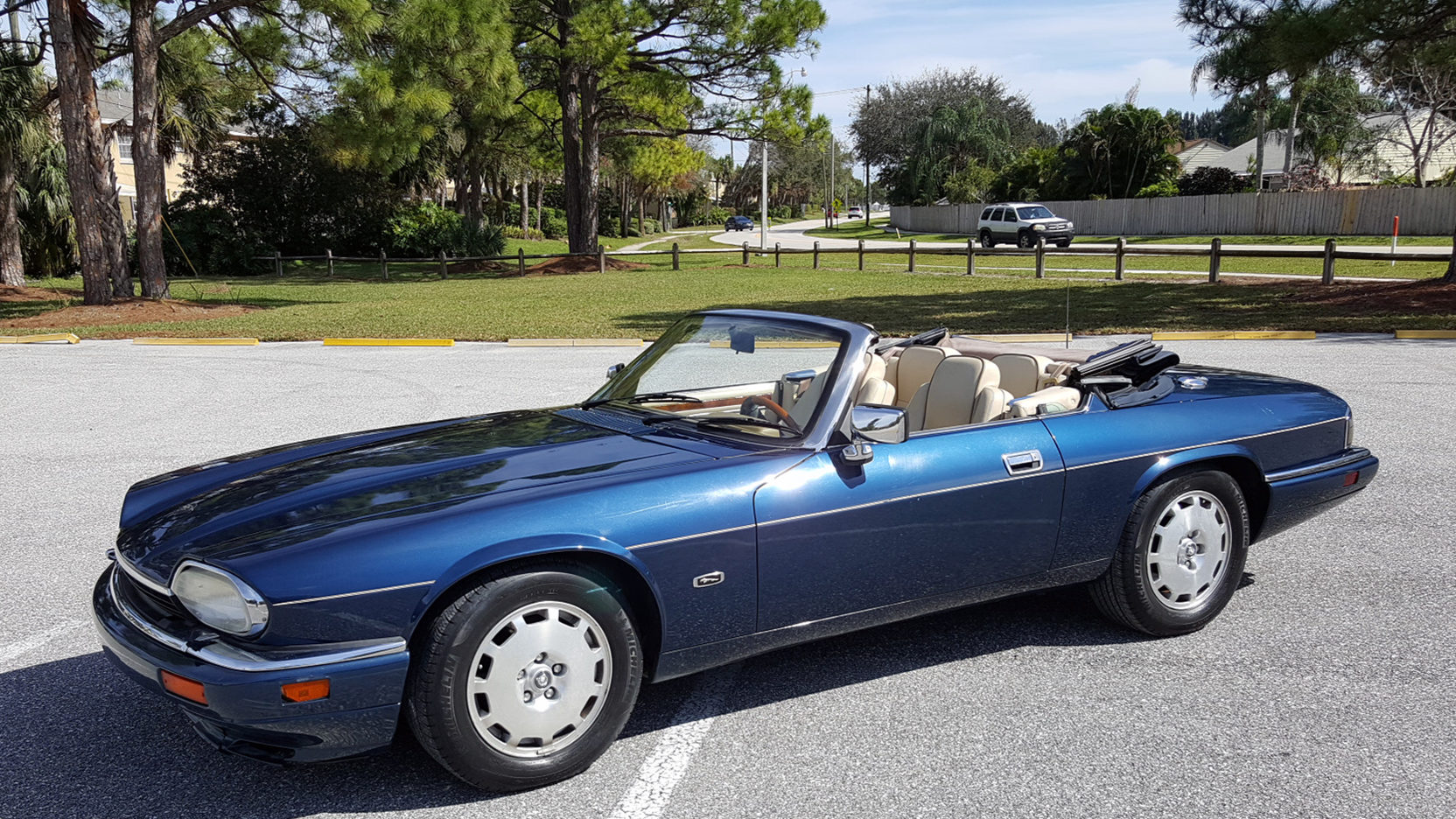 Although I awoke this morning without a fever for the first time since before receiving the Shingrix vaccine last Saturday, I still don’t feel well. I am very weak and fatigued.

Anyway…NBCSN televises the Mecum auctions, both live and in reruns. Since Mecum holds 10+ auctions a year, it is easy to find one being televised, assuming one has NBCSN on their TV package.

My wonderful wife and I have attended auctions from both companies. In person, the Barrett-Jackson experience was superior, in our opinion. There was more excitement in the crowd and the pace kept the action moving.

On TV, however, I prefer watching the Mecum auctions. The hosts are knowledgeable, don’t take themselves or the auction too seriously and seem to be having a good time. The Mecum telecasts are fun to watch.

In my opinion, the Barrett-Jackson telecasts are stuffier and the hosts don’t seem to be having as much fun. Despite the presence of the amazingly beautiful Cristy Lee (who isn’t on-screen very much), the telecasts often display a lack of energy.

Of course, all of this is just my opinion. Do any of you watch car auctions on TV? If so, what are your thoughts?

You can figure out what this article is about. The writer, of course, had to insert the obligatory “while we still love manuals.” Manual transmissions are like dodos; they’re going extinct. However, because so many have been made their road to extinction will be slow.

January, 2022 Update: My preference has changed in that I now prefer to watch and to attend the Mecum auctions as compared to Barrett-Jackson. That being written, my wonderful wife and I will still attend the upcoming Barrett-Jackson auction in Scottsdale later this month.

Our becoming friends with Scott Hoke and John Kraman in the last couple of years is no doubt a factor in my preference for Mecum live and on TV, but is not the only factor.