Happy Birthday to my wonderful wife and my sweet sister! Yes, they have the same birthday and it’s two days after mine.

I was remiss in not noting that yesterday was the third anniversary of my taking delivery of my 2016 Corvette Z06. I have driven the car about 10,400 miles, 3,800 miles in the mid-Atlantic and 6,600 miles in Arizona. In about two months I will have owned the car as long here as I did there.

I have to admit that, on occasion, I wonder why I am obsessed with acquiring a “companion” for my car. Without trying to ruin my karma, my Z06 is easily my favorite car among all of the cars I have owned, which I believe now numbers nine cars. That includes the one SUV I have owned outright, my 1988 Chevrolet Blazer, but not the SUVs I have owned jointly with my wonderful wife. Four of the nine vehicles were purchased new.

Here is a collection of links to posts from Why Evolution Is True, some of which I have been “saving” for quite some time:

The first words of this post are, “. . . well, not all speech—just the speech that the editors of the student newspaper The Cavalier Daily don’t like.”

Here is a link to a video, courtesy of Mac’s Motor City Garage, of the knowledgeable Jason Fenske explaining why corn-based ethanol is a bad idea. From the brief text accompanying the link:

“The major benefit that corn ethanol originally promised—a net reduction in carbon dioxide emissions—is proving to be an illusion, at least according to recent studies from the University of Wisconsin and Harvard Law Research.”

For those blinded by ideology the operative axiom is never to let the facts get in the way of a priori beliefs.

Here are some photos from the recently concluded Mecum auction in Glendale, Arizona. Their next auction, from Houston, begins in just three days. 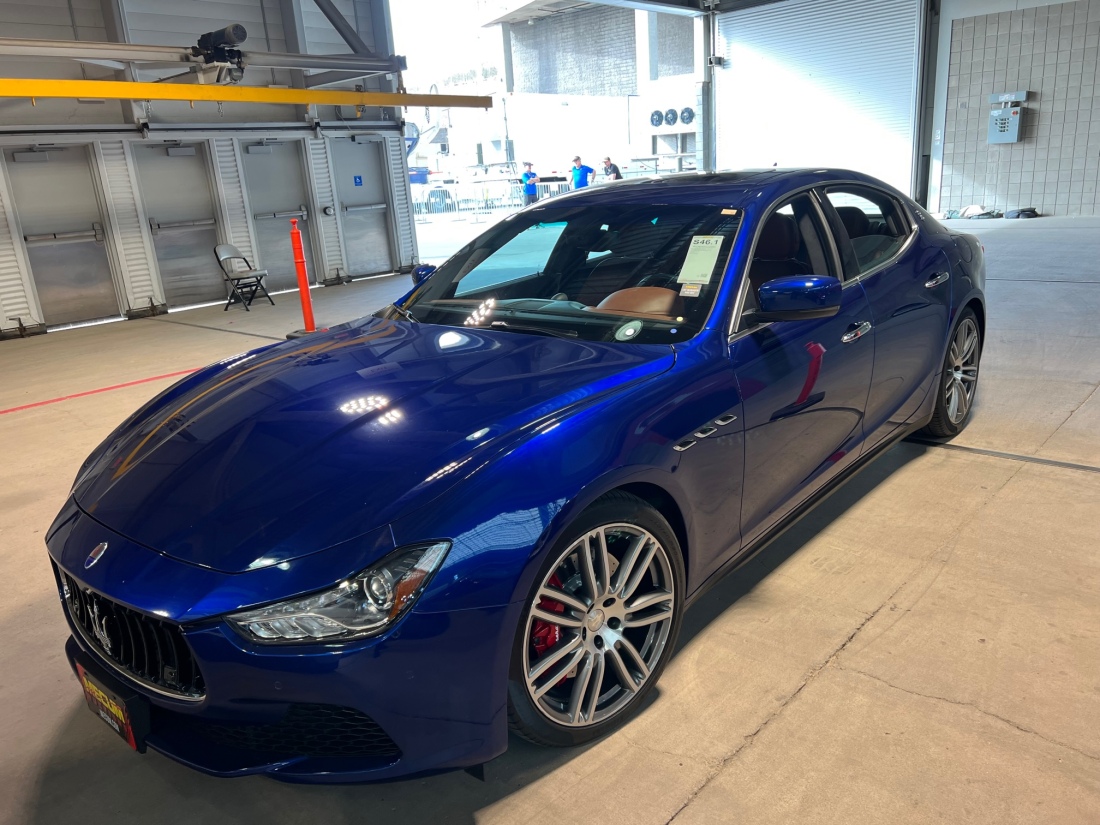 I took this photo two days after my very pleasant conversation with the lovely Katie Osborne. 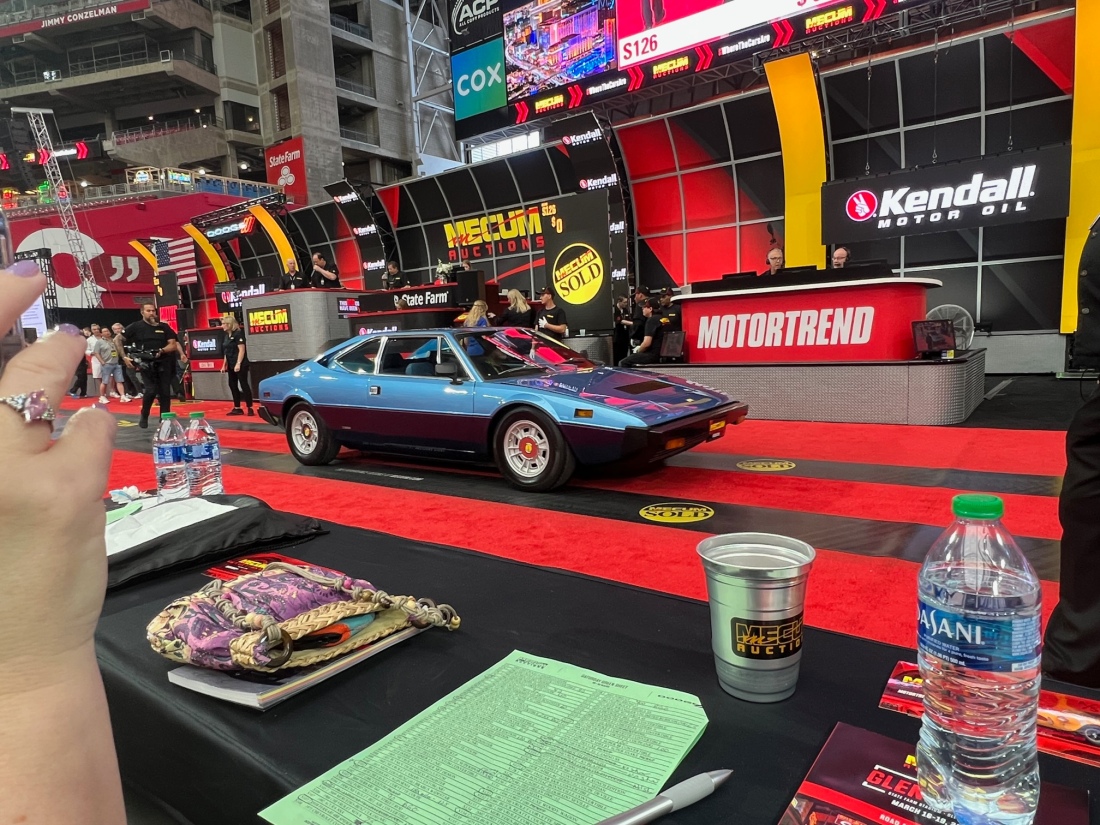 It wouldn’t be a major car auction without some C2 Corvette restomods. This beautiful 1965 Vette restomod on a custom chassis sold for $231,000 all in. This year’s Glendale auction had the highest total sales and highest attendance of the four held at this venue.

I may or may not post tomorrow. My next post will be the last installment of the Cars A To Z series with the “X” “Y” and “Z” cars being shown together.

First, a couple of other items…it certainly has been a very active off-season in the NFL. Given the Aaron Rodgers “saga” and the trades of Russell Wilson and DeShaun Watson, in terms of news and activity regarding high-level quarterbacks the past few weeks may be unprecedented. Oh, the retirement and un-retirement of Tom Brady fits in there, also.

The fact that the Browns traded for Watson, giving up a huge bundle of high draft picks AND fully guaranteeing over $200 million in compensation, the latter is unparalleled in NFL history, shows that teams will ignore almost anything to acquire a player they deem to be outstanding and one who can push them towards a championship. Talent wins out.

When I worked in baseball we often spoke of the PQ to AQ ratio. PQ meant Playing Quotient while AQ meant *ssh*le Quotient. The higher the PQ the higher the AQ teams would tolerate. What Watson is alleged to have done is beyond being an *ssh*le, but the concept is the same. This chart showing my ranking of NFL quarterbacks passing performance for 2020, the last season Watson played, is an illustration of why the Browns were willing to do what they did.

TOTSC is a metric that combines how far above the league average a quarterback is in terms of the two individual stats that matter most: yards per pass attempt and interceptions. The league dispersion, or distribution, of those variables is also part of the analysis. Yes, the talent and coaching surrounding a quarterback are factors in his statistical performance. A side note: the fact that Justin Herbert and Joe Burrow were above league average as rookies–and Burrow for a team with a 4-11-1 record–presaged their breakout performances in 2021.

Second…do any of you subscribe to Hulu or Hulu + Live TV? We have been using the latter the entire time we have lived in Arizona, but in the last week the platform has really begun to act up. It has reached a point where most of the time the TV has to be unplugged for 15-20 seconds before Hulu will load correctly. Calls to Hulu “customer service” have proven to be useless.

Television is not an important part of my life, but when I want to sit down to clear my head and watch TV for 30-60 minutes I don’t want to have to experience such complications. By the way, Amazon Prime Video works without a glitch, but doesn’t have much programming that I want to watch.

I don’t really want to switch to the streaming TV service provided by the Evil Empire, AKA Guck Foogle, and many of the other services have very limited channel selections. We also don’t want to sign up for multiple streaming services. Does anyone have any suggestions? We have heard/read that Hulu and Samsung TVs, the brand we have, can have issues.

Not surprisingly, I took dozens if not hundreds of pictures during the four days of the recently concluded Mecum auction. I could easily show 25-30 photos per post for the next few posts, but don’t want to overwhelm my readers.

Another tangent…Dana Mecum was in the house although not for the entire four days. For many months he had been absent from the auctions that he started. One morning before the auction began my wonderful wife wanted a picture with him. We walked up to him and he graciously consented to the photo. When I said it was good to see him he replied, “It’s better to be seen than viewed.” 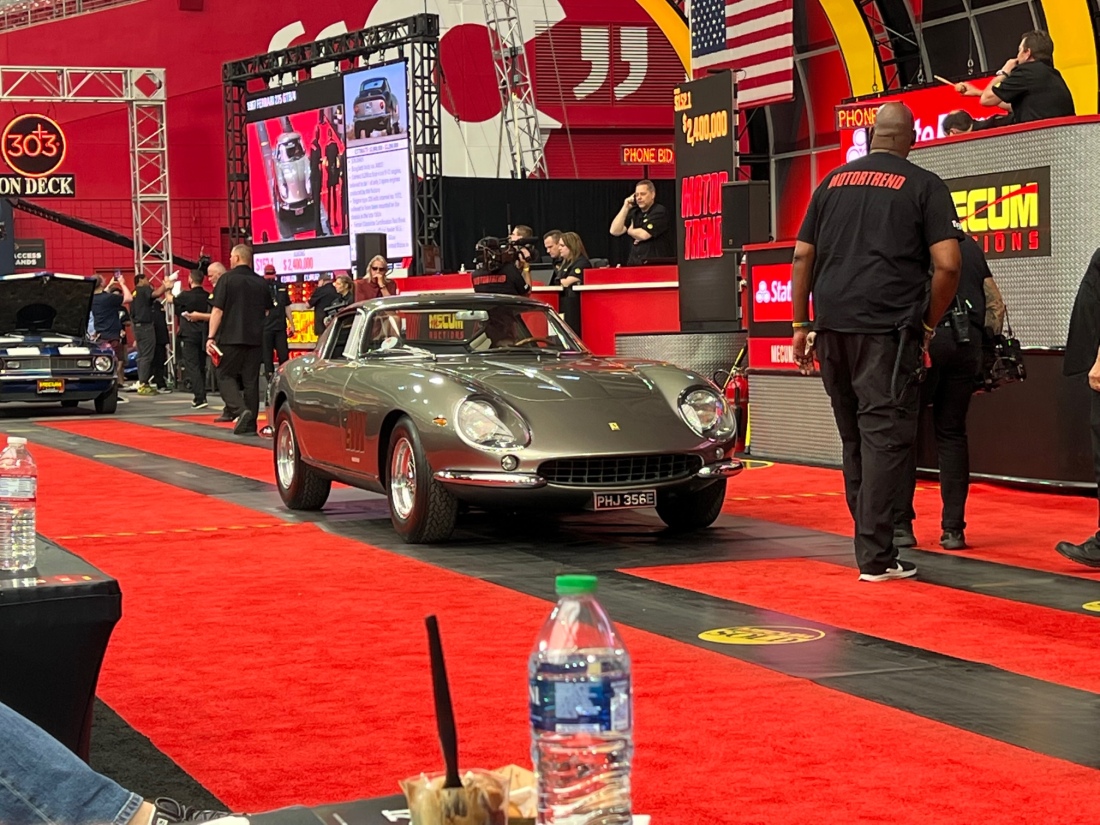 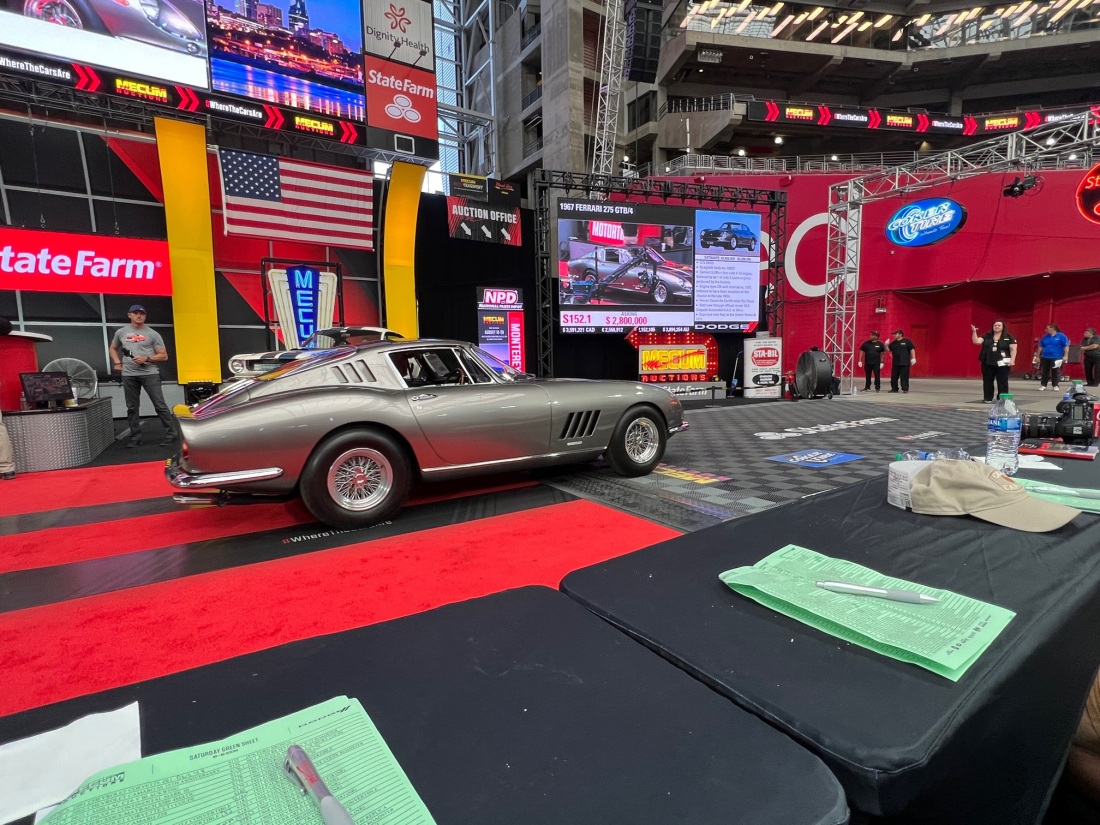 Yes, as is our custom we sat in the front row. Buying a Gold badge to a Mecum auction has its perks.

Once again, I was smitten with a 1930s Oldsmobile Business Coupe, in this case an L38 model. 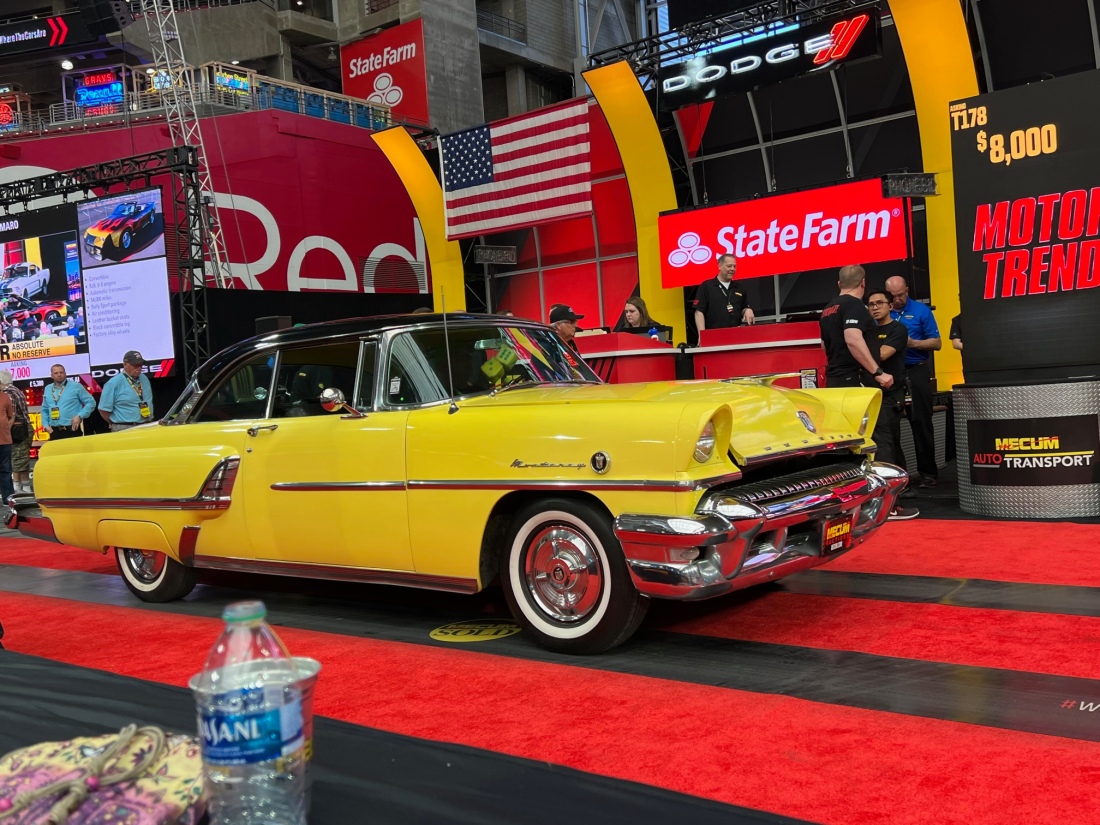 Despite the clunky continental kit at the rear–I think that these look bad 90% of the time–I really liked the looks of this 1955 Mercury Monterey. It hammered sold at $19,500 or $21,450 all in. The continental kit can always be removed.

I hope to show the “V Car” for the Cars A To Z series tomorrow. 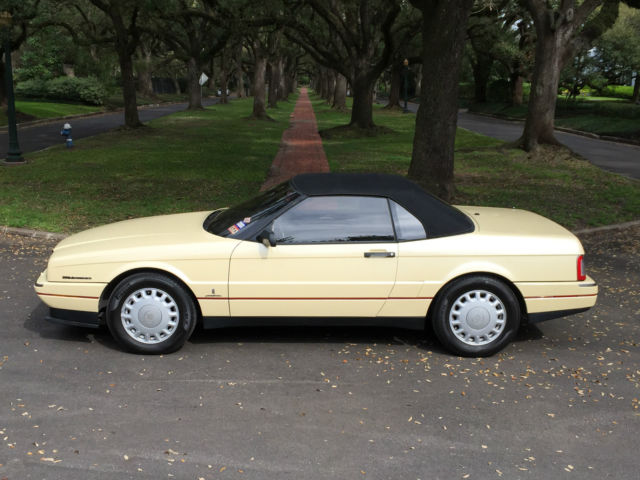