What you gonna do when everybody’s insane?”

That lyric from a “classic” rock tune from the 1970s seems appropriate today. Does anyone know what song it is? It is only very recently that I have realized how much I like it. No, its identity is not revealed here or here.

By this time in 1971, which was already the 1972 model year for automobiles, cars had begun to be de-tuned. Horsepower was given as a net and not gross figure, which exacerbated the perception that cars were becoming less powerful, although that perception was truth, unlike many other instances. Of course, emissions standards and the dictates of insurance companies were the drivers (no pun intended) for these changes.

For example, the most powerful big-block Corvette engine was rated at 425 HP for model year 1971. The next year, that figure dropped to 270 HP. Again, much of the difference was simply a change in the way horsepower was reported, but not all of it. 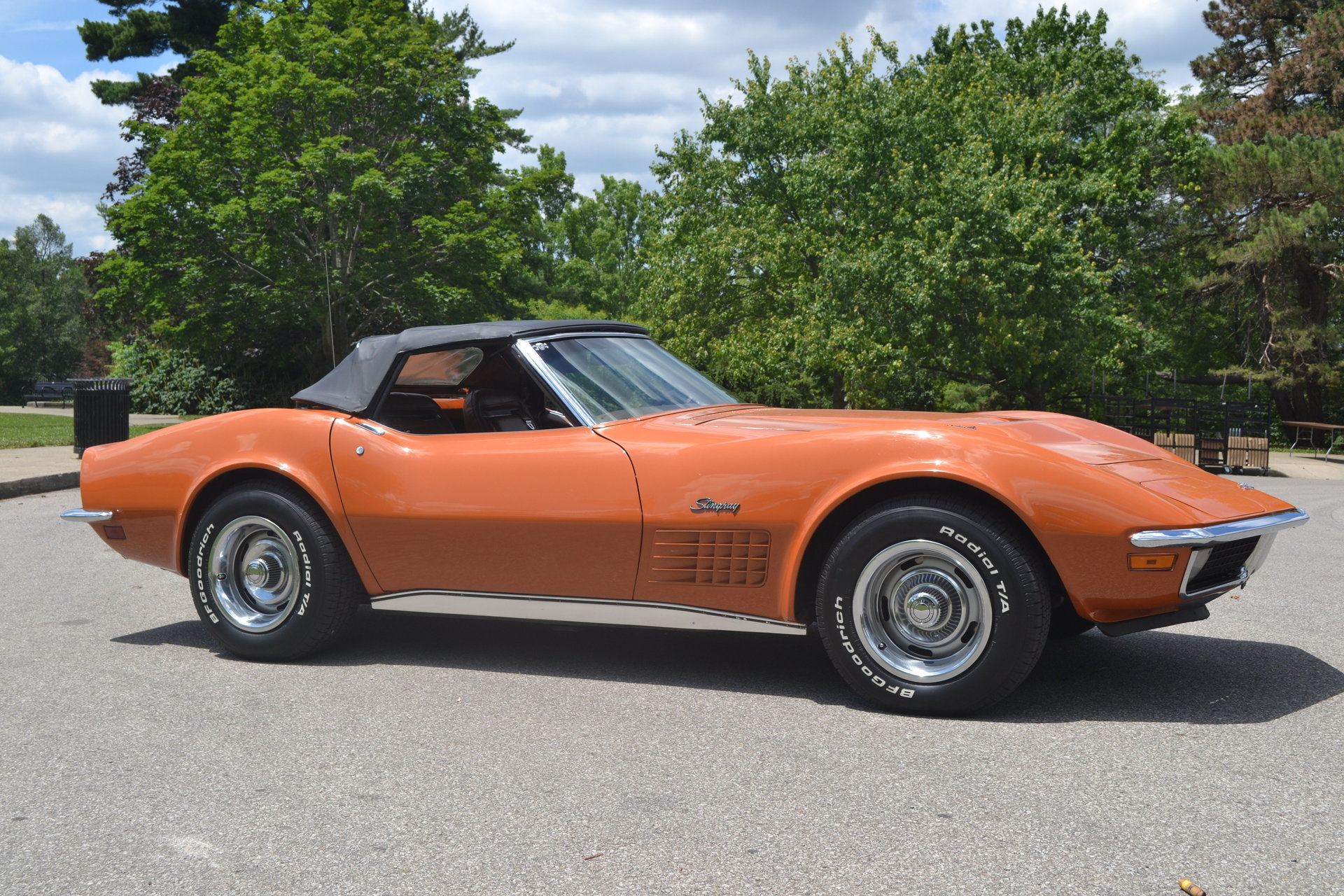 In 1981, the only engine available in the Corvette was rated at 190 HP/280 LB-FT of torque. That was the last year in which every Corvette sold was rated at under 200 HP. I doubt anyone could have foreseen a day when Corvettes would be available with 600+ HP off the showroom floor that also made much better gas mileage and had fewer emissions than their ancestors. For the nth time, history is replete with examples of the folly of human beings trying to predict the future.

This passage about 1970 from The Genuine Corvette Black Book has long intrigued me:

“An LS7 rated at 460 HP (or 465 HP) was planned and appeared in order guides. It was the big-block version of the LT1, including aluminum heads. A ZR2 package with the LS7 was also planned…The LS7 and ZR2 were cancelled and it is thought none were delivered to retail customers.”

The LS6 option in the 1970 Chevelle was a 454 cubic-inch engine rated at 450 HP, the highest “official” HP rating from any American manufacturer during the original muscle car era (1964-1971). Does anyone know anything else about the LS7? This brief piece discusses the engine, but doesn’t provide too much information.

These automotive “almosts” are very interesting to me. Once again, whatever actually happens is not the only thing that could have happened.

I was originally going to show another sunrise photo, but when I looked at it on my computer screen, the picture was just ruined by the screen and dirt on my office window.

The views of mountains look better in real life to me than the pictures I take. The views of color in the sky look amazing to me either way. So…

I must admit to a paucity of ideas for blog posts in recent days. Maybe it shows…

I thought skipping a day would recharge my mental battery, such as it is, but that has not been the case. Trying to analyze and unearth reasons for the lack of ideas is not worthwhile, in my opinion.

Obviously, I’m not writing this blog for the money. I really enjoy writing and, frankly, think I’m very good at it. I enjoy receiving thoughtful comments from regular readers and first-time commenters. Being consistent in creating content is important in building an audience.

If anyone reading wants to offer some ideas for a post or posts, I would like to read them. Thanks.

On this day in 1953 production of the Corvette began at its new “dedicated” facility in St. Louis. The 300 Corvettes produced for its first model year, 1953, were kind of cobbled together in a garage in Flint, Michigan. Chevrolet/General Motors, anticipating annual sales of about 10,000, had decided the Corvette needed a “real” production plant to meet the expected demand.

The best laid plans of mice and men…after producing only 700 Corvettes for model year 1955, Chevrolet/GM almost shelved the Vette. The introduction of the two-seat Ford Thunderbird in that model year and the growing influence of Zora Arkus-Duntov kept the car alive. Still, Corvette sales didn’t reach the 10,000 level until 1960.

The re-bodied C1 Vette for 1956 that included “modern” features like roll-up windows instead of window curtains and external door handles/locks was really the catalyst for saving the Vette, in my opinion. Automobile enthusiasts like to credit the introduction of the V-8, but the V-8 was available in 1955 and all but seven ’55s had it, but the car still sold only 700 units. I think that by the mid-1950s, the American car-buying public didn’t want to buy a car without modern windows and locks, period. For 1956, production approached 3,500 cars and then the introduction of fuel injection and a four-speed manual transmission for 1957 cemented the Vette as a performance car with broader appeal and sales topped 6,300.

The St. Louis facility produced Corvettes until 1981 when production was moved to its current venue in Bowling Green, Kentucky. The Bowling Green facility had been previously used by Chrysler, I believe, but for the manufacture of industrial HVAC systems and not cars. Chevrolet/GM wanted a more modern home for Corvette manufacture and Bowling Green wanted a tenant for the recently vacated plant. Some tax incentives later and, presto, a new home for the Corvette. Oh, if I have gotten any of that story wrong, please let me know. I’m relaying those details from memories of our tour of the Corvette Museum in August, 2019.

From Hemmings a picture of a Corvette that was built in St. Louis, a 1954 model: 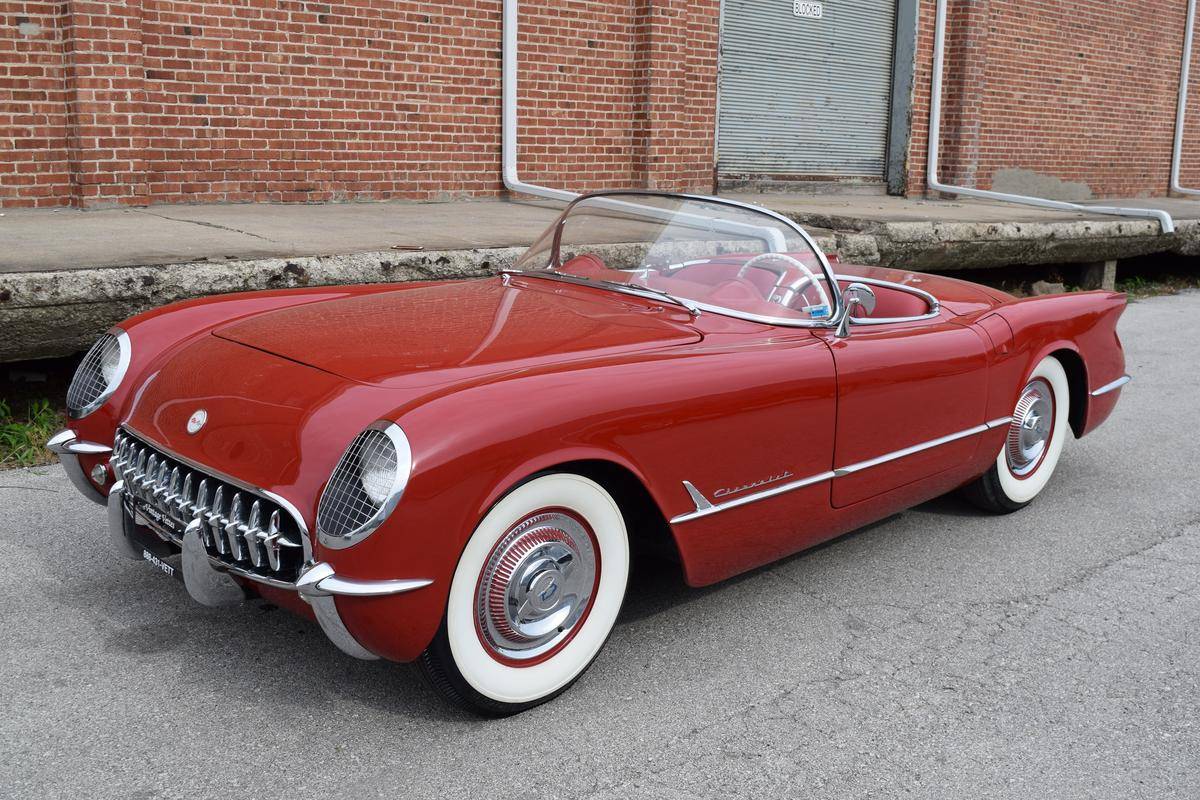 Nearly two million Corvettes later and the car is now a world-class performance automobile in its eighth generation. It didn’t have to turn out that way, though. What actually happens in the world is not the only thing that could have happened. Life is a Monte Carlo simulation.

It’s Wednesday and some people who know me think I’m a wackadoodle.

I am very proud of yesterday’s post. So much so that I sent the link via email to a few people who are not signed up as followers. I hope he doesn’t mind my sharing this, but one of those people was Michael Lewis. I asked him if he wouldn’t mind telling me his reaction to the post. What did he write? “Main reaction is it’s a pity you aren’t working in sports.”

In a reply to another friend to whom I sent the link I wrote this: EVERYONE thinks “it’s a pity” that I’m out of sports and yet, here I am. Of course in reality it’s not EVERYONE or I would have never left. It’s too bad so many people are arrogant ingrates. I’ll leave it to you to conjure up the names of the people to whom I am referring.

While I really have little interest in sports, and none in baseball, I still think it was a “miscarriage of justice” that someone with my skills and experience, someone who is a pioneer in analytics and pro scouting was simply tossed aside by the entire industry. Are you tired of reading my “whining?” Tough…I am on a campaign against those who think that everyone gets what they deserve and/or that everything is a matter of destiny.

I believe that life is a Monte Carlo simulation. I think that if it were somehow possible to run the same person’s life 100 times the same life would not occur all 100 times and that numerous different lives, maybe even as many as 100, would occur. That’s my story and I’m sticking to it.

In this post from July called Mega, I asked how many cars could a person buy if they won $154 million, which was the amount we would net after taxes if we had the only winning ticket for the next drawing. What would you do if you netted roughly a quarter of a billion dollars?

My taste in cars does not run to the ultra-expensive. Although I would like to be able to afford one, I really would not want a Koenigsegg and certainly not a Bugatti given its membership in the Group. I also would not want to own what is, essentially, a museum exhibit that cannot be driven. I often say to my wonderful wife about the clutter in our home that we live in a house, not a museum.

Everyone who reads Disaffected Musings on a regular basis knows about my affinity for C2 Corvettes and the De Tomaso Longchamp. If the roughly 1-in-300 million odds are overcome and we won the Mega Millions, what might I buy besides those two cars?

Without revealing Ultimate Garage 2.0, here is one car that might end up in my possession: 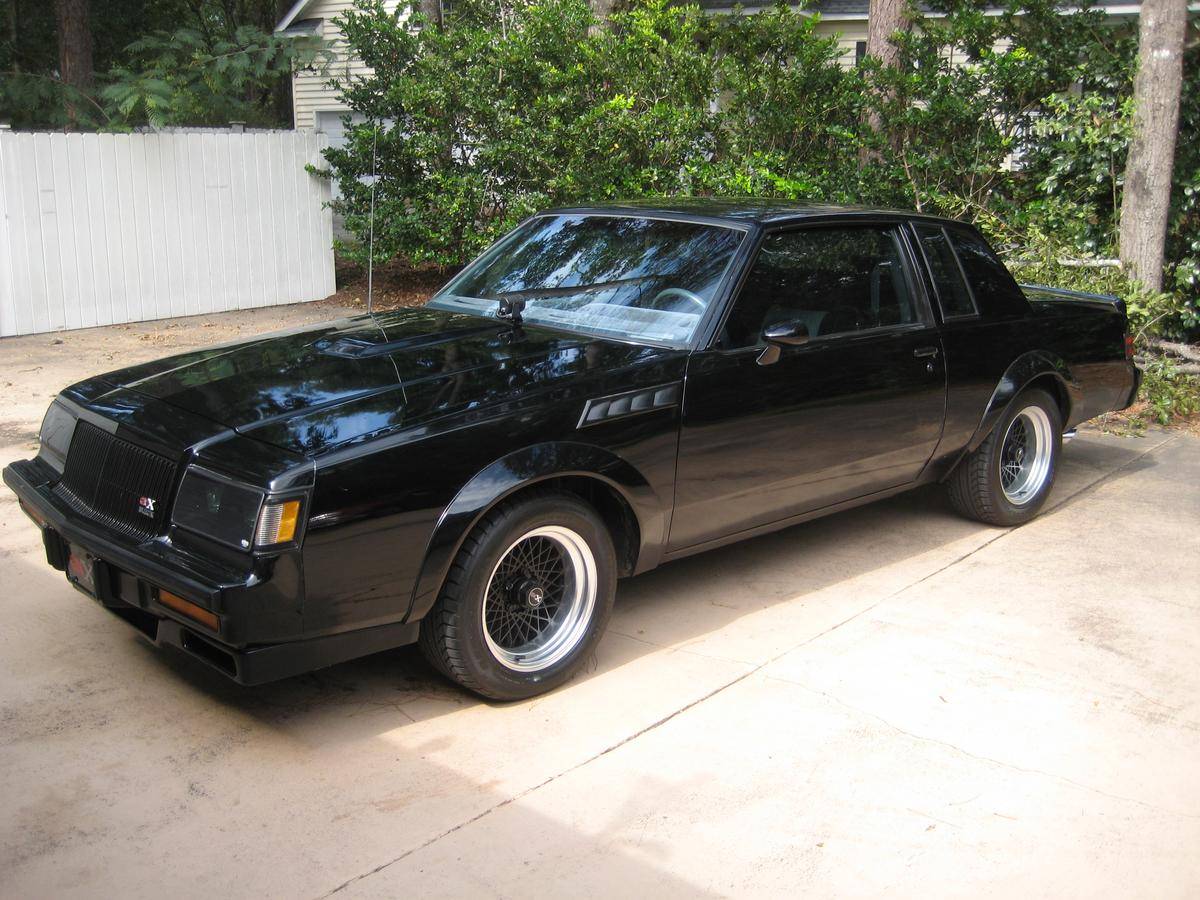 This is a photo from Hemmings of one of the 547 1987 Buick GNXs. Car and Driver just ran this story on the evolution of the car and maybe that’s why I am thinking about it.

I can bore you with the details of how the car evolved, of McLaren’s intimate involvement with the car, of how Buick almost certainly understated the output of the turbocharged 3.8 liter (231 cubic inches for Bill Stephens) V-6 engine. What I want to say is this: it was this car, a Buick, that was without a doubt the fastest production car sold in the US in 1987. It is this car that, in my opinion, SCREAMS to General Motors to let Buick have an improved version of the Solstice/Sky as a halo car. It is also my opinion that the styling of the GNX is still fresh more than 30 years later.

Given the rarity, the GNX is not a cheap car. Hemmings currently has two listed for sale with asking prices of $105,000 and $125,000. At the Mecum auction in Kissimmee in January of 2018 a GNX hammered for $90,000, which means the buyer actually paid $99,000 with commission. Still, for a car with its rarity and history the GNX is not really expensive, especially if you just won $257 million!

Good luck to all of the lottery players out there, but not too much. WE want to win it all!