The only political axiom to which I subscribe is that no matter where one thinks they stand on the political spectrum, much/most of the truth is usually somewhere else. That being said, I believe that anti-Semitism exists all along the spectrum. As I have written before, many perceive that David (the Jews) has turned into Goliath and no one roots for Goliath. Here are some stats to show how the perception of Jews as Goliath may have developed:

On the right (think the faction of the right, like the POS who shot up a Pittsburgh synagogue; pretty sure he’s not a Bernie Sanders supporter), I believe anti-Semitism’s roots stem from the narrow minded hate of people who are unlike them. That hate manifests itself in a belief that those unlike them who are successful must be evil because, to them, it’s just not possible that their success is a result of skill and work ethic.

I realize that I will not convince anyone to modify their views or even to re-examine their positions. I acknowledge that I do not possess a monopoly on truth or wisdom. No one else does, either. The political spectrum is two-dimensional, at most. The real world is three-dimensional, at least. Do the math.

Many times in the nearly 20 years we’ve been married I have asked my wonderful wife, “Why did you marry me?” I am only half-kidding when I ask. She is the kindest, cutest, sweetest and most wonderful person in the world. I am not close to being any of those things. I LOVE YOU, V Squared!!! 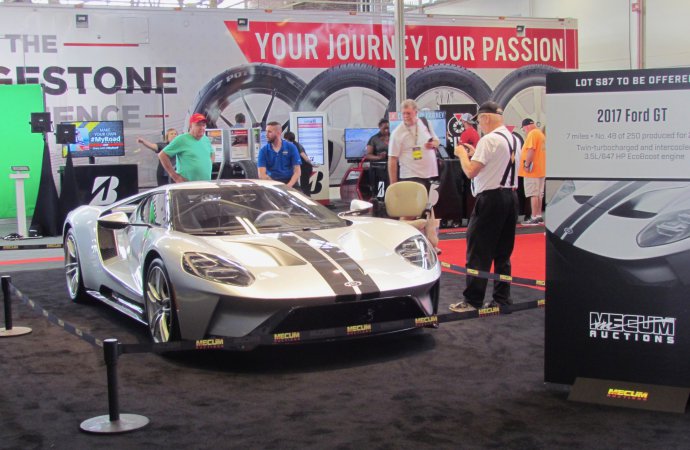 The picture comes from this ClassicCars.com article about Ford and Mecum Auctions reaching a deal on the consignment of the new Ford GT. Wrestler/actor John Cena sold his Ford GT, despite signing an agreement that he would not do so for a period of two years after purchase, for far more than he had paid for it. (Ford sued Cena and the two parties reached an agreement where Cena would pay Ford an undisclosed sum.) Subsequently, Mecum sold a Ford GT at its Indianapolis auction in 2018. The car hammered for $1.85 million. The Mecum car was not the Cena car nor was it consigned by the original owner.

Ford initiated court proceedings against Mecum and the two parties reached an agreement earlier this month regarding the Ford GT. As cited in the ClassicCars.com article, here are the three main terms of the agreement:

1.) Mecum will not accept for consignment sale any Ford GT owned by its original purchaser which is still subject to the two-year sales moratorium.

2.) Mecum will consult with Ford regarding any Ford GT consigned with Mecum by any downstream purchaser (i.e., not that GT’s original purchaser) for the first two years following the GT’s initial sale to the original purchaser, and will not permit the auction sale of that GT during that time without Ford’s consent.

3.) Mecum will make a charitable contribution to the Ford Motor Company Fund.

Mecum did not admit any wrongdoing.

What do you think? I am not an attorney, but I am fairly certain that all terms of a contract are not always enforceable even if the contract is executed willingly by parties that are competent and fully understand its terms. For example, I can’t legally agree to work for less than the minimum wage even if I am willing to do so. That provision is not enforceable. (Any attorneys who are reading this are free to comment and/or correct me if I’m wrong. Consider it pro bono work, if you must.)

An obvious conclusion for me is that Ford is not charging enough for the GT. I have a long-time friend who is a very gifted artist. When we first met in the mid-1980s she was struggling to make a living. During a conversation she said she might have to lower the prices of her work. I suggested that, instead, she raise the prices which would make her paintings appeal to a certain segment of the market. The strategy worked and about a year later she received a six-figure commission from a prominent local university to produce some paintings.

Companies are under no obligation to make their goods or services affordable for everybody. The Ford GT is more than a halo car and, as such, is supposed to be owned only by those of means. My wonderful wife and I are not poor, but we can’t afford one. However, we do not resent those who can.