I really couldn’t have chosen any other make for the “F” car than Ferrari. On a tangent…I have written about how much I like the show Salvage Hunters: Classic Cars that is shown on Motor Trend. The show is shot in the UK and hosted by Paul Cowland and Drew Pritchard.

Pritchard has almost a pathological dislike for Ferrari; at least that’s how his attitude is portrayed on the show. He thinks their styling is tasteless and the cars are unreliable. Cowland is a big fan of the make, or marque in UK parlance.

Almost all of us are at least part shadow and shade and ALL of us are flawed. That includes Enzo Ferrari. He was called “Enzo The Butcher” by race car drivers for his apparent disregard for their safety. According to The Beaulieu Encyclopedia Of The Automobile:

“Ferrari ran his factory as a Medieval city-state. He set his lieutenants against each other–Ferrari described himself as an ‘agitator’ of men…Ferrari always lagged behind in terms of technology. He was conspicuously late to adopt disc brakes, for example, a mid-engined layout or, even, scientific aerodynamics. Many a Formula One designer looked at Ferrari’s resources and could not believe why the Scuderia did not win every race it entered.”

Of course, his last-minute exit from a potential deal to sell his company to Ford led to Henry Ford II vowing to beat Ferrari at LeMans regardless of cost and effort. His personal life cost the company the services of key executives in the early 1960s. After the death of his son Alfredino “Dino” in 1956, Ferrari wanted to recognize the son born to his mistress. Not surprisingly, Ferrari’s wife objected, began to meddle in company affairs and that led to the departure of eight senior principals. Yes, that would almost certainly not happen today.

Still, as Beaulieu sums up, “Other makers have been more competent, but none can match Ferrari for sheer charisma.” As I do not wish to break a butterfly upon a wheel (thanks, Alexander Pope), I will just show pictures of some of my favorite Ferraris, of which there are many.

This is, of course, the 1961 Pininfarina 250 GT coupe with which I became smitten at the Mecum auction in Monterey, California in August of this year. Here’s another picture of the same car:

This is a Ferrari Portofino, which was part of my Ultimate Garage 2.0 published in 2019. I still love the car, but a person can change their mind even if there’s nothing wrong with the one they have.

This is the Ferrari California my wonderful wife test drove earlier this year, but was sold when we returned to the dealer. Of course, we really had no intention of buying the car right now. Hey, we just have no room at the inn. The California was part of my Ultimate Garage published on my first blog, which was hosted by the Evil Empire, AKA Google.

No, I haven’t written about Ferrari’s racing history or more about Enzo Ferrari. The cars speak volumes.

Have a great weekend; it is Friday, right?

I had intended to use the following as all or part of today’s post, but was “inspired” to write about a Solstice Drive, instead.

Yesterday, a much larger number of countries than usual generated blog views. Besides the US, of course, Disaffected Musings was read by people in nine other countries:

Australia (Yes, also a continent unto itself)

In all, views from outside the US comprised just under 15% of total views yesterday. For 2020 so far, views from the outside the US represent about 11% of the total. For 2019 that proportion was about 8%. As always, I am grateful for these views “from abroad.” I am also happy to see the magical Grand Duchy of Luxembourg represented and, might I add, not for the first time. From Wikipedia a map showing Luxembourg and its European neighbors: 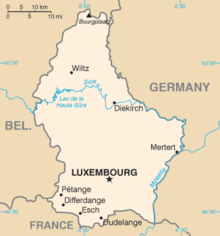 This is a picture I have shown here more than once, including in this very recent post. This is from the Grund section of the capital of Luxembourg, Luxembourg City. According to the CIA World Factbook (only available online now, it used to be available in a print edition), Luxembourg is one of only five countries in the world with a per capita GDP of more than $100,000. In the 2011 Mercer worldwide survey of 221 cities, Luxembourg City was ranked first for personal safety.

On this day in 2007 the Ferrari 60th anniversary global relay, that lasted almost five months and passed through more than 50 countries, ended at Ferrari headquarters in Maranello, Italy. Thousands of Ferrari owners and their cars participated in the relay, each carrying a baton with 60 badges representing important milestones in Ferrari history. From autoevolution a picture of a car that was introduced in 2007, the Ferrari 430 Scuderia:

It’s about 530 miles from Luxembourg City to Maranello; that would be a great drive in one of these.