My contempt for Facebook and for Zark Muckerberg is well-known to regular readers of Disaffected Musings. The company has a de facto monopoly on “social media” and along with the Evil Empire (aka Google) has a de facto duopoly on digital advertising.

Muckerberg has been quoted as saying, “You can be unethical and still be legal; that’s the way I live my life.” I just don’t understand why people share so much of their lives so willingly just so that Facebook can profit from your information.

Anyway…I didn’t save the link to the source of what I am about to share, but I’m sure almost anyone could find it quickly in an Internet search. This was the most compelling, to me, of the “66 Reasons To Hate Facebook.”

26. I didn’t like the idea that I was putting my life on display for the entire world.

Manipulation: I don’t like the power Facebook has over its users. It’s a simple matter of steering emotionally charged imagery and opinion towards people to manipulate how they think, act, and believe. I also see it as extremely polarizing; it’s very easy to get caught up in believing you and all these strangers know THE TRUTH, while the shadowy others that disagree with you are TERRIBLE HITLERS. You never talk to someone who disagrees with you, you simply preach to the choir and circle-jerk each other’s likes. I half-joke that I got rid of FB because I got tired of hating my friends and family.

Isolation: Social media gives the appearance of social interaction, while eliminating as much social interaction as possible. I found myself viewing friends’ pages, liking their pictures, but rarely actually visiting them or calling them up. At a certain point, lifelong friends were as real to me as celebrities or memes. That’s bizarre and horrifying.

Shady business practices: Even though I know that it was laid out to me in the contract, etc. I got more and more uncomfortable with the fact that my thoughts, communications, and images were legally owned by FB and whoever FB decided to sell them to. I didn’t like the idea that my life experiences were commodified, and I started thinking how weird it was that this is so normalized. Tell any mother to leave a box of her baby’s pictures on a park bench for anyone to take and she’d likely be horrified…but she’ll post every baby pic she ever takes on FB.

Balanced against the things I hate about FB, there’s…what, exactly? I tried to think about what I actually gained from FB and I came up short. Keeping in touch with people? Email, phones and meeting up did that better. Status signaling? I don’t think surrendering all privacy for a minor ego stroke was a good deal.

I do not have a Facebook account and never will. I think these comments are an excellent summation of all that is wrong with the “service” and why it should not be used.

I ask for your indulgence. I am probably going to be posting pictures of the scenery around here on a regular basis.

When my wonderful wife and I decided to move to Arizona one thing I insisted upon was a house with views. Well, we have views to spare. 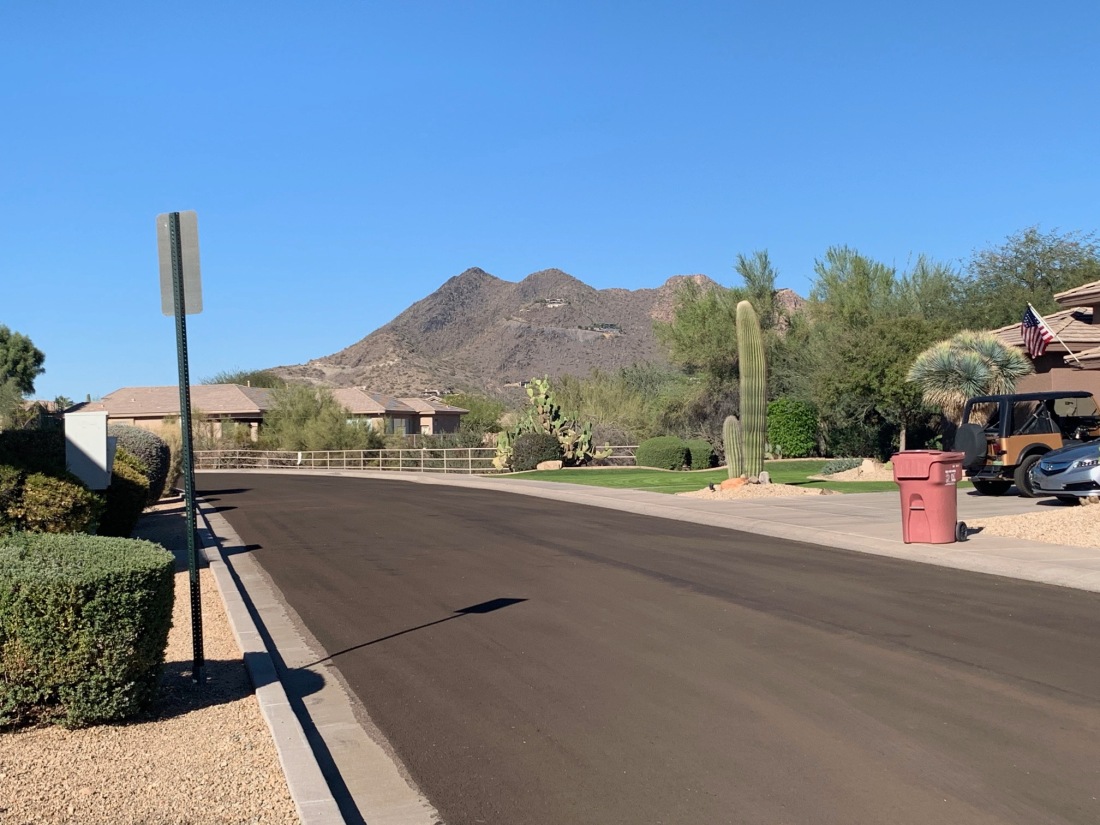 In our neighborhood, and I guess in much of this area, the mailboxes for a given street/development are in one place. This is the view walking to our “communal” mailbox, which can be seen in the left of the picture. Hey, I might have to check the mail 2-3 times a day.  🙂

A picture of one of my favorite cars from the car show we attended last weekend. 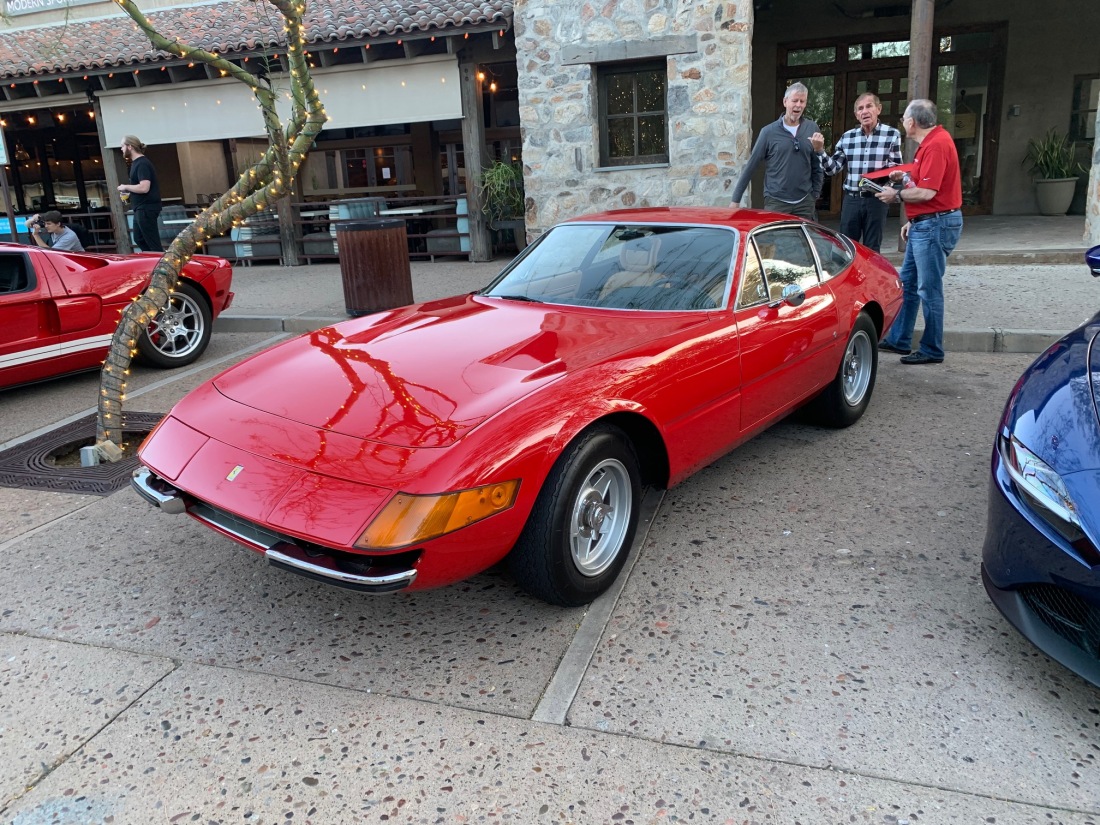 This is a Ferrari 365 GTB/4 better known as the Ferrari Daytona. That name, by the way, was never used by Ferrari but was bestowed upon the car after a 1-2-3 finish by the company in the 1967 24 Hours of Daytona race.

This car was among those that just missed the cut for my Ultimate Garage 2.0. As I wrote then and still feel now, I have not driven a car with a traditional manual transmission in more than 40 years and have no desire to re-acquaint myself with such an automobile. The Daytona was not available with an automatic and, frankly, a 1960s-1970s era automatic probably would have been a detriment to the car. Obviously, I would not retrofit a modern automatic to such a rare and valuable car. My net worth would have to be in ten figures-plus for me to do something like that.

I can say in all honesty that the only unpleasant people I’ve met in my many years as an automobile enthusiast are the manual transmission “snobs” who think everyone has to drive a car with a stick. Sorry, but I believe in different strokes for different folks. Besides, modern automatics are far superior to manual transmissions. No human being can shift as quickly or as optimally as an 8L90E. Besides, if you want to shift you can with the paddles.

Yes, my position on this debate has been enunciated here before. Even if I didn’t have arthritis in my left foot and left knee and a very painful bunion on the same foot, I would not want to drive a car with a stick. Different strokes for different folks (DSFDF)…

I am sad today as my wonderful wife is leaving town on a business trip. Each successive trip makes me more sad and I am especially worried because her drive today will be quite long. Be careful, V Squared! I LOVE YOU!!!

So far, one vote has been cast for 5-7 cars for (my) Ultimate Garage 2.0, one for 8-10 cars and one for how ever many my budget and criteria will generate. I don’t really have a budget because this is supposed to be an “Ultimate” Garage, but growing up in the lower middle class part of the socio-economic spectrum I don’t have an out-sized desire for expensive cars. Even though Frugal Friday wasn’t my idea, it fits me well.

Ultimate Garage 2.0, like the first one, will be idiosyncratic like I am. It won’t have any Mustangs or a 1970 LS6 Chevelle, but it might have a Studebaker Gran Turismo Hawk. Let me add that I don’t think I am a knee-jerk contrarian. I don’t think I automatically reject things that are popular or mainstream. I have known people like that and, as my armchair psychologist alter ego must postulate, I believe that many people who engage in such behavior are doing so because they think that will make them smarter than others or better than others. I think that they fail at those goals because being a knee-jerk contrarian is really no more profound or insightful than being a knee-jerk conformist. I strongly believe that almost any cognitive behavioral pattern constrained by rote is very seldom optimal.

OK, wake up! Maybe this will help:

From silodrome.com a picture of a Ferrari 365 GTB “Daytona.” I mean, Wow! Of course this was another Pininfarina-designed car. I mean, Wow!

I remember an episode of the “original” Top Gear where Richard Hammond and James May race each other along the Italian Riviera, Hammond in a Ferrari 365 GTB and May as a passenger in a speedboat. Although May “won” the race in terms of arriving at his destination first, Hammond really won because he so enjoyed the drive while May was abused by the rough ride of the speedboat.

One of the possible constraints for my Ultimate Garage 2.0 is my long period without having driven a vehicle with a manual transmission, 40+ years. I don’t know that if I really had the opportunity and the means to indulge my automotive fantasies whether I would acquire cars that would take some effort to learn to drive. Of course, if I exclude manuals then no Ferrari 365 GTB Daytona and no Honda S2000. On the other hand, if my Ultimate Garage ends up at 20 cars then it would really be just an exercise in excess.

I’m still hoping to read some of your Ultimate Garages! Please feel free to send them to me and to comment, in general.

Actually, I’m a weirdo every day of the week, but you don’t need me to tell you that. 🙂

Halloween? My parents had been in the US only about two years when I was born. I may have physically grown up in America, but culturally I was not raised here. My mother disapproved of Halloween. “You go around and beg for food,” she used to say with disdain. I think I only went trick or treating twice in my life. Of course, I didn’t need a costume as I looked scary enough on my own. I don’t consider Halloween to be anything except an excuse to eat candy; it does not remotely approach holiday status for me.

I have owned two Corvettes and my next car will almost certainly be a custom restomod C2 Corvette that I will buy and/or build. I love high performance cars with what I consider to be great styling, like this car:

From extravaganzi.com a picture of a Ferrari 365 GTB/4 “Daytona.”

So why do I love a car like this? See, I told you I was a weirdo. 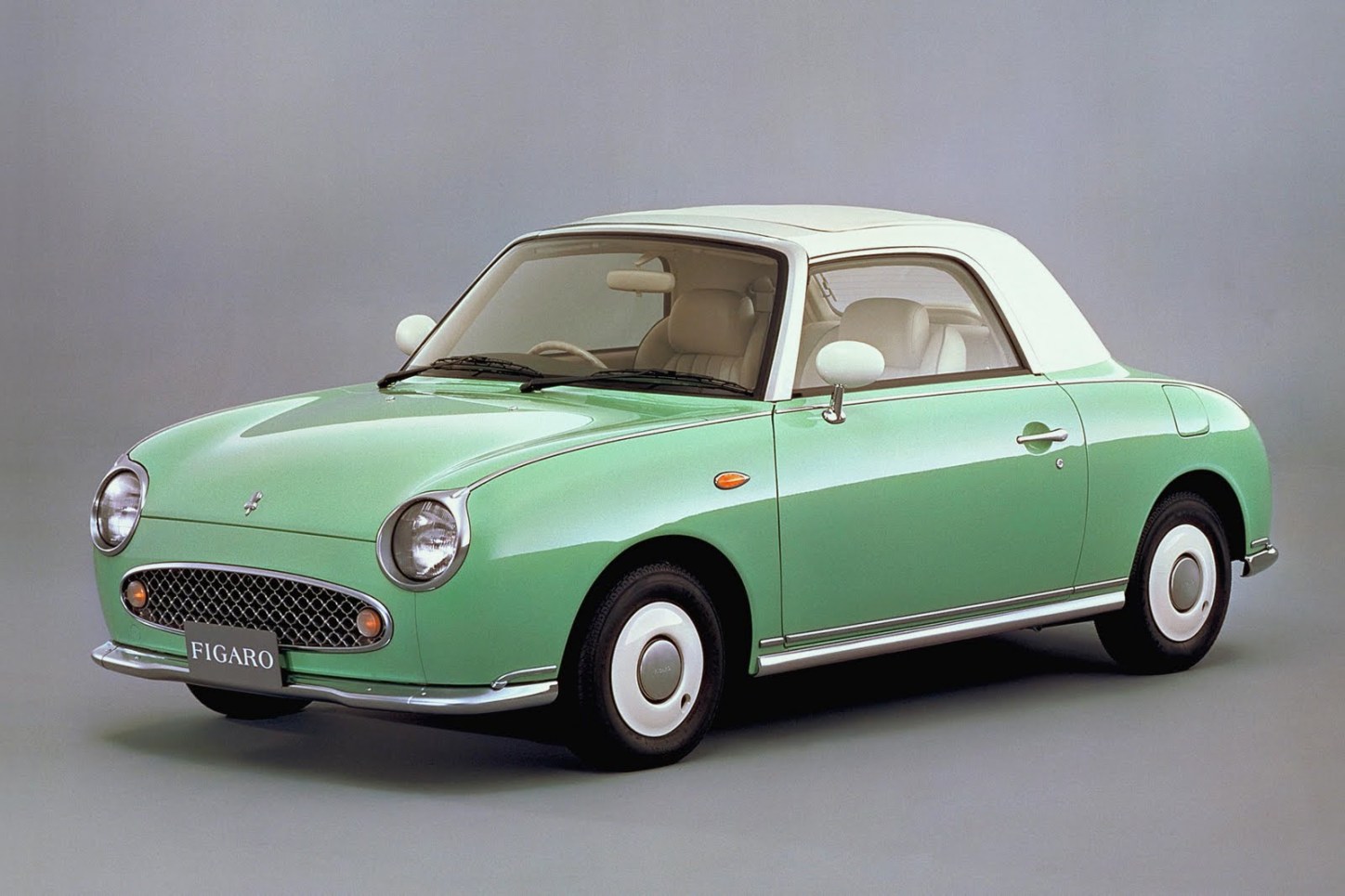 From pistonheads.com a picture of a Nissan Figaro. The Figaro was produced only for the 1991 model year. Originally only 8,000 were going to be made, but the demand was so high that Nissan ended up producing 20,000 of them.

They were powered by a turbocharged 987cc (everybody chime in, 60 cubic inches for Bill Stephens) inline 4-cylinder engine that produced 76 HP/78 LB-FT of torque. The Figaro had a three-speed automatic transmission.

I have a couple of pictures of me sitting in a Figaro at a local auto gathering, but didn’t want to show any of them here. I have shown a picture of me on this blog, but I was with three other people so it isn’t clear which of those people is me. In the Figaro photos I am the only person in the picture. See, I told you I was a weirdo.

Do I have to say it? The Nissan Figaro is adorable. Since all of the cars are now more than 25 years old they can be legally imported into the US. What do you think of the Figaro?

Thanks to everyone from the Corvette Forum who read yesterday’s post making it one of the most read posts on Disaffected Musings. If you like this blog, please tell your friends and please share the blog URL (https://disaffectedmusings.com).

Thanks to everyone who read this blog this month. October has had more views, unique visitors, likes and comments than August and September combined. I am grateful; please keep reading and please feel free to post thoughtful comments.

Here are the most read posts on Disaffected Musings not counting, of course, the home page:

Thanks to 56packardman for posting links to this blog, when relevant, on other car forums.

Thanks to an interesting email dialogue with Steve Dallas I am re-considering the engine choice for my restomod C2 Corvette build. He pointed out that in the real world titanium connecting rods and intake valves (stock on the LS7 engine) are really not a difference maker and that a crate LS3 can be purchased that makes more HP out of the box than the LS7.

I am not an unintelligent person, but I know that I don’t know everything about anything. As the title of a book by the late, great Hall of Fame manager Earl Weaver said, “It’s What You Learn After You Know It All That Counts.” I think that many people who suffer from delusions of grandeur and delusions of omniscience are really among the most ignorant. The more one learns the more one should realize how much they don’t know.