One of the local Corvette clubs, of which there are many in the Phoenix area, held its monthly show today. Unlike Corvette clubs in the east, this show was for Corvettes only. My wonderful wife wanted to see this event so she didn’t have to twist my arm, obviously. Hope you enjoy the photos. 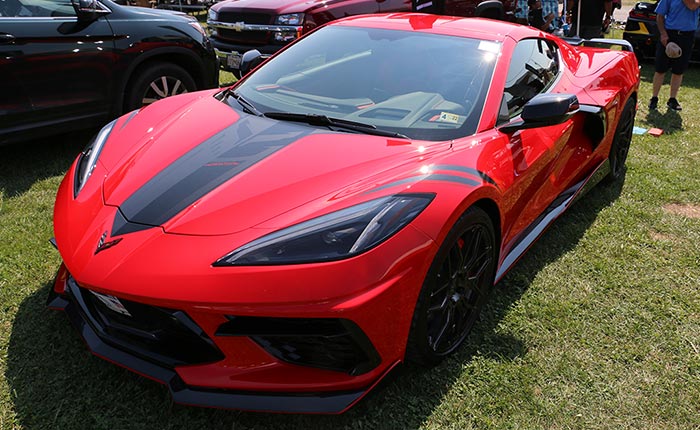 From this piece by Corvette Blogger is the news that Chevrolet has announced a final production amount for 2021 Corvettes: 26,216. That figure is about 29% higher than the number for the truncated 2020 model year. As best as I can figure, 2021 production will bring the total number of Corvettes produced to 1,788,799 since its beginning in 1953.

Apparently, 2022 model year production will begin on Wednesday, September 8th. Although David Banner (not his real name) may be buying an Italian car in the near future, I think he really wants one of these.

My stance hasn’t changed: I don’t think I will buy a C8 or any other Corvette, for that matter. I love the looks of the front half of the C8, but not the rear and especially not the rear three-quarter views. Also, remember the hashtag, #somanycarsjustonelife.

In the opening for the show Hand Built Hot Rods, Pure Vision owner Steve Strope says something like, “There are people who only like muscle cars, and then there are those [narrowing his hands] who only like Chevrolets, and then there are those [narrowing his hands more] who only like Camaros. Well, I don’t frickin’ think that way.” For me, I think three Corvettes is enough. If I am ever in a position to buy another car–not counting a potential replacement for our damaged Cadillac ATS–I will buy something completely different. Variety is the spice of life. I just want to avoid heartburn.

While I almost certainly will not buy a C8, Andy Reid of Classic Cars thinks it’s the best sports car in the world and not just “dollar for dollar.” The piece is titled, “Why spend more when you can buy the best, the C8 Corvette.” Here is an interesting excerpt:

“Quite simply, the C8 Corvette has democratized the world of super high-performance sports cars. It is not the underdog. Instead, it is many cases the top dog.”

The fact that two-thirds of C8 buyers have never previously owned any Chevrolet speaks to its broad appeal. If a few sticks in the mud–OK, let’s call them “purists”–don’t want to buy a mid-engine Corvette, so be it. Remember, though, that Corvette Chief Engineer Tadge Juechter recently remarked that Chevrolet could have sold three times as many C8 Corvettes as it has produced. Taking him literally would put 2020-21 Corvette sales at about 140,000, or about 70,000 per year. Corvette sales have only exceeded 50,000 twice in its long history.

From the Classic Cars piece:

Maybe it’s just my bias, but it seems as though most published photos of C8 Corvettes show a side view or a front three-quarter view and not a rear view.

I will lament the end of Internal Combustion Engines in the Corvette, but that development is inevitable. Enjoy ICE Corvettes while you can. While I will probably never buy another Vette, I will also probably never get rid of my 2016 Z06.