Except for the instrumental intro to “California Girls” I am not a huge fan of the Beach Boys. Therefore, today’s post title must not be about the group.

I have written about my class in my senior year of high school here, among other places. I have also written about the outstanding nature of the curriculum from which I graduated here.

Well, my high school has reached a different level. John Clauser, one of three recipients of the recently announced Nobel Prize in Physics, graduated from my high school. What school is it? The Baltimore Polytechnic Institute, colloquially known as Poly.

I barely understand the research and subject matter for which these people were awarded the Nobel Prize. According to the Wikipedia article about Clauser–which makes no mention of Poly, shame on Wikipedia–the prize was awarded for “experiments with entangled photons, establishing the violation of Bell inequalities and pioneering quantum information science.”

Thanks to David Banner (not his real name) and Dr. Hoss–both are Poly alums like I am–for sharing the news with me. I don’t know if the school still has the same standards of excellence as it did when we attended. Sadly, Poly is not immune from the epidemic of American violence. As recently as 2018, a teacher was assaulted by a student because she contacted that student’s parent after he skipped detention to which he was assigned. That would have been unthinkable when we were there, although on one occasion a teacher was hit in the face with a pie as part of a prank. The pie-thrower was severely punished, but the masterminds were never unearthed. No, I was not among them nor did it happen to any of my teachers.

Hail to John Clauser and to Poly.

This piece from Classic Cars brought a smile to my face. It is about the re-introduction of the Maserati Gran Turismo. Regular readers know of my affinity for the Trident, which I have had since elementary school and this rendering in The Golden Guide To Sports Cars.

From the Classic Cars post, here is a photo of the new Gran Turismo, which doesn’t look much different than the iteration produced from 2007 to 2019. The first of these will be designated as 2024 model year cars. 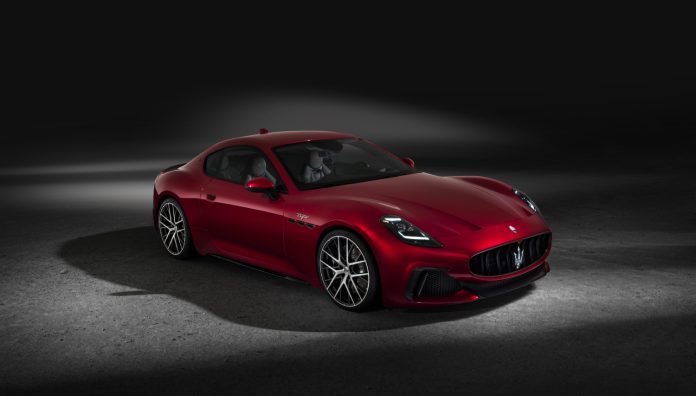 As I believe all automobile manufacturers should, Maserati is offering this car with an Internal Combustion Engine OR an electric drivetrain. How long this will last is anyone’s guess.

The new ICE is, of course, a twin-turbo V6; basically, it’s the same engine used to power the MC20, another favorite of mine. In the Gran Turismo the engine is detuned, but still produces 490 HP in the base Modena version or 550 HP in the more “upscale” Trofeo spec (shown above). So, how much? According to Classic Cars, the base Modena will start at about $200,000.

The MC20 is more expensive, but our local Maserati dealer sold its entire 2022 model year allotment of eight cars in less than a week. Around here, anyway, cars in this price range sell quickly. I suspect for people playing in this arena, $200,000 is not a lot to spend to get a car with this pedigree.

As you may remember, my wonderful wife and I test drove a Gran Turismo (a 2014 model?) and were very impressed. It was, however, more than we wanted to spend for what would have been a third car. In addition, it probably would not have fit in our garage. Someday, though, I may seriously try to acquire a Maserati.