Once again I want to express my gratitude to all of those who visited Disaffected Musings yesterday and generated yet another daily record for views and visitors. I especially want to thank all of the readers from Hemmings, Car and Driver and Corvette Forum. Unless the new record is a completely incongruous one I probably won’t mention this again.

I hear the theme music for the James Bond movies in my head. Hmm…

From pistonheads.com a picture of the iconic Aston Martin DB5. Of course the “DB” in Aston Martin cars are the initials of David Brown who owned and ran Aston Martin from 1947 to 1977. Brown, who was managing his grandfather’s successful gear and machine tool business, saw an ad in a newspaper that a “High Class Motor Business” was for sale. Having a long-time interest in cars Brown investigated and discovered that the company was Aston Martin. After a few months of negotiations the sale was completed in early 1947.

I believe Brown remained active in the company until the British government nationalized the warship building division in 1977. He was so disgusted that he moved to Monaco and lived there for the rest of his life. He sold his shares in the David Brown Corporation in 1990. Wealth has always been mobile and is even more so in the 21st century. When governments become hostile to wealthy people, those people will “vote” with their feet. Resentment and envy of people who are wealthier than you is not a sound basis for public policy.

Of course the DB5 is probably the most famous car from the James Bond movies. The first movie in which it appeared was Goldfinger, which was released in 1964. I was surprised to learn that only about 1,000 DB5s were produced and that the production run was short, only about two years (1963-1965). It should not come as a surprise that the body was designed by an Italian coachbuilder, Carrozzeria Touring Superleggera.

The DB5 was powered by a double overhead cam inline six-cylinder engine of 4-liter displacement (244 cubic inches) that was rated at 282 HP/280 LB-FT. The standard transmission was a ZF 5-speed manual, but the DB5 was also available with a 3-speed automatic by Borg-Warner.

My wonderful wife’s father is a big fan of the James Bond movies. Absolutely no disrespect intended, but I have never been a fan of the terms father-in-law or mother-in-law so I don’t use them.

One reason I posted about the DB5 today was this recent article on CNBC. In it the CEO of Aston Martin, Andy Palmer, stated his beliefs that auto engineers, and not politicians, should be allowed to fix the auto pollution problem and that the traditional gasoline engine will be around for a long time. Of course he also mentioned that Aston Martin was developing electric/hybrid drive systems and would be introducing two models driven by such systems within the next three years.

How much will the electric/hybrid Aston Martins resemble this modern DB? 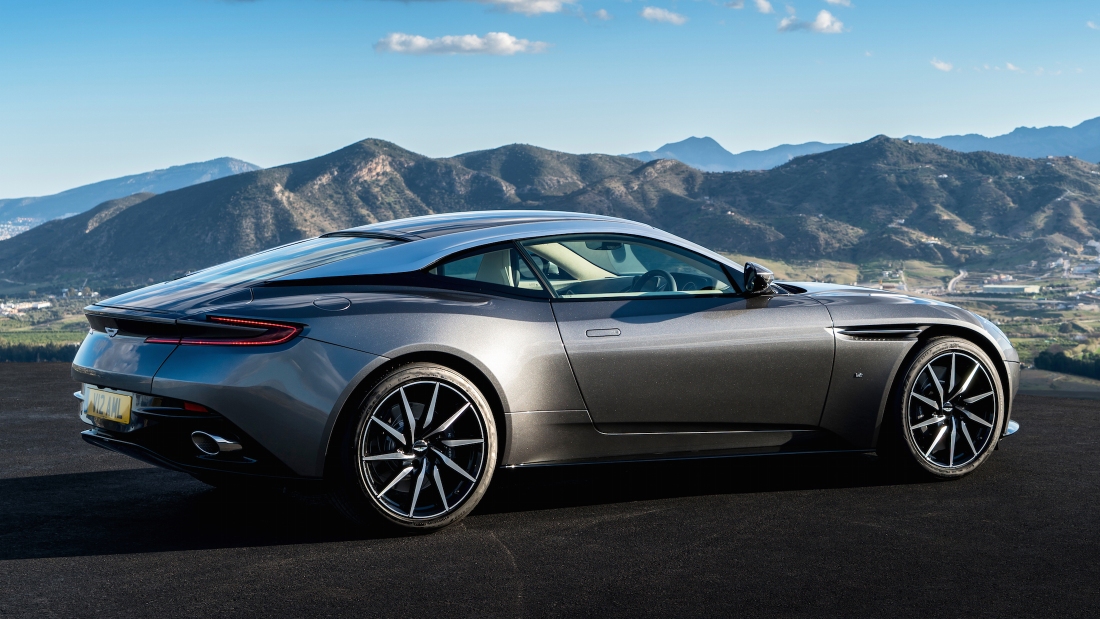 From WordPress blog a picture of a DB11. My wonderful wife’s Ultimate Garage (I haven’t forgotten about that concept) would definitely contain at least one Aston Martin.

The company suffered a great deal as a result of the major economic slowdown that began in 2008. In that year total company sales exceeded 5,000 cars and didn’t reach that level again until 2017. Much talk among those with an interest in the automobile industry centers around whether or not Aston Martin can remain independent and survive. European sales have not recovered to pre-crisis levels as Aston Martin sold about 4,000 cars in Europe in 2007 and even with a healthy rebound in 2017 that figure was just 2,500.

I think it would be a shame if Aston Martin were to disappear. The company, bolstered by the rebound of 2017 I suppose, became publicly traded just last month (October, 2018). According to this BBC article about the IPO Aston Martin “has gone bust seven times in 105 years.” That history casts a long shadow over the future of the company, unfortunately.

Once again, thanks to all of those who read Disaffected Musings yesterday generating another daily record for views and visitors. Do you think I should keep reporting these or only in the case of a really exceptional number?

I am REALLY obsessed with my restomod C2 Corvette build. Last night I had a dream that my father, who has been dead for 25+ years, negotiated an unbelievably low price for the project, a mere fraction of what I have been told such a build will likely cost. When I told my wonderful wife (in the dream) she said, “OK, I’ll build one, too!” 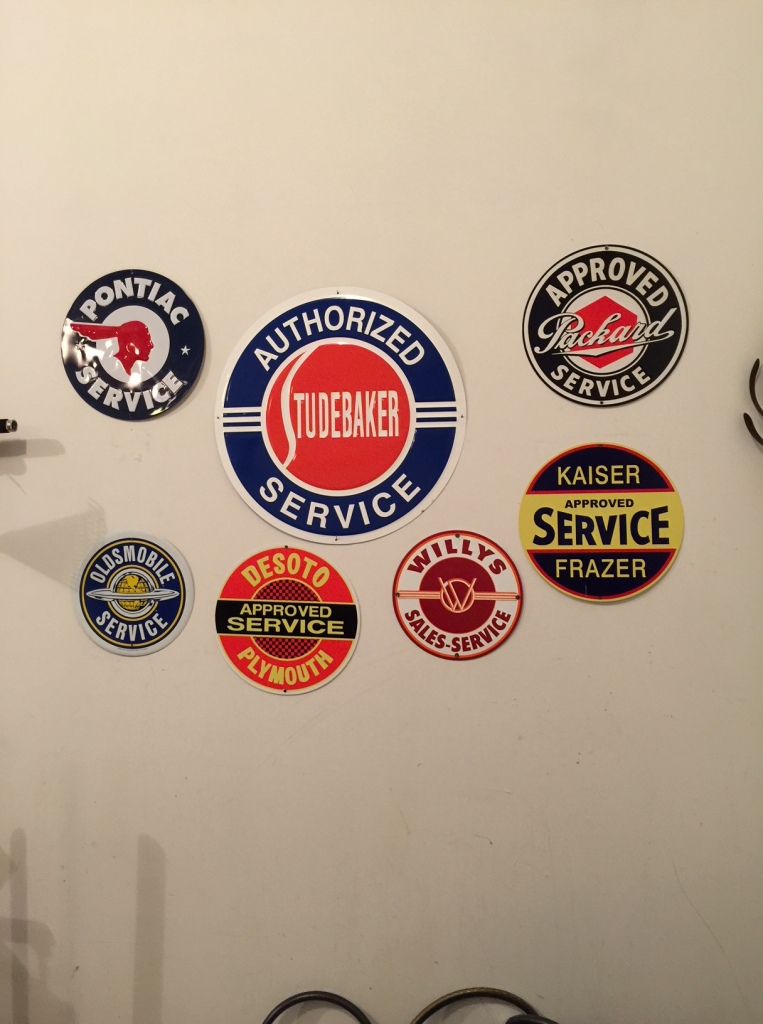 I have discussed my obsession with DeSoto, but have not discussed Plymouth very much. Both makes were introduced in the summer of 1928 by Chrysler Corporation as 1929 model year cars. Obviously, both cars survived the Great Depression.

Many car enthusiasts are familiar with this Plymouth model:

From hotrod.com a picture of a 1968 Plymouth Road Runner. 1968 was the first year the model was offered. It was supposed to fill a niche for a muscle car that wasn’t too expensive. The lowest base price for a 1968 Road Runner, which was for the non-hardtop two-door coupe, was about $2,900. The base engine for the Road Runner was the Mopar 383 cubic-inch V-8 with a four-barrel carburetor rated at 335 HP/425 LB-FT of torque. Of course, the car featured cartoon emblems of the Road Runner as well as the “Beep Beep” horns.

This car, which was actually introduced in 1967, was also from Plymouth and was known as the Gentleman’s Muscle Car:

From moparblog.com a picture of a 1967 Plymouth GTX. I believe this is the only year the GTX had this look as for 1968 the entire Plymouth Belvedere line was restyled. The base engine for the GTX was the 440 cubic-inch V-8 with a four-barrel carburetor rated at 375 HP/480 LB-FT of torque. So that the comparison is apples to apples, the lowest base price for a 1968 GTX was about $3,300 or about $400 more than a Road Runner.

Both cars were victims of the demise of muscle cars due to emissions/safety standards as well as insurance companies not wanting to write policies for 17-year olds driving high-performance cars that, let’s face it, were really only high-performance in a straight line. The last year of the GTX was 1971 while, technically, a car called the Road Runner was offered until 1980 although in emasculated form after 1971. (A mild tangent: more on Mopar is this article about a rare car.)

In yet another example of the folly of human beings trying to predict the future, high-performance cars weren’t gone forever after 1971 as almost everyone predicted at the time. I think that each member of Detroit’s Big Three currently offers a car with at least 700 HP and these cars are comfortable, handle and brake well and are reliable. While most seem to think the days of the internal combustion engine are numbered, who really knows what the future holds?