First, 1987 was one of the most important years in my life. On December 23rd of that year, my hometown Baltimore Orioles offered me a full-time job in Baseball Operations. I recounted the story in greater detail here, so you can read that post if you want to know more.

As it pertains to the US automobile industry, 1987 could be said to have been the year of three letters, as in AMC and GNX. American Motors Corporation (AMC), the last of the US independent automakers, ceased to be independent as on March 9, 1987 Chrysler Corporation agreed to buy out Renault’s stake in AMC (either 46% or 49%) in addition to all other outstanding shares for $1.5 billion. The takeover was finalized in August. Chrysler and AMC had entered into an agreement in 1985 where the latter would build rear wheel drive “large” cars for Chrysler through at least 1990.

“Chrysler’s acquisition of AMC was one of the all-time great moments in corporate serendipity that most definitely played a key role in demonstrating how to accomplish change.”

Lee Iacocca, Chrysler chairman, retained some AMC units, such as engineering, completely intact. AMC’s lead engineer, Francois Castaing, was made the head of Chrysler’s engineering. Under Castaing, Chrysler developed an all-new line of cars and trucks that led the company to real success in the 1990s. One of his projects that came to fruition was the Dodge Viper. An aside: my wonderful wife and I met Mr. Castaing while we were having breakfast in Scottsdale, Arizona in May of this year. He was with Marty Nelson, whose agricultural products company has made him wealthy enough to be a large buyer and consignor of cars at many Mecum auctions.

The last vehicles produced by AMC before the takeover were the Renault-derived Alliance and the Eagle. Chrysler continued to use the name Eagle as a separate make through the 1998 model year. Below is a picture of a 1987 AMC Eagle sedan, of which only 751 were produced. 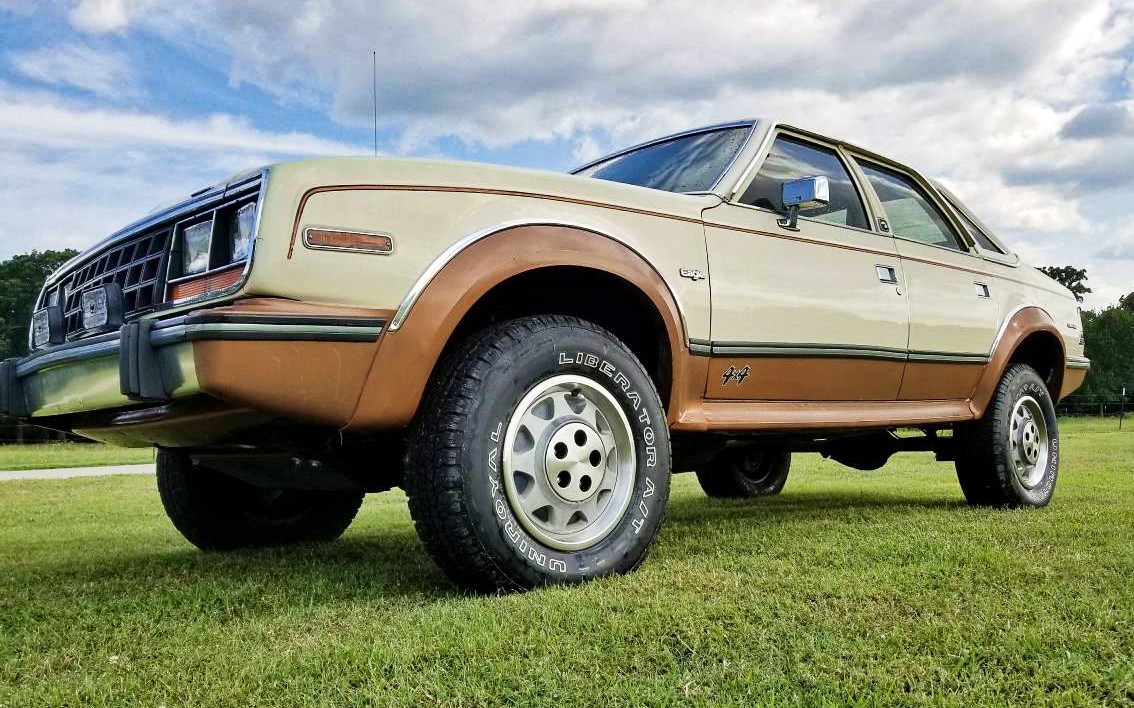 Of course, the Buick GNX has reached legendary status among US automobiles. 1987 was the last model year for the GM G-Body rear-wheel drive cars. Production of the Grand National–the GNX was a variant of that model, of course–was not halted until December, 1987. Buick manufactured 20,193 Grand Nationals, but just 547 GNXs. Without further ado: 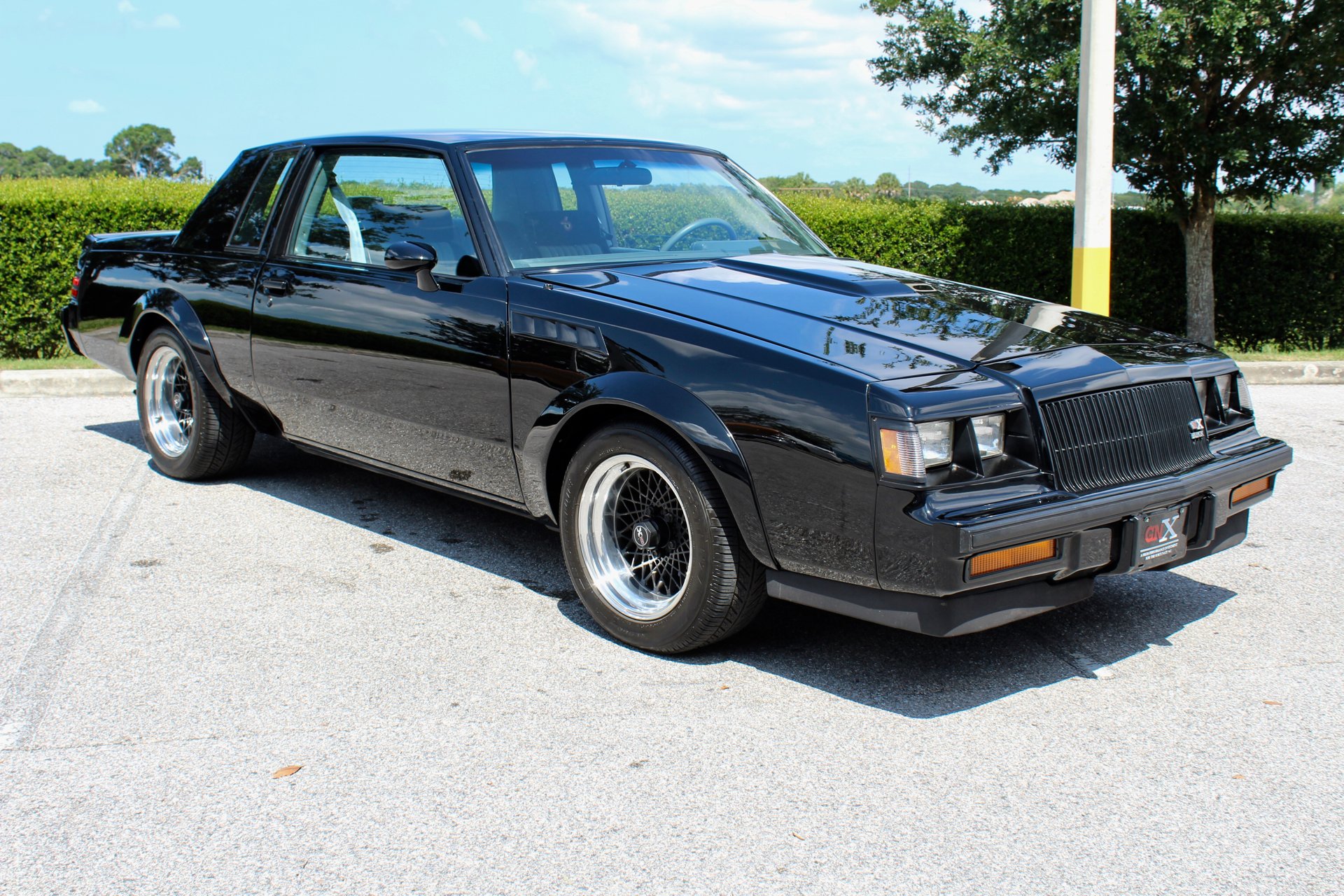 This one is supposedly number 186 of the 547 GNXs produced. This was the fastest car produced in the US in 1987, even faster than the Corvette. It can be hard to get one’s head around that fact, especially since Buick doesn’t even manufacture cars, anymore, only SUVs. The GNX could accelerate from 0-60 MPH in 5.4 seconds (that was Buick’s “official” time, I have also seen that time reported as 4.7 seconds) and do mid-13s in the standing quarter-mile. A 1987 Corvette could do 0-60 in 5.9 seconds with mid-14s in the standing quarter. The GNX was faster, 0-60, than a Ferrari 328.

ASC/McLaren actually built much of the GNX for Buick. The car’s turbocharged 231 cubic-inch V-6 was rated at 276 HP/360 LB-FT of torque. The standard turbo for the Regal line was rated 245 HP/355 LB-FT. Many car enthusiasts think Buick understated the engine output as well as the 0-60 time and that real output was closer to 300 HP/420 LB-FT. You will be seeing the GNX/Grand National featured in a Hall of Very Good Cars post.

Another one of my favorites, a different model year of which appeared in my Ultimate Garage 3.0 last July (!), debuted in 1987: the Cadillac Allante. Below is (hopefully) a picture of an ’87 Allante as I think they look best, with the auxiliary hardtop in place: 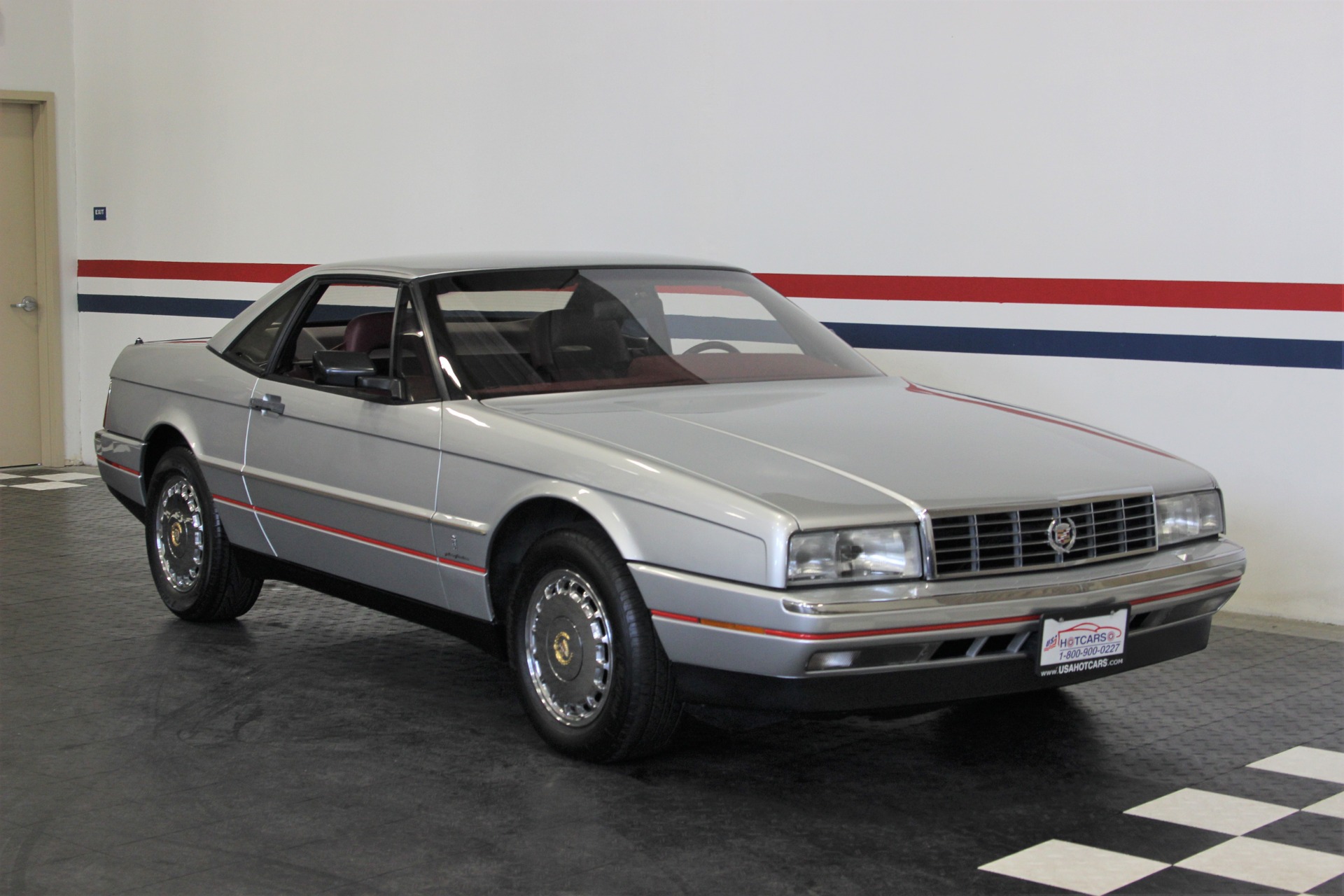 Of course, the Allante was a failure for Cadillac and General Motors as only about 21,400 were built during seven model years of production through 1993.

1987 model-year US production declined 6.5 percent from 1986 to 7.4 million cars. Chevrolet and Ford were the only two makes to reach the one-million level: Chevy at 1.38 million and Ford at 1.18 million. What was the best-selling Chevrolet model in 1987? Do you remember the Celebrity?

Ford earned $4.6 billion in profits in 1987, at the time the highest nominal (not adjusted for inflation) profit for any US automaker. No one could have foreseen that about two decades later Ford would record a $12.7 billion loss. Of course, it was the only Big Three automaker not to file for bankruptcy during the Great Recession of 2008-09.

Well, just two Threes And Sevens posts remaining, 1993 and 1997. I hope you have enjoyed this series.

OK, so maybe this story is not important, but it’s my blog and I am going to tell it, anyway. For some unknown reason, a few days ago I thought about an episode of Crossing Jordan. My wonderful wife and I used to watch the show when it aired on NBC from 2001 to 2007. The show starred Jill Hennessy as Dr. Jordan Cavanaugh, a crime-solving forensic pathologist employed in the Massachusetts Office of the Chief Medical Examiner.

The specific episode was about a despicable attorney, played by the late Ron Silver, who had an extremely antagonistic relationship with everyone in the ME office. He was brought in, apparently killed by a gunshot. However, he wasn’t dead, but paralyzed from eating improperly prepared Fugu, a fish.

During the episode flashbacks were shown to explain how the relationship between Silver’s character and the staff had evolved. Eventually, the team figures out he’s not dead and determines the identity of the person who shot him and two other people.

After the attorney recovers, he vows vengeance against the Chief Medical Examiner for not having figured out he was still alive more quickly. After his vow, he walks out of the office, where he is struck by an ambulance and killed.

OK, so what’s the “punchline?” Yesterday, while vegging out in the bonus/media room, I noticed we have a channel called Start TV among our Hulu + Live TV choices. Wouldn’t you know this channel airs Crossing Jordan? Wouldn’t you know the first episode that was airing after I realized the show was available was the episode I had thought of days earlier?!

On this day in 1954 stockholders of Nash-Kelvinator Corporation and Hudson Motor Car Company formally approved plans for the two companies to merge into a new company called American Motors Corporation. AMC survived until being purchased by Chrysler in 1987.

Independent automobile manufacturers–meaning those not affiliated with the Big Three of General Motors, Ford and Chrysler–really began to struggle in the early 1950s. The Nash-Hudson merger was only one of three that took place during this time. Kaiser-Fraser purchased Willys in 1953 and later in 1954 Studebaker and Packard merged, although technically the transaction was in the form of a Packard buyout.

George Mason was Chairman and CEO of Nash-Kelvinator from 1937 through the merger and the first CEO of American Motors, although he died later in 1954. Many sources state that Mason had been pursuing mergers among the Independents since not long after World War II. Some sources reject that notion; since all of the people involved are dead, we may never know the exact truth.

AMC continued to manufacture cars under the Nash and Hudson nameplates, in addition to Rambler and the Metropolitan. (OK, the Metropolitan was really built by Austin of the UK, but the car was designed by Nash and built for the North American market.) However, Nash and Hudson were discontinued after the 1957 model year so AMC could focus on Rambler. George Romney, who succeeded Mason as AMC CEO, believed the Big Three were selling “gas-guzzling dinosaurs” and that AMC could have a niche offering a different type of car, something like this: 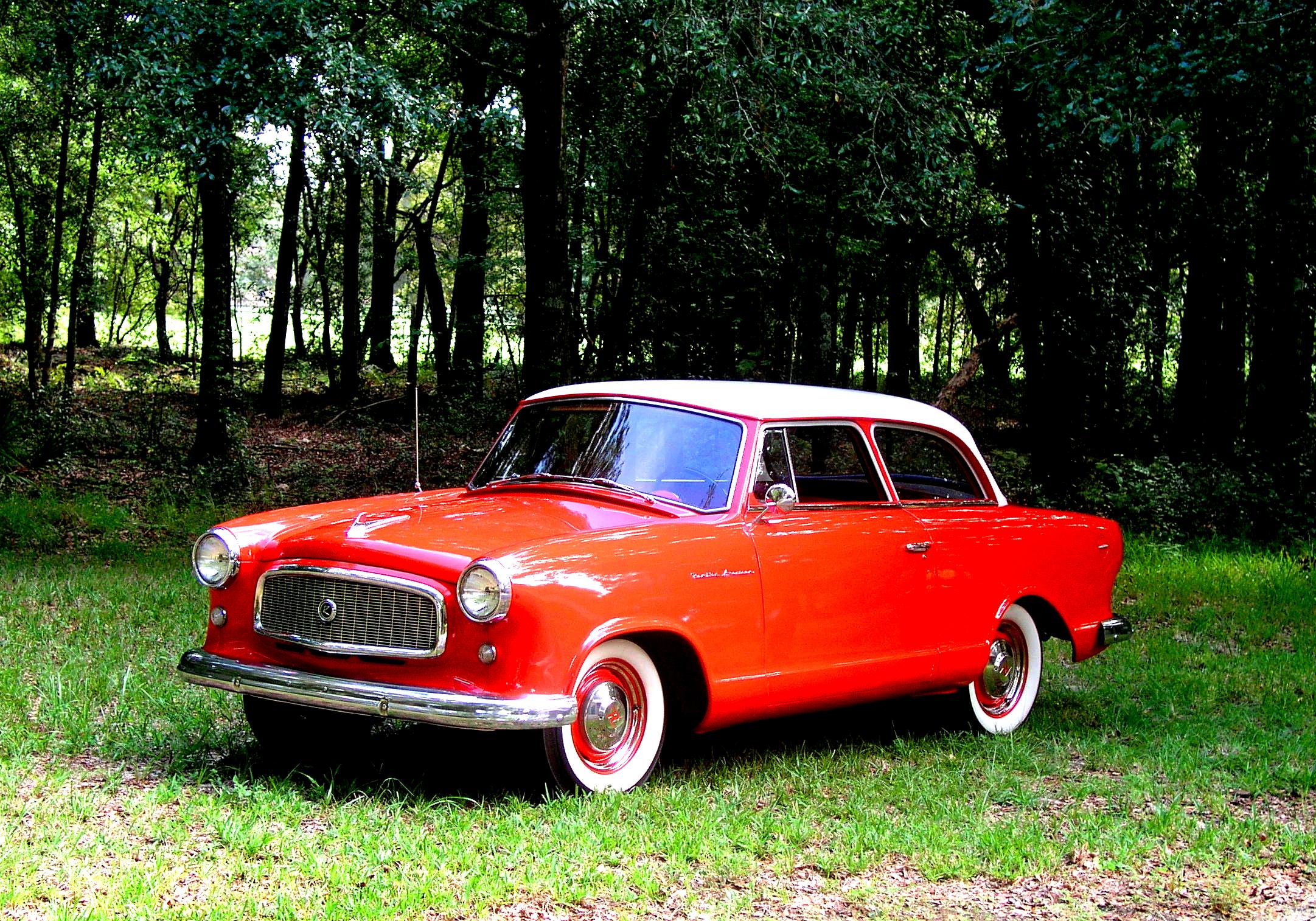 From momentcar.com a picture of a 1958 Rambler American. By 1961, Rambler had moved into the third position among US makes in sales, albeit a distant third behind Chevrolet and Ford.

With the Big Three entering the compact car market and with Romney leaving AMC to wage a successful campaign for Governor of Michigan, AMC lost its way in the mid-1960s. (Yes, he was Mitt Romney’s father.)

Would American automotive history have turned out differently if Romney had stayed with AMC? Of course, we will never know.

“For of all sad words of tongue or pen, The saddest are these: ‘It might have been!'”

John Greenleaf Whittier’s famous line resonates all over human history. Being a car nut I think of this line often in the context of great automobile designs never produced or produced but not successful because of exogenous circumstances.

No, this is not a picture of a first-generation Mercury Cougar:

As the caption reads this is actually a picture of the AMX II with more “traditional” styling than the AMX that was produced. (The resemblance to the first generation Cougar is striking, in my opinion.) Potential buyers may have claimed they liked the styling of the production car better, but only about 19,000 of the first generation AMX (1968-1970) were produced. In 1968 alone Chevrolet produced 235,000 Camaros and Pontiac produced 107,000 Firebirds. Yes, it is somewhat of a specious comparison given the relative sizes of GM and AMC, but it is what it is.

This picture and the ones that follow are shown here thanks to the gracious courtesy of Patrick Foster and the Patrick Foster Historical Collection. (Please do not use these photos without first obtaining permission.) The pictures are from Mr. Foster’s terrific book, American Motors Corporation – The Rise and Fall of America’s Last Independent Automaker. This book and others by Patrick Foster can be purchased here.

The red car was the AMX/2 and the yellow car was the AMX/3 that actually saw very limited production. The AMX/3 looks Italian to me, perhaps a little bit like the Lamborghini Miura. The Italian look is honestly derived as the exterior was designed by Giotto Bizzarrini.

Believe it or not USA Today ran a story about the AMX/3 in December, 2016 titled Just Cool Cars: AMX/3 could have saved American Motors. The text in the story actually contradicts the title, however.

OK, regular Disaffected Musings readers, you all know where this is going. For literally the n-hundredth time fewer automobile manufacturers means fewer sources of innovation for styling and for engineering. The consolidation of car companies also means fewer choices for the consumer and has led, with a big nudge from government regulation, to the homogenized group of automobiles sold today. (No, not all regulation is bad, but ALL regulation comes with a cost just like everything else in life. One definition of an ideologue is someone who refuses to acknowledge that the positions they advocate come with costs.)

AMC was late to the pony car market with the Javelin (one of my favorites) not being introduced until the 1968 model year. The AMX was a derivative of the Javelin. The Mustang was introduced in April, 1964 as a 1964 1/2 (1965) model year car. The Camaro and Firebird were introduced in the 1967 model year. That delay in entering a popular segment hurt American Motors. Still, perhaps it was inevitable that AMC would succumb to the Big Three. Remember, however, that I do NOT believe that what happened was the only thing that COULD have happened. All we can do at this point is simply to ponder what might have been.

Another ho-hum game for Patrick Mahomes in a 45-10 Chiefs’ blowout of the Cincinnati Bengals. He threw for 358 yards in 39 attempts with 4 touchdowns. Mahomes also set a record by throwing 22 touchdown passes in his first eight career games. The NFL has changed the rules many times in the last 40 years; almost all of those changes favor offense and the passing game. Still, Mahomes’ accomplishments so far are noteworthy.