Three divided by 14 is also an interesting number: .214285714285714285714285714, ad infinitum. You see, I spent a lot of time with the first electronic calculator I ever owned, which my father purchased for me from the adding machine shop next to his gas station. This was in the early 1970s. I used that calculator to compute all kinds of baseball, football and basketball statistics. I guess that wasn’t a waste of time, after all.

I’d actually rather eat a piece of pie than to discuss Pi, but I seldom do either. Of course, the formula to calculate the displacement of an engine uses Pi; actually, it uses Pi divided by 4. The full formula is the square of the bore times the stroke times Pi/4 (which is about .7854) times the number of cylinders. An eight-cylinder engine with a 4-inch bore and 3.125 inch stroke (three and an eighth inches) has a displacement of 314 cubic inches. Actually, that displacement calculates as exactly 100 times Pi, so it would be 314.159265359 cubic inches.

Other than a sore upper arm, which has pretty much dissipated by now, I had no side effects from my first damn virus vaccine. I’m knocking on my head to simulate knocking on wood. Maybe it’s no simulation…

On this day in 1962 a car like this was the 75 millionth vehicle produced by General Motors: 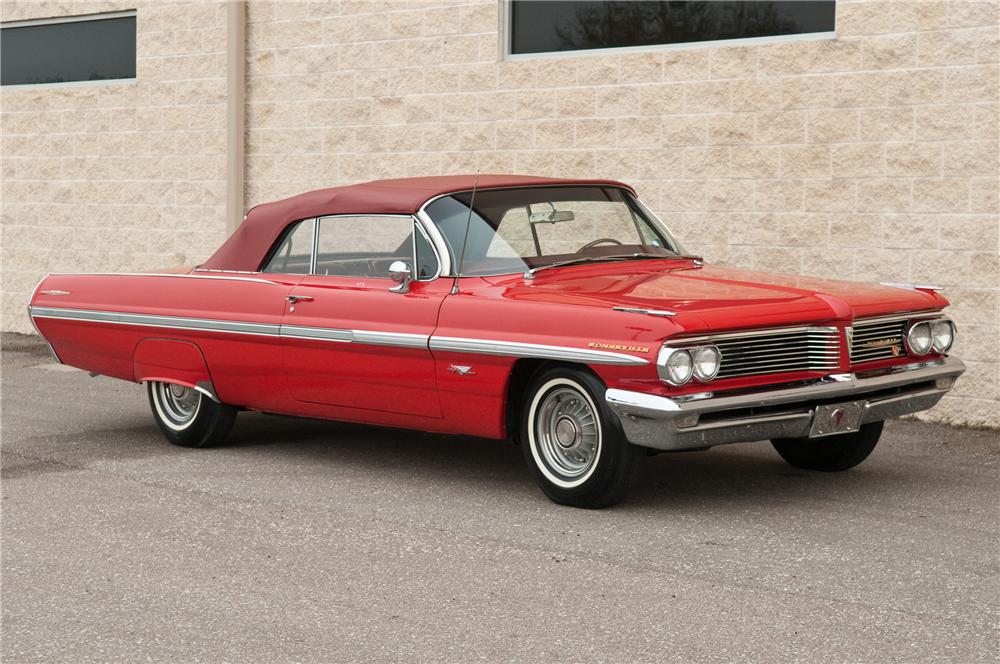 From Barrett-Jackson this is a picture of a 1962 Pontiac Bonneville convertible. Yes, by this time Pontiac bodies resembled Buick bodies which resembled Oldsmobile bodies. Still, some of the trim and accoutrements were different.

Model year 1962 marked the beginning of Pontiac’s eight-year stint as the third most popular make in the US (albeit a distant third), behind only Chevrolet and Ford. Note that this was two years before the introduction of the GTO.

Pontiac built 21,582 Bonneville convertibles in 1962, which were priced at $3,570. It was their second most expensive model that year; the Bonneville Safari wagon cost $3,624.

Of course, I think these cars are fantastic. The legendary 421 Super Duty was available on Pontiac cars in 1962 although I think they were only available on the Catalina and the Grand Prix. (Hey, Bill Stephens, can you help me out?) These engines were officially rated at 405 HP/425 LB-FT of torque, but many “in the know” think those figures are conservative.

Although at present I have absolutely no place to store another car, the thought of buying a car from a defunct American make is beginning to percolate in (what’s left of) my brain. Hey, I could take my time in getting the car through the “iterations of repairs” (quoting John Kraman from his remarks to me last year about what it would take to get an older car to the state of being reliable) since we already have a Grocery Car/Taxi in the 2015 Cadillac ATS.

Oh damn, reality is starting creep back in…