Except for my honeymoon the recent trip to Scottsdale was the only vacation from which I did not want to return. Usually no matter how wonderful the trip by the last day or two I am ready to go home.

Among the many highlights was the opportunity to meet Cristy Lee. She is one of the hosts of “All Girls Garage” on Motor Trend and is also a part of their coverage of the Barrett-Jackson auctions. She is even more beautiful in person than on TV, which really doesn’t seem possible. I’m sure she would like to be known for more than her looks, but her looks are quite formidable.

She was also extremely nice and courteous. Of all the “celebrities” we met in Scottsdale she was the only one who took the time to ask for our name and where we lived. She also asked me if I had my eye on any particular car at the auction. Without further ado: 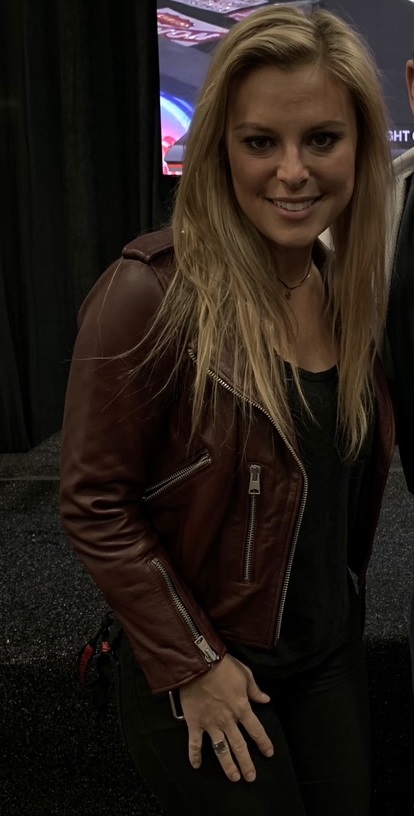 This photo has been cropped as I did not want to ruin a picture of Cristy Lee by including my homely appearance.

Daily views like this were also among the highlights of the trip.

How is it that the sunsets (and sunrises) in Arizona are so beautiful?

Like everything else in life, being intelligent is neither all good nor all bad. My brain went into overload condition trying to figure out what I wanted to do regarding an automobile purchase. When Cristy Lee asked me if I had my eye on a car at the auction, this is the one I mentioned:

This is a 1963 Corvette restomod. The car intrigued me because it had a new engine, a modern automatic transmission and has been converted to disc brakes. Yes, the stance is off, but that can be corrected. Upon inspection it looked good without too many warning flags. Ultimately, I decided against buying the car because even though it was a newer engine, it was a carbureted engine. As I have written many times (so many that regular Disaffected Musings readers are probably sick of reading it), this is 2019 and I am not driving a car with a carburetor. Therefore, I would have incurred the additional expense of buying and installing a new engine. (Yes, upon reflection I probably could have had an EFI conversion kit installed, but parts and labor are still not free.)

Also, the fact that this was a chopped-up split window car bothered me a little. I have no problem with restomods; in fact, I prefer them (duh!), but this is kind of a sacred car, like a 1937 Cord 812. Steve Dallas valued the ’63 restomod at $40,000. I wrote him that I would probably not bid more than $50,000; the car hammered at $60,000, but I did not bid on it. Once again, I want to extend my thanks to Steve who responded to my many emails asking what I should do. He and I have never met nor spoken voice-to-voice, but I consider him to be a friend and am very appreciative of his contributions to this blog.

Since this should be Throwback Thursday and speaking of a 1937 Cord:

The Auburn-Cord-Duesenberg museum is a place that my wonderful wife and I really want to visit. This car hammered at $210,000 meaning the buyer actually paid $231,000.

I forgot to mention this earlier today…

I am REALLY obsessed with cars (duh!). I had a dream last night that I was entrusted with the care of a 1937 Cord at a large car gathering. I sat in the passenger seat and strangers would get into the drivers seat. One stranger asked if he/she (don’t remember the gender) could start the car. I said no, but he/she put the car in neutral and it started to drift backwards. I said that as long as the car wasn’t started everything was alright.

Yes, a strange dream, but if the shoe fits…

I took this picture a couple of months ago at the large annual car show hosted by a local museum. It is, of course, a 1937 Cord. Anyone else care to share any strange car dreams?

Yesterday was the annual car show held by a local museum that I look forward to every year. (Sorry for the poor syntax, but I am very tired.) I have come to the realization that I REALLY love cars (the definition of DUH!) and have to be involved in the automobile industry in some way. If anyone has any original ideas, I am all ears.

This 1955 Packard Caribbean convertible literally moved me to tears. 56packardman.com has informed me that, besides being his favorite 1955 color combination, the colors are White Jade, Rose Quartz and Grey Pearl Metallic. The owner of this car also brought a 1954 Cadillac Eldorado and 1957 Cadillac Biarritz to the show. I don’t know the exact number, but I would estimate the total number of cars at about 575. For the nth time I am so tired of the homogenized offerings of today’s large automobile manufacturers. I think the debilitating sameness explains why so many car aficionados gravitate towards exotic cars like Ferrari and Lamborghini.

This real 1937 Cord was the biggest surprise of the show. The owner of this car owns about 25 cars, but this was the only one he brought on this day. I attended the show with my wonderful wife (as always), my amazing niece and a cousin from Israel. My cousin very much enjoyed the show, but I couldn’t convey the significance of this car.

This is a beautiful 1955 Buick Roadmaster. As I have written before I have an affinity for mid-1950s Buicks as the first car I ever drove was a 1956 Buick Century that my father owned for more than 20 years. By the way, after a period of cloudy, rainy weather that seemingly lasted for weeks we were fortunate to have a beautiful day for the show. It is raining again today. Enjoy the good moments and Carpe Diem!

OK, this is the obligatory photo of a C2 Corvette. I don’t know if my restomod is going to be a 1964 model like this one (I would prefer a 1967, all other things being equal), but if mine looks like this when it’s complete I’ll be very happy. I also have no idea when my car will be complete as I have not signed any paperwork, official or otherwise, with any company to have my restomod built. Still, people keep saying to “Think Positive” and that if a person writes down a goal it is more likely to be fulfilled.

Do you know who Ed Cole was? He was born on this day in 1909. He was an important person in the history of General Motors and in the history of the American automobile industry, in general. (How about that juxtaposition in word use?!)

Cole was promoted to Chief Engineer of Chevrolet in 1952. He was in charge of the development of the legendary small-block Chevrolet V-8 engine, of which more than 100,000,000 were produced from the 1955 model year into the early 21st century. Cole and Zora Arkus-Duntov rejuvenated the Corvette and sent the car on its way to becoming automotive royalty.

Sadly, Cole died while piloting his private plane just three years after retiring from General Motors. I think his birthday is a very appropriate time to remember him and his contributions.

Would you be interested in listening to “podcasts” from me even if those podcasts were just me talking for 4-5 minutes? As always, I welcome feedback from you.

If you’ve arrived here after clicking on a link from Hemmings please bookmark the blog URL (https://disaffectedmusings.com) and return often. Thanks.