After many calls and online messages sent via the “patient portal” I was able to get follow-up bloodwork. I almost wish I hadn’t. While all other relevant values remained normal, my lipase level was even worse (higher) than before. I am hoping that this is simply a stress reaction and when the house situation is resolved, one way or another, my lipase level will return to normal. Of course, who knows how long it will actually take and how many hoops I will have to jump through to get another round of bloodwork.

Here are some links to posts in Why Evolution Is True. I will try to present them with as little comment as possible, other than to say that some of them show the world is becoming unhinged.

“It’s the Democrats, particularly the “progressive” wing, who see no distinction between legal immigration, based on persecution, and illegal immigration based on a search for more well being. And every prospective immigrant knows that if they’re in the latter class, it’s best to lie and say you fear persecution. The Left has ignored that palpable truth, and that’s why we’re in a crisis.” – Coyne

“The Democratic Party remains committed to immigration and immigrants, but it does not make enough of a distinction between immigrants who come into the country following laws and those who come in by crossing the border illegally. Everyone should be treated humanely, but those who follow the law and those who break it cannot be treated alike.” – Zakaria

Remember that Coyne and Zakaria self-identify as liberals.

Evidence for evolution: Hairless animals have dead genes for a full coat of hair.

Ideology stomps all over chemistry in a new paper.

College students afraid of speaking out about controversial issues: the U.S. versus New Zealand.

I almost wish I would live long enough to see the dissolution of the US.

OK, maybe you think I should write about the official debut of the Corvette E-Ray, the first hybrid Corvette and the first available with all-wheel drive. Obviously, it was not a coincidence that the car premiered yesterday on the 70th anniversary of the first unveiling of the Corvette.

As I have written previously, the E-Ray was pegged more to the modern Acura NSX hybrid than to hypercars like the McLaren P1 and Ferrari LaFerrari. Apparently, that role will be played by the upcoming Zora variant of the Corvette, which will probably be available beginning with the 2026 model year.

I am more convinced than ever that, barring everyone coming to their senses, the C8 will be the last Corvette generation available with any type of internal combustion engine AND that the C8 Corvette will be GM’s last such vehicle, period. By the way, here is Chevrolet’s webpage devoted to the E-Ray Corvette. From Forbes a picture: 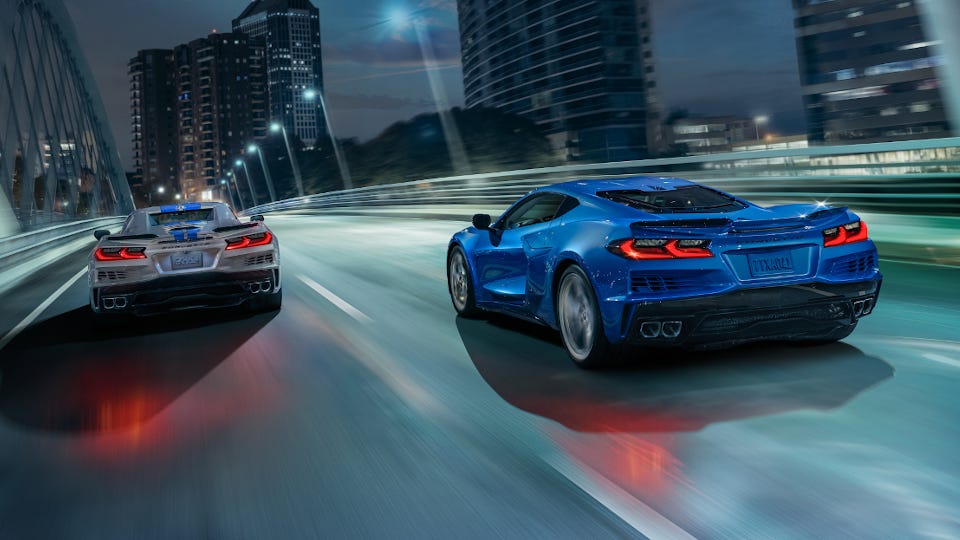 The rear is still ungainly to me. Combined with the electric motors that power the front wheels, the E-Ray is supposed to have 655 HP and be able to accelerate from 0-60 MPH in 2.5-2.6 seconds. The MSRP for the base coupe is $102,900; I’m sure no one will actually be able to buy that car from a dealer at that price.

Sorry, but I’m not going down this road. I will drive my ICE-powered cars until I’m not driving any more.

2 thoughts on “Hell In A Handbasket Wednesday”