In a postscript yesterday I noted that the numbers of blog views and visitors on Thursday were the highest in the previous 30 days. Well, yesterday (Friday) saw 44 percent more views and 49 percent more visitors than the day before, an unusually large one-day change. All I can write is, Thanks! Oh, I can also ask you to please keep reading and to please tell your friends about this blog.

Yesterday brought some news that, at least temporarily, has partially mitigated the disappointment I mentioned in yesterday’s post, but the news happened long after I published. If there’s a one in a million chance that offering good wishes actually works, then please send those good wishes our way.

The good news was not that we were one of 14 tickets that matched the five non-Megaball numbers, which has a seven-figure prize, in last night’s Mega Millions drawing. One winning ticket was sold in Maine; the pre-tax cash value was over $700 million.

I believe last night’s jackpot was the second largest lottery prize in US history. The largest, a Powerball drawing with an annuity value of $1.5 billion and almost $1 billion in cash, was split three ways as three winning tickets were sold. For only one ticket to match in last night’s Mega Millions drawing means that person/family in Maine was really lucky. As the jackpot grows to extremely high levels, the number of tickets sold grows even more meaning the likelihood of multiple winners also increases substantially.

Former University of Arkansas and NFL running back Peyton Hillis has been removed from a ventilator after nearly drowning while saving his children from drowning. Hillis, who was not a starting running back/halfback at Arkansas but the fullback who blocked for stars like Darren McFadden, is probably best known for appearing on the cover of the Madden computer football game in 2011 after his breakout 2010 season with the Cleveland Browns.

Hillis had only 203 rushing attempts in four seasons (although he did catch 118 passes) as a Razorback and only 81 carries in his first two NFL seasons with the Broncos before being traded to Cleveland. Multiple injuries to Browns’ running backs that season (2010) led to Hillis becoming the starter and rushing for 1,177 yards and 11 touchdowns in addition to catching 61 passes and two more touchdowns. It’s not mentioned anymore, but Hillis was the first white running back since Craig James in 1985 to rush for 1,000+ yards in an NFL season.

For a former seventh-round draft pick (in 2008), the NFL Draft has had only seven rounds since 1994, Hillis had a very good career, but one that was short-circuited by concussions and chronic hamstring issues. His last NFL season was 2014–he was 28–with the New York Giants.

Not that he or his family will read this, but I wish Peyton Hillis all the best and a speedy recovery. 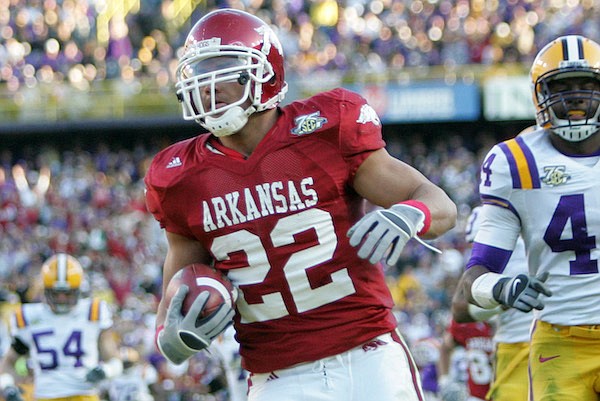 On this day in 1954, what was the largest corporate merger in US history at the time was announced. That event was the merger of Nash-Kelvinator with Hudson to form the American Motors Corporation (AMC).

Of course, AMC lasted until it was purchased by Chrysler Corporation in 1987. Although some automotive historians dispute the following, the historical consensus is that Nash-Kelvinator, and later AMC, Chairman/CEO George Mason ultimately wanted the four largest US independent automakers–Packard and Studebaker in addition to Nash and Hudson–to merge into one company that could compete with the Big Three. Mason died unexpectedly in October, 1954 and his wishes were never executed.

My favorite AMC car wasn’t introduced until the 1968 model year, the Javelin. I’ve always thought the Javelin looked at least as good as the Camaro/Firebird and better than the Mustang, the other automobiles in the Pony Car segment. The Javelin was far more successful than the car it replaced in the AMC lineup, the Marlin, but still fell far short of its Big Three rivals in sales.

On a total tangent…perhaps as a side effect from the stress we are experiencing in trying to sell our house, which itself might be contributing to my health issues, I was just overcome by a desire to simply delete this post I have been writing for the past 30+ minutes. Deep breath…

Anyway…while Tesla reaching the million mark in sales in 2022 shows that an “upstart” company can make headway in the US automobile market, if predictions come to fruition like one recently issued by Goldman Sachs that Tesla’s share of new electric vehicles sold in the US will drop from 80 percent to 20 percent in the next 5 years, then maybe the Big Three are still too powerful to overtake. Of course, given the not that distant bankruptcy by two of those companies in 2009, maybe they are still vulnerable to competition, at least from outside the US.

8 thoughts on “The Day After Friday The 13th”