Originally I was going to write about a friend of mine in junior high and high school who, because he was born on this day in 1959, did not have to register for the military draft when it was re-instated in 1980. I did have to, however, and receiving official notification of such caused one of the worst days of my life because my marvelous mom thought I had actually been drafted.

After feeling better for a few days I feel much worse today. I am peeved beyond words that I cannot have imaging I need until the second week of February. When this appointment was made I asked the person on the phone, “What if I have something serious, something for which time is of the essence?” She had no answer.

I am convinced that many people are taking advantage of the situation caused by the damn virus and are doing as little at work as they can. Employers, it seems, don’t think they can hire replacements so they tolerate poor job performance. In a related vein, it seems as though fewer people want to work than ever before. Almost all of us suffer from these maladies as a result. That’s my story and I’m sticking to it.

Via Hagerty comes this KPMG survey of automotive executives. One of the main findings was, “Expectations of global electric vehicle (EV) sales in 2030 are becoming more realistic. In 2021, executives predicted that EVs would capture between 20 percent and 70 percent of the market by 2030. Now they are taking a more cautious view of the challenges of shifting to battery power, with forecasts varying from 10 percent to around 40 percent of sales by 2030. Specifically, executives have greatly tempered their expectations about EV sales growth in India (poor infrastructure), Brazil (biofuels as an alternative) and Japan (a focus on hybrid and energy sources other than batteries).”

Of course, the Hagerty story only mentioned 40 percent versus 70 percent and not the entire range. Don’t kid yourselves: the government and mainstream media are engaged in a propaganda war to brainwash us that we HAVE to drive electric vehicles in the near future.

Adrian Clarke of Hagerty wrote this piece titled, “Vision Thing: The best-designed vehicles on the market today.” His favorite car new car for sale is “probably” this one: 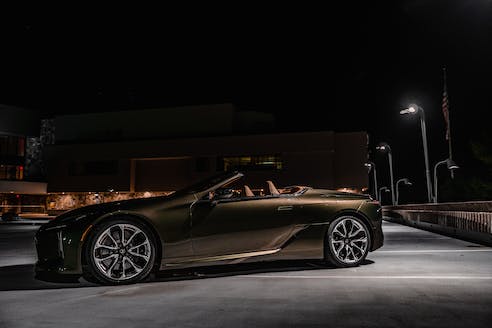 This is a Lexus LC 500 convertible. Its sibling, the LC 500 coupe, has been listed in all three iterations of my Ultimate Garage. I’m not sure that I don’t like the convertible just as much.

At one point before I bought the Mustang GT I thought about trying to trade my Z06 and Buick Cascada in one transaction in order to acquire an LC 500 convertible. The ragtop is more expensive than the coupe–good used ones are still six-figure cars–but this is Arizona and I think a convertible with more power than the Cascada would be a great idea. In the end, however, I decided that simpler is almost always better than complex and I also didn’t want to have shell out many thousands more on top of what I would have received in trade for the two cars.

In the back of my mind–well, maybe not too far back–I think that I will own an LC 500 at some point in the future. Maybe that’s just wishful thinking. Who knows what the future holds or how long it will be?

4 thoughts on “The Blank Stare At The End”