Despite starting the season 6-4, South Carolina’s football team has had an outsized influence on the College Football Playoff (CFP). Last week, they defeated Tennessee 63-38 at Tennessee to end the Vols playoff hopes. Yesterday, they came back from a 9-point halftime deficit to beat Clemson 31-30 ending their 40-game home winning streak and their playoff hopes as well.

As I have written before, something I can’t quite articulate really rubs me the wrong way about Clemson’s head coach. His team resides at the bottom of my college football hierarchy along with the other team that beat them this season, Notre Dame.

With Michigan’s convincing win over Ohio State in “The Game,” USC’s win over Notre Dame and Texas A&M’s upset of LSU, I think the four teams for the CFP may already be set: Georgia (12-0), Michigan (12-0), TCU (12-0) and USC (11-1). I guess the latter two teams have to win their respective conference championship games next week, but maybe not.

Speaking of Michigan-Ohio State, the Buckeyes had a 20-17 halftime lead and according to ESPN analytics had an 85% chance of winning the game at some point in the second quarter. Michigan didn’t pay attention to any of that and completely dominated the second half outscoring Ohio State 28-3 and defeating the Buckeyes in Columbus for the first time since 2000.

Michigan sophomore quarterback J.J. McCarthy only completed 50% of his passes yesterday (12-of-24), but I guess even in college yards per pass attempt is the more significant metric. He averaged about 11 yards an attempt, a great number, throwing for 263 yards. He also did not throw any interceptions. In all, Michigan scored five touchdowns on plays of 45 yards or more, the most against a top-5 opponent since at least 2004.

I have to admit that I turned off “The Game” after Michigan scored on a 75-yard run by backup tailback Donovan Edwards, who was playing with a cast on a broken hand, to make the score 38-23 with about seven minutes left in the game. I missed Edwards scoring on an 85-yard run about four minutes later. I also changed the channel after USC quarterback/magician Caleb Williams scored a touchdown early in the fourth quarter to make the score 31-14, USC.

I think Williams deserves the Heisman Trophy, which is given to the player that is voted the best in college football that season. He has thrown for more than 3,700 yards with 34 touchdown passes and only 3 interceptions, is averaging over 9 yards an attempt through the air AND leads his team with 10 rushing touchdowns. Both he and South Carolina quarterback Spencer Rattler started their college careers at Oklahoma (and were teammates last season), but both transferred, obviously. 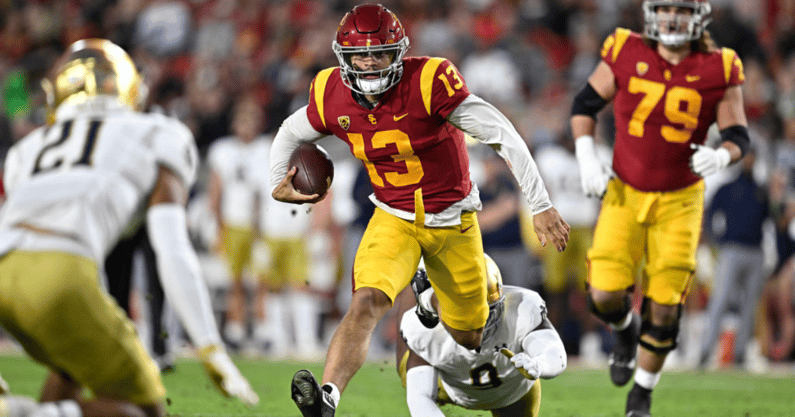 Yes, I am enjoying watching college football more than I have in a long time. Maybe Matt Rhule can return Nebraska to national relevance and I will enjoy it even more.

On this day in 1996 the last Cadillac Fleetwood left the assembly line. Although the Fleetwood existed as its own model “only” since 1976, it had been used as part of Cadillac model names since 1935. Of course, the plant used to make Fleetwoods in Arlington, Texas switched to only building full-sized General Motors SUVs.

Nearly 20 percent of Cadillac dealers took a buyout instead of spending a quarter of a million dollars to convert to selling electric vehicles. General Motors gave them that ultimatum. Once again, at least for now Ford is still giving dealers and consumers a choice. How long they will continue to do so is an open question.