Sorry to keep writing about having nothing to write about, but it is what it is.

I would ask of what significance is this car, but the answer is in the photo.

A junior high/high school friend of mine, Steve B, drove one of these, his mother’s, once he acquired a drivers license. I remember his driving it to my house in the aftermath of a heavy snowfall and one of the tire chains snapping and flying off the car as he began his trip home.

On this day in 1971 Intel first advertised its new microprocessor, the 4004. It was the first commercially produced microprocessor.

From Wikipedia a picture of a white ceramic 4004 with grey traces. Without question, the microprocessor is one of the five most important inventions in human history. The phone you carry in your pocket has more computing power than all of the computers used in the Apollo space missions. Continued increases in microprocessor capacity have since rendered other forms of computers almost completely obsolete, with one or more microprocessors used in everything from the smallest embedded systems and handheld devices to the largest mainframes and supercomputers.

My wonderful wife sent me the link to an article about this car: 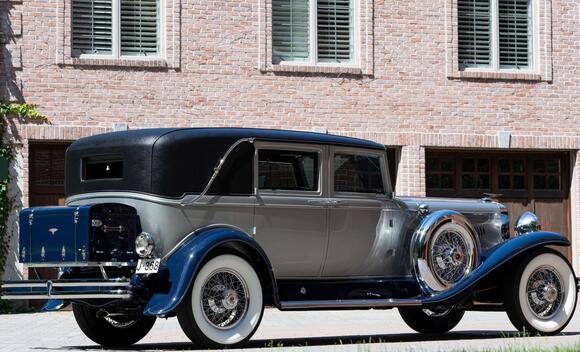 This is a 1930 Duesenberg Model J limousine, coachwork by Willoughby. Fewer than 500 Model Js of all types were built: 445 Js and 36 SJs. The SJ was a supercharged Model J.

Of course, Duesenberg supplied a powered chassis and radiator grille and the owner would hire a company to design and to build the body. In 1930 it was not unusual for one of these to end up costing $20,000, which is equivalent to about $360,000 today. While it was just bad luck, to introduce a car like this just before the stock market crash and Great Depression was bad timing for the Model J.

E.L. Cord’s automotive empire, of which Duesenberg was a part, collapsed in 1937. In my opinion, the void left by the end of Duesenberg has never been filled by an American company. Probably too late–in my opinion–Cadillac is attempting to enter the ultra-luxury market with its announced $300,000 Celestiq. We’ll see how that goes.

12 thoughts on “What To Say On Tuesday”