Originally, I was going to title today’s post “Sunday Sampler” and write about a miscellaneous group of topics. However, after watching two classic college football games I thought I would write about them, at least a little bit. Of course, the word “audible” has a football meaning referring to a last-second change in the play call.

In a comment to David Banner (not his real name; by the way, everyone should read the comments) I wrote “Yes, the game was ‘quite the fight’ as I had ‘predicted,’ but I was wrong about Bryce Young; he seemed like 100% to me.” The game to which I referred was, of course, the classic played yesterday at Neyland Stadium in Knoxville, Tennessee where the undefeated Volunteers beat the previously undefeated Alabama Crimson Tide 52-49 on a field goal on the last play of regulation.

I won’t get into a long analysis; I just want to make a couple of points. Alabama was called for a mind-boggling 17 penalties for 130 yards. That is the most ever called against a Nick Saban coached Alabama team. One of those penalties negated what probably would have been a game-clinching interception and long return. (By the way, I really did not have a dog in the fight and that made the game more enjoyable.) It is virtually impossible to beat a quality team in their stadium while getting called for that many penalties, although Alabama almost pulled it off.

If the ESPN tidbit shown during the second game was correct, the 52 points Alabama allowed yesterday was the most they’ve allowed in a game since 1907. Some Alabama aficionados are not fans of Alabama’s defensive coordinator, Pete Golding. Tennessee had enormous success with the same play over and over, stacking two wide receivers and then having the trailing wideout run at the safety and then slant towards the middle. Tennessee wide receiver Jalin Hyatt caught five touchdowns on that play.

To be fair, Alabama’s vaunted pass rush was not a factor for most of the game. Will Anderson, thought by many (including yours truly) to be the best pro prospect in the country, was invisible.

It was the first time Tennessee beat Alabama since Saban became Crimson Tide head coach in 2007. It was also the Vols first win against a Top Ten team since 2006.

I didn’t watch all of the second game I had intended because USC got out to an early 21-7 lead at Utah so I changed the channel. Later, just out of curiosity I tuned to the game and when I saw it was tied 28-28 I decided to watch the rest of it. For reasons I will not divulge, I am not a big USC fan although my distaste for them does not match how I feel about Notre Dame and Clemson.

Utah scored a touchdown with 48 seconds left to trail 42-41. Give their long-time head coach Kyle Whittingham credit. Instead of trying an extra point that would likely send the game into overtime (I loathe and despise the college football overtime “system”) Whittingham instructed his team to attempt a two-point conversion. Star Utah quarterback Cameron Rising improvised when his reads were covered and scored the two points himself.

Just like in Alabama-Tennessee, what would have been a game-clinching interception for Utah in the waning moments was nullified due to a penalty. Unlike Alabama, though, Utah hung on to win 43-42 to give USC its first loss of the season.

After the game, the cameras showed Utah tight end Dalton Kincaid in tears. He had a performance for the ages catching 16 passes, including one touchdown, for 234 yards. Shortly thereafter, the cameras caught star USC quarterback Caleb Williams in tears as he was walking off the field. Williams later said, “I’m going to be honest, I hate losing. I really, really, really, I hate it, simply. So, yeah, I had a little emotion.”

I think college football is more exciting than NFL football even though college games are too long. The college game seems less scripted, less predictable. Maybe this is all in my head (what a terrible place to be), but I can somehow sense a greater level of enthusiasm, even just watching on TV, from those in attendance at a college game compared to an NFL contest.

The photo below, Kincaid being tackled by a host of Trojans, is from Scott Winterton of The Deseret News. 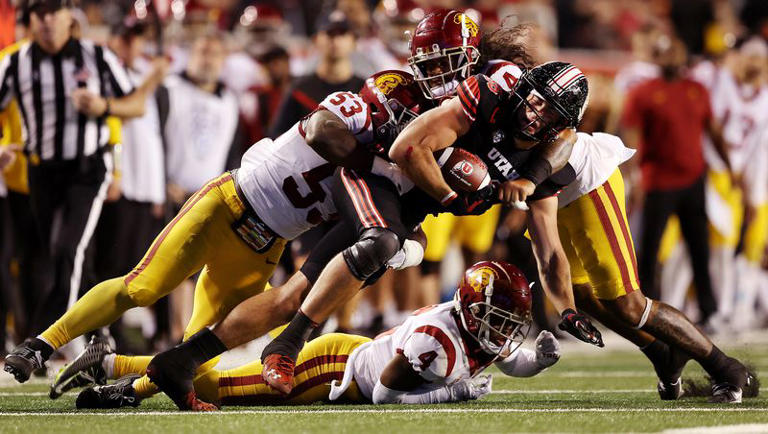 To those of you who read for the automotive content: such content will be a smaller part of this blog going forward. You’ve probably noticed the change, already. For the nth time, I have ZERO interest in pickup trucks, SUVs and electric vehicles. As such, it is not likely that I will start any new series of automobile posts like Threes And Sevens.

While some of you may read less–or not at all–given these changes, writing about other topics, especially sports, does seem to be good for readership. Given I worked 20+ years in major league baseball and wrote a book about the NFL that The Wall Street Journal called without a doubt the best book of its kind ever written, writing about sports is hardly inorganic for me.