Here are links to three posts from Why Evolution Is True:

From the first post I did find the first part of the comment from a blog reader to be particularly on the mark:

“The Social Justice theocrats are almost impossible to debate, as they are fundamentalists who honestly believe they are the repository of all holy truth…”

Once again, is a cult.

The part about Columbia ranking last in free-speech hits home to me for a couple of reasons. The first is that a cousin of mine, but not someone with whom I communicate regularly, worked there for many years. The second is that when I was in high school a recruiter from Columbia chose me among five students with whom she wished to meet. My high school graduating class had 530 students. I have always joked that I was chosen because I was the Jewish student with the highest grade point average.

If I had attended Columbia, and assuming I would have survived because the school’s neighborhood was quite dangerous in those days, my life would have almost certainly turned out differently. As an Ivy League graduate I would have been considered among “the anointed” and I am not using that phrase as Thomas Sowell uses it.

I might not have pursued baseball as a career, but I would still be able to work at an interesting job if I wanted to. When I list the reasons I have been shunted into the employment backwater, my lack of an Ivy League degree is always among them.

On this day in 1953 Swanson sold its first TV dinner. In April of 1955, the Campbell Soup Company acquired Swanson. By the next year annual sales of TV dinners reached 13 million.

I remember eating TV dinners not infrequently when I was young and usually I was not eating them while watching TV. I don’t remember the brand name, but I remember that I enjoyed a particular fried chicken TV dinner and probably ate it once or twice a month. Maybe this was it: 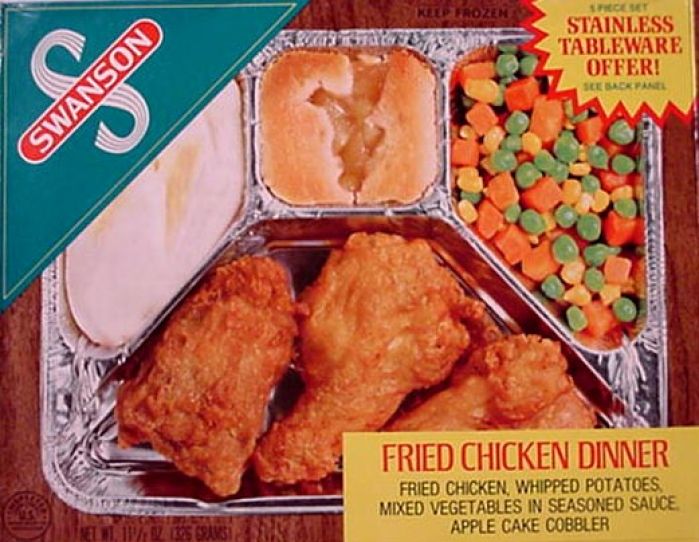 The trend today is to subscribe to a service to have “fresh” dinners with “natural” ingredients delivered on a regular basis. We have never looked into subscribing, but I doubt those services are inexpensive. I did not grow up with money and frozen TV dinners were an economical way for my mother to feed us.

A tangent: I used to enjoy cooking, but have lost virtually all patience for it. Breakfast is almost always either cereal at home or dining out. Lunch is almost always eating something prepared by a restaurant. With my terrible GERD I don’t/can’t eat dinner. I snack on protein bars and dark chocolate, but I am almost always hungry–like as I am writing this. Time for breakfast…