This might now be my favorite commercial ever. It has returned to the airwaves after a hiatus of at least a few months. I have to admit that I tear up half the time I see the spot.

I also have to admit that this commercial makes me want to bring something like this home: 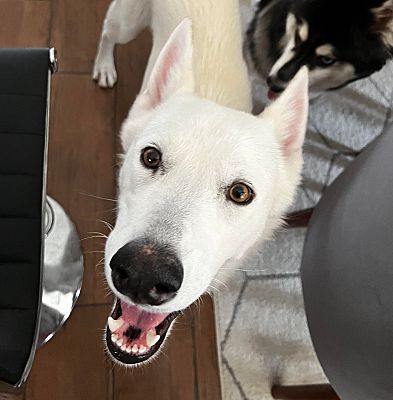 This is Layla, a Siberian Husky/Alaskan Malamute/German Shepherd mix. She is about a year and a half old.

We had German Shepherds in our house from the time I was 8 until I was about 13. They were a mixed bag, to be sure, but the good ones were such a joy to have around. How about this excerpt from this piece?

“Trisha McNair, MD, who has extensively studied the relationship between lifestyle and longevity estimates that dog ownership adds about two years to your life.

And science backs her up. The American Heart Association has found that dog ownership lowers the incidence of cardiovascular disease and speeds recovery from heart attacks. Other research has shown that petting a dog lowers people’s heart rate and blood pressure.”

My wonderful wife is not a dog person so we have never owned one. Maybe, just maybe, when we move into a house with a much bigger lot I can talk her into acquiring a dog like Layla.

Since this has basically been a car blog I have assumed that readers want such content, which is why I have usually tried to include some in each post. With the motorized vehicle market moving in a direction that doesn’t interest me, I have often struggled to find such material. I am just going to write what I want to write and not try to force stuff about cars into each post.

Here are a couple of links to posts from Why Evolution Is True.

Words as violence: Dave Chappelle and freedom of speech

I don’t agree with all of Jerry Coyne’s views, but he seems not to be a blind adherent of ideology. Here is something he wrote in the first post that showed he is brave:

“As for Islam, I regard it as the most dangerous current religion, though Catholicism used to be at the top. Right now only four words need be said, “Charlie Hebdo” and “Salman Rushdie”. All religions should be criticized and, when necessary, mocked, and none are exempt, including Islam, which especially deserves opprobrium for its violence and oppression.”

I hope this video is not a dud:

The light was fading and the video looked grainy while I was shooting it. I guess I’ll know shortly how it looks. (Now I know; sorry for the distracting TV in the lower right.)

When I put a video into a post all I see is something in brackets starting with wpvideo and then a bunch of letters. When I first wrote this post I actually copied the form with made up letters, but when I published it the post actually displayed a blank video box with an error message: “This video doesn’t exist.” Live and learn; well, at least some of us still operate by that axiom.

2 thoughts on “Maybe I’m Getting Soft”