Yesterday I was looking forward to writing this post. Today, not so much. Still, I will try to write at least one of these every week.

Oh…I want to acknowledge the readers from the following countries (in alphabetical order): Brazil, Canada, India, Israel, Italy, the Netherlands and Nigeria. Of course, Canada has accounted for 4 percent of all views–and about 5 percent so far in 2022–since I started writing Disaffected Musings in January, 2018. The other countries have accounted for about 5 percent of all views this year.

On February 11, 1937 a 44-day sit-down strike against the General Motors plant in Flint, Michigan ended. GM agreed to recognize the United Auto Workers (UAW) as the bargaining agent for workers.

Ford, specifically , would not recognize the UAW. On May 26, 1937, at The Battle Of The Overpass, men from Ford’s “Service Department” attacked several union organizers. After images of the incident were released to the public, support for and his company greatly decreased. Ford did not sign a contract with the UAW until 1941.

While the recent plague of corruption among UAW leadership weakens support for unions (and is just more evidence that most people who seek power are corrupt and that acquiring power further feeds that corruption), I think there is little doubt they were needed in the 1930s.  Whether they are needed today is an open question, in my opinion, but the fact is that unions are of very little consequence in the US.

In 2021, only 6 percent of private-sector employees belonged to a union. Contrast that to 34 percent of public-sector workers. The total unionization rate was about 10 percent. For the first year that comparable data is available, 1983, that rate was 20 percent.

I think the significant amount of coverage of recent attempts to unionize Amazon warehouses exists because of the decline in union influence. How that will all shake out is anyone’s guess.

Elsewhere in the US auto industry in 1937:

While the output of 3.9 million cars represented a 6.7% increase from 1936 (and a 160% increase compared to 1933), sales declined sharply late in the year as a very serious recession hit the US economy. Unemployment remained high at 14.3% in May, 1937, but by June of 1938 had increased to 19.0%. The data strongly suggests that World War II, and not the New Deal, ended the Great Depression.

Ford re-took the lead in model year sales over Chevrolet. Just as in 1933, Plymouth finished a strong third. Those three makes accounted for almost 60 percent of sales/production. The Standard Tudor 5-passenger sedan was Ford’s best-seller in 1937 accounting for a third of the company’s output at about 308,000 units. Below, a photo of “the big dog” for 1937: 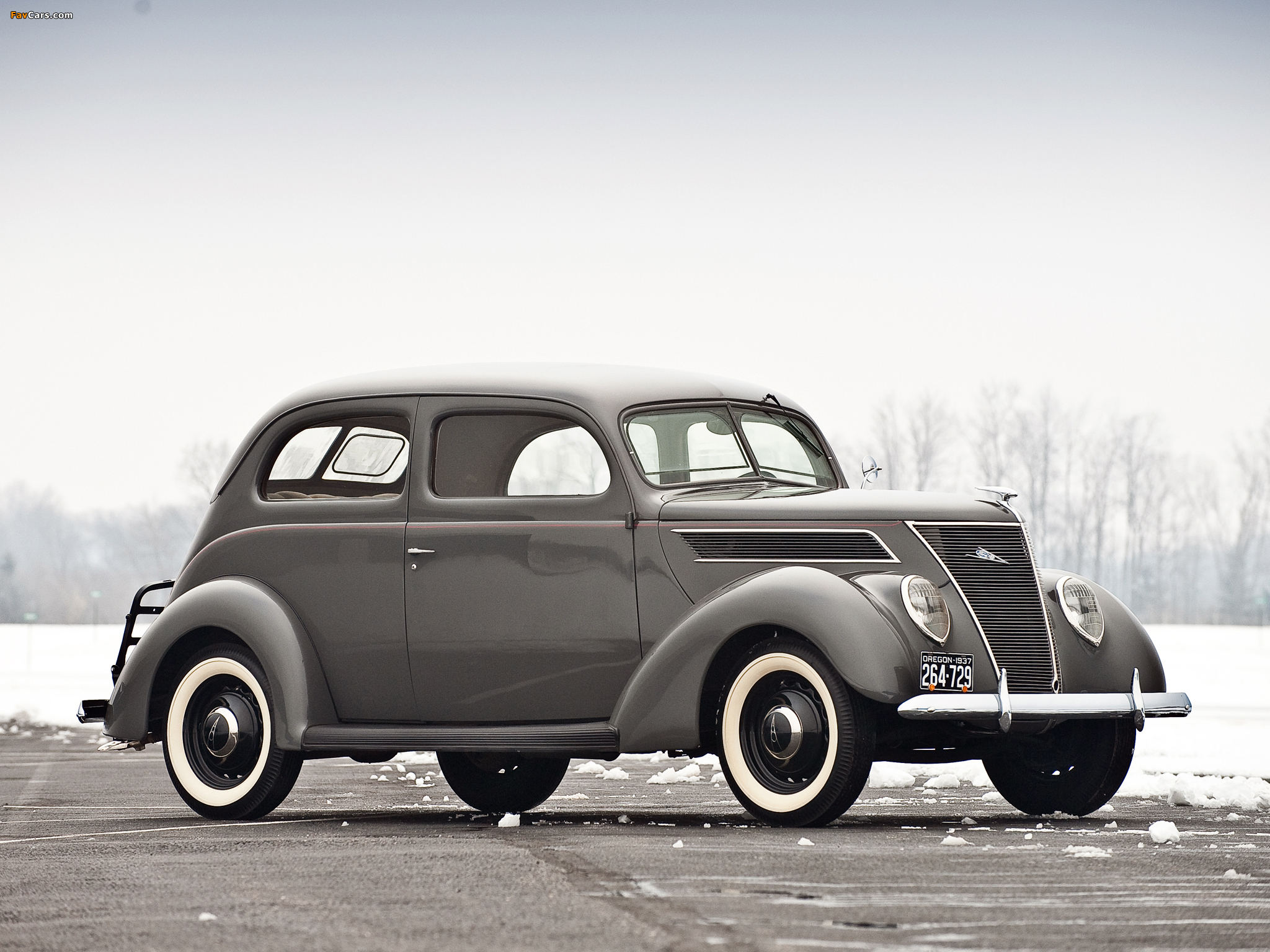 E.L. Cord’s automotive enterprise ended in 1937 as he sold what remained of the company to The Aviation Corporation in August. While it’s not clear if any Duesenbergs were actually produced that year, Cord’s namesake car was: 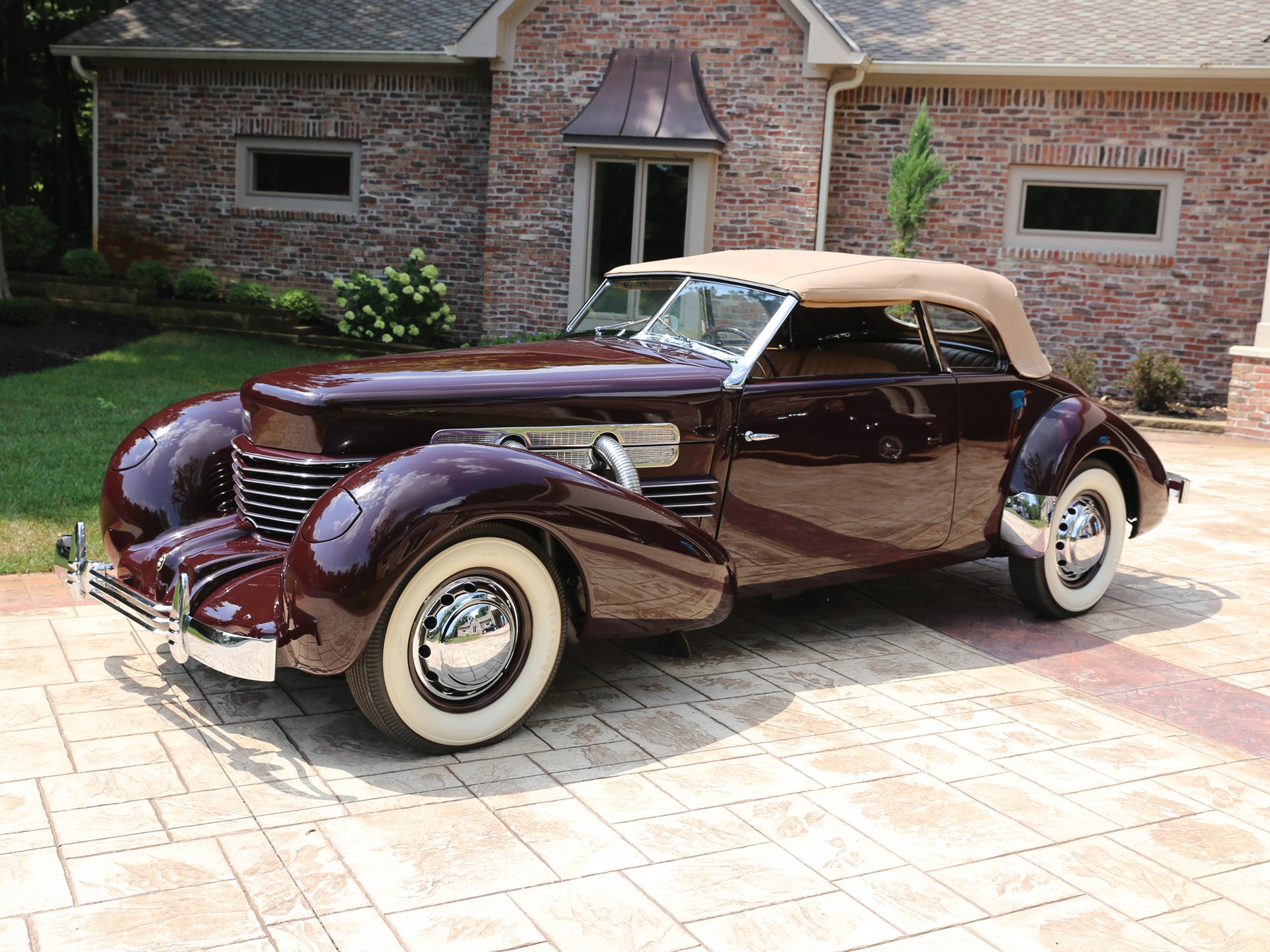 While these cars are revered today by many automotive enthusiasts, the dirty little secret is that they were not reliable. They were plagued with balky transmissions and with overheating. However, all of the cars of Cord’s empire–Auburn, Cord, Duesenberg–are highly prized today as a reminder of when some American car companies aimed very high.

Packard produced the most cars of any year in its history–109,518–in 1937. The new 115C, introduced in September of 1936, was very popular. That model actually competed against 6-cylinder Dodges, Pontiacs and Studebakers as it could be purchased for as little as $795. Compare that to the top of the line Packard Twelve which started at $5,900.

The moving downmarket saved Packard in the short run, but many, if not most, automotive historians think it played a significant role in the eventual demise of the company as it was not able (or not willing) to re-focus on higher-margin luxury makes after World War II. The past cannot be altered, but playing “What If?” is part of human nature.

As always, I welcome thoughtful comments and feedback. Thanks.