No good deed goes unpunished…the windshield in my wonderful wife’s Corvette needed to be replaced, a quite common occurrence in Arizona. The appointment for the Safelite tech was yesterday.

I decided to observe most of the work (my wife had a physical therapy appointment) and even ended up helping a little bit. When the tech, who couldn’t have been older than 25 or 27, put on a sun hat I should have taken a clue. Of course, I am now sunburned on my scalp (thanks a lot, thinning hair), forehead and nose. The feeling of having your entire scalp throb is not exactly pleasant.

I don’t remember the exact number, but our next-door neighbor told my wonderful wife that they have had their windshield(s) replaced multiple times. Even though we have been living in Arizona just 17 months today, this is already our second experience with a broken windshield, the first having been with a rental car during our trip to the Mecum auction in March, 2020.

I am sure I didn’t have my windshield replaced more than twice during my decades in the mid-Atlantic. One of those times is actually amusing. I was in my mid-20s and was driving my car with my then girlfriend accompanying me. She hated wearing seatbelts and only wore one because I insisted. The entire time she was in the car she would hold the seatbelt away from her and would often put her feet up on the dashboard.

Well, during this drive I decided to pinch her butt. That must have surprised/frightened her because she shrieked and her foot hit the windshield with such force that it cracked. Obviously, once the insurance company realized the crack was on the inside they would not cover the cost of the replacement. No good deed goes unpunished?

I had a weird dream this morning. (What else is new?!) I was at a large gathering although I didn’t seem to know anyone there. I vaguely recall that some of the attendees were supposed to be famous, but those details are lost to dreamland. The venue was a very large house with many floors; I remember climbing four flights of stairs at one point. If you’re from Baltimore like I am, imagine a large home in Roland Park/Guilford on steroids.

All of a sudden everyone is in a hurry to leave. As I try to depart I notice several very cute puppies. I then notice that all of them have peed on the floor and realize I better watch my step.

I am reminded of something Norm Van Brocklin said on the sidelines as recorded by NFL Films when he was a coach. Commenting about a player Van Brocklin remarked, “The gears haven’t meshed in that guy’s head for a long time.” That describes me to a tee.

Perhaps you sense my reluctance to actually begin the “Threes And Sevens” series chronicling years in the US auto industry that ended with “3” or “7.” I still think it’s a good idea, but once I start I will be committed (maybe I should be) to finishing. That commitment is a bit daunting to me, at present, although I’m not sure why.

Speaking of cars, this one crossed the block yesterday at the Barrett-Jackson auction in Palm Beach, Florida. 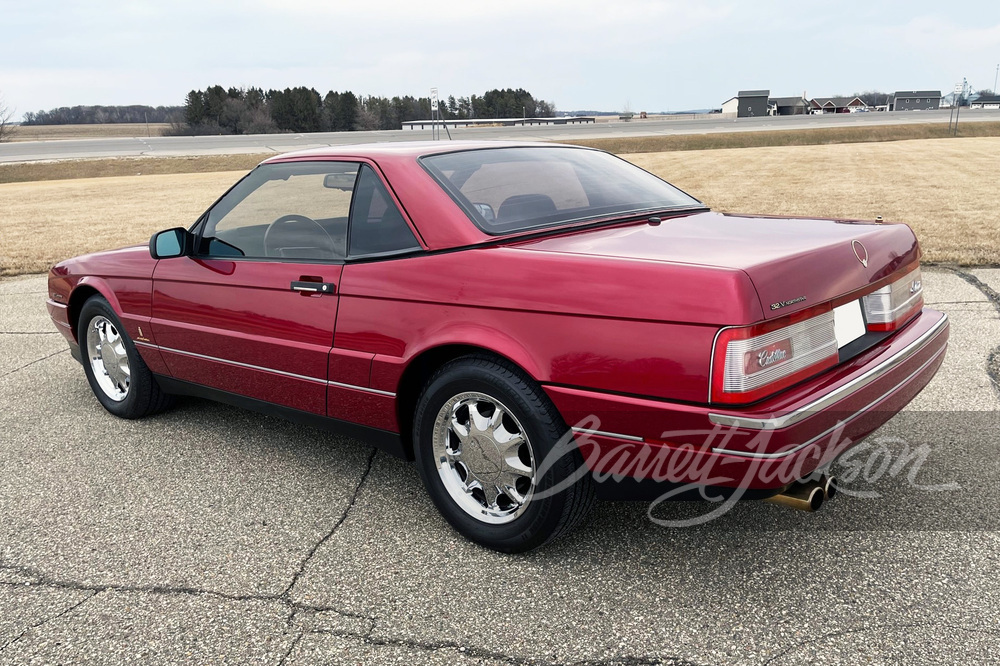 In case you don’t know, or even if you do, this is a 1993 Cadillac Allante. You may recall a beautiful example of the same car offered at the Mecum auction here in Arizona last month. That car was bid to $26,000, but didn’t sell.

All or virtually all of the vehicles at Barrett-Jackson auctions are sold at no reserve. This red Allante sold for…$11,000 all in.

I don’t HAVE to buy another car now, but I sure have an itch to do so. How much itching can I take before I have to scratch?