First, a link to this piece titled “The hypocrisy of the AMA…”

“E/e” is the most commonly used letter in the English alphabet. (The rest of the top five, in order: A, R, I, O.) My first and last name have a total of four of them.

That being said, surprisingly few car makes have begun with the letter “E.” That is true even given the 12 different car companies that have been named Eagle.

The scarcity of candidates made this a tough pick. Actually, as I am writing this I am still not quite 100% sure what make will be featured. In the end, though, I think Edsel is the right pick.

Despite being “[t]he butt of countless jokes and the origin of a new word for failure” (The Beaulieu Encyclopedia Of The Automobile), the failure of the Edsel makes it one of the most significant cars of the 20th century, in my opinion. Ford Motor Company spent many millions of dollars and years of effort in conceiving and marketing the car–in an attempt to fill a perceived gap in the Ford product line relative to General Motors–and yet it failed utterly. The idea for the Edsel actually began in 1948 (although the name for the make wasn’t picked until 1956), but the Korean War ended planning for its duration. In late 1954, planning resumed and the car was introduced in September of 1957 and billed as “The Newest Thing On Wheels.”

Once again, from Beaulieu:

“At first the new car was to be all new, with its own engines and body shells, but Ford engineers soon found that this would be too expensive, so existing body shells were used: Ford in the lower-priced Ranger and Pacer models, Mercury [remember them?–my note] for the more expensive Corsair and Citation.”

The engines were not quite new in that they were of similar design to those used in Ford and Mercury cars, but at first Edsel engines had displacements that were unique to the make. (Actually, in the well-known FE engine line “FE” originally stood for Ford-Edsel.) As Beaulieu notes, given the bodies and engines were similar to Ford/Mercury, management felt Edsels needed something distinctive. Of course, this is what the cars were given: 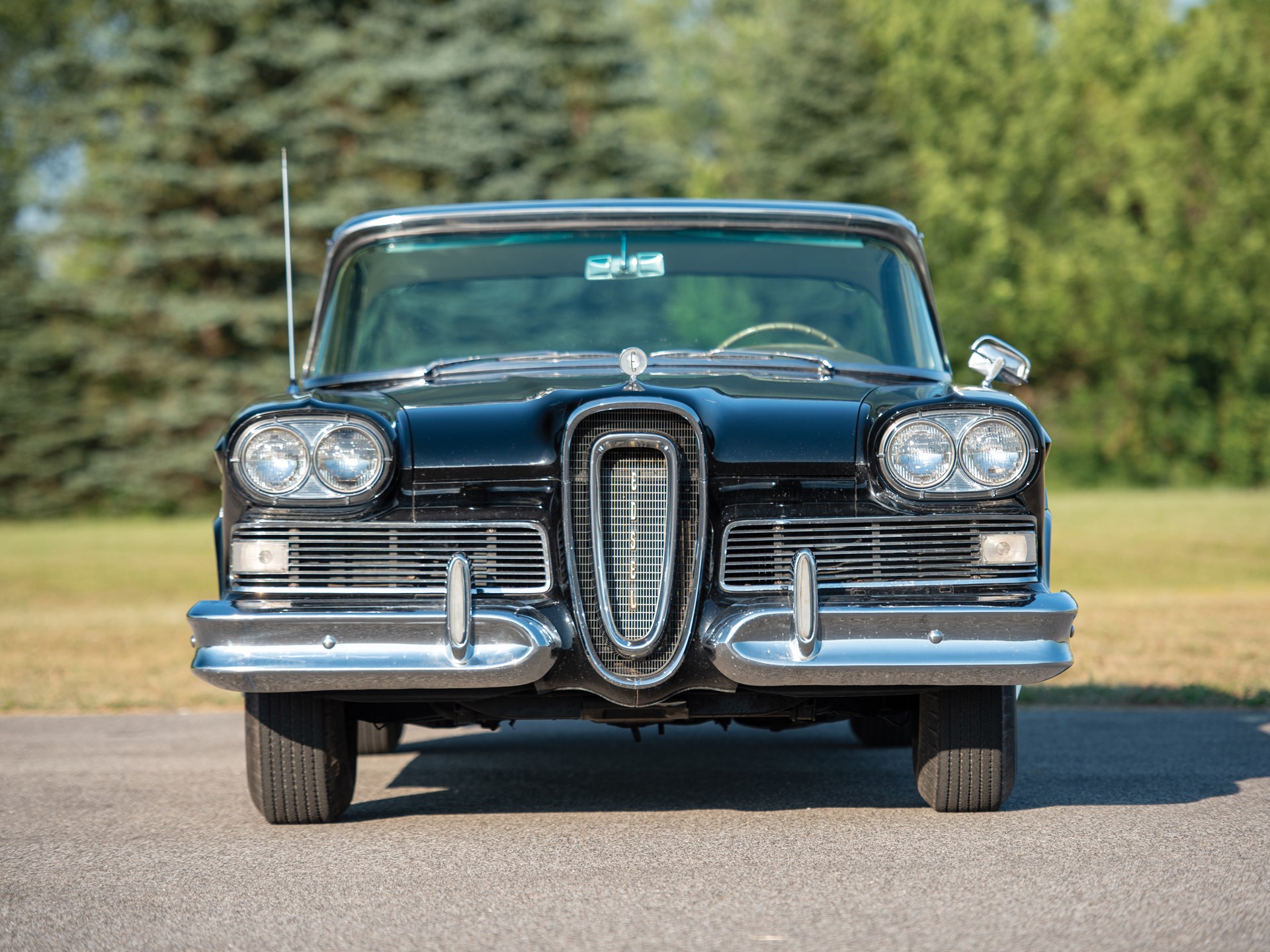 The “Horse Collar” grille, shown here on this 1958 Citation, was certainly distinctive. Not to be off-color, but many have suggested that this ornamentation is too reminiscent of the most intimate part of a woman’s anatomy, which certainly was a non-starter in the 1950s.

In addition, all Edsels were squeezed into production at Ford and Mercury plants. From Wikipedia:

“Workers assembling Fords and Mercurys often found the task of assembling the occasional Edsel that moved down the line burdensome, because it required them to change tools and parts bins, then switch back to resume assembling Fords or Mercurys after completing assembly on Edsels. The workers were also expected to accommodate Edsel assembly with no adjustment in their hourly quota of Ford and Mercury production. Consequently, the desired quality control of the different Edsel models proved difficult to achieve, even when the Fords and Mercurys were satisfactorily assembled on the same lines. Many Edsels actually left the assembly lines unfinished.”

Between the grille, quality issues and the sharp recession of 1957-58, the Edsel was doomed and was discontinued after just three model years. Well, actually two and change as the 1960 Edsels were announced in October, 1959 only to have Ford announce the end of the Edsel a month later.

R.E. Krafve, first General Manager of the Edsel Division of Ford Motor Company, predicted sales of 200,000 for the first model year, 1958. Actual sales were only about 63,000 and subsequent re-styling to “tone down” the car proved ineffective in stimulating interest in the Edsel. Model year 1959 sales were only 45,000. Fewer than 3,000 Edsels were built for 1960, leaving total Edsel production at about 111,000.

I know the make has a following today although some might describe it as a cult following. The figure often cited is that Ford Motor Company lost $250 million on the Edsel, which is roughly $2.4 billion in 2021 dollars. Leaving the last word to Beaulieu, “…some say that it was the right car at the wrong time, others that it was the wrong car for any time. A more charitable summing up was that its aim was right but the target moved.”