Life goes on; sometimes it doesn’t.

An example of how much my life has changed: my wonderful wife and I watched most of the first half of last night’s Packers-Cardinals game. (Go Pack Go!) At halftime, I changed the channel and then started streaming an episode of The Incredible Dr. Pol. I forgot all about the game and we both fell asleep somewhere near the end of the episode. I didn’t learn until this morning that Green Bay hung on to win its seventh straight game and hand the Cardinals their first loss of the season.

If you had told the 30-year old me that I had forgotten to watch the second half of a football game involving one of my “favorite” teams and, instead, streamed a show about a veterinarian, I would have coughed up a lung laughing. (Never mind, of course, that streaming TV didn’t exist when I was 30.)

Of course, if you had told the 30-year old me that I would be diagnosed with bone spurs in addition to the bunions on both feet I might have used some choice language to convey that you’re crazy. Nevertheless, that is the diagnosis I received yesterday from the podiatrist.

In response to the news about Mecum Auctions’ broadcasts moving to Motor Trend starting in January, I texted Scott Hoke and John Kraman and cautiously asked them if that was welcome news. Hey, I didn’t know if all of the crew would be making the move.

Both responded enthusiastically, which was great to read. They both also offered condolences, which was appreciated, on the death of my wonderful wife’s mother.

I’m just happy I will be able to continue watching the auctions. If Scott is reading this, maybe he can chime in on whether or not the telecasts started in 2008 on what was then called HD Theater, which is now–in a roundabout way–Motor Trend. For Mark in Canada, if Discovery Velocity is still being shown you may now be able to watch the Mecum Auctions.

As many of you may know, Fack Fucebook has changed the name of its parent company to Meta Networks. Noted tech investor/commentator Roger McNamee composed this limerick “in honor” of the occasion:

“There was once a hacker named Zuck

Who screwed half the world for a buck

So the name changed to Meta

But the name and the product still suck.”

Once again, a turd by any other name still stinks.

OK, to the “D” car in Cars A To Z. By the way, I think that most of my first posts after any kind of break, even just one day, are longer than average.

Frederick and August Duesenberg (Fred and Augie) could build some cars. (I listed Fred first because he was the older brother.) What they couldn’t do well was to run a business. Perhaps it was an inevitable manifestation of the rapid growth of the automobile industry at that time that their road cars ceased to be innovative by the mid-1920s.

Errett Lobban Cord, successful businessman and President/CEO of the Auburn Automobile Company, bought Duesenberg. Most sources say the deal happened in 1925, but The Beaulieu Encyclopedia Of The Automobile cites the year as 1926.

Anyway…inspired by Ettore Bugatti, Cord wanted to design and to build a new car that would outclass and outperform any other car made anywhere in the world and felt the Duesenberg brothers were the people to do it. In 1928, the Duesenberg Model J, designed primarily by Fred, debuted. While the company had been producing road cars, primarily the Model A, since 1921, it was the Model J for which the company is most remembered. A couple of relevant photos, OK the bottom photo is an SSJ, so sue me: 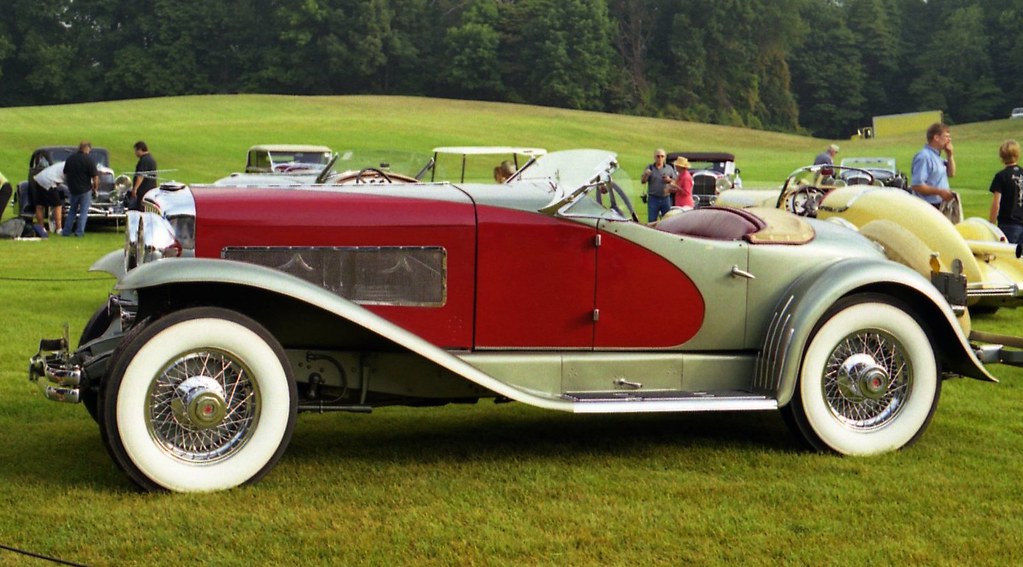 Whether or not the 420 cubic-inch straight-eight engine could really produce 265 HP is a matter of some debate, but not completely relevant, in my opinion. The highest output for a 1929 Cadillac was 90 HP and for the same year Packard’s highest output was 130. If the Duesenberg motor really produced 225 or 240 HP, it was still way ahead of everyone else at the time.

Between EL Cord’s stock “machinations” and the Great Depression, his automobile empire, including Duesenberg, collapsed in 1937 and he sold the company to the Aviation Corporation. Don’t feel bad for EL Cord; he later made millions in real estate and was an early Radio/TV “magnate.”

Of course, Duesenberg is a legendary make today. Although no US company builds a no-holds-barred luxury car at present, that hasn’t always been the case. A fully completed Model J, including coachwork which came from an outside coachbuilder and not Duesenberg–they only built a drivable chassis, could cost as much as $20,000-$25,000. The most expensive Cadillac in 1930 was less than $10,000 and an eight-cylinder Caddy could be purchased for under $4,000. In 1931, it was possible to buy a Chevrolet for $445.

I will opine for the nth plus nth time that I think an American-made super-luxury car would be successful today. I wish I were in a position to make that happen.