At the recently completed Mecum auction in Monterey, California, auctioneer extraordinaire Jimmy Landis said, “Ask The Man Who Owns One” while making the call when a Packard was on the auction block. Seemingly, very few people understood the reference.

“Ask The Man Who Owns One” was Packard’s ad slogan for decades. On this day in 1956, Studebaker-Packard President Harold Churchill announced that the Packard make would continue for 1957, but as a badge-engineered Studebaker (he didn’t use that phrase) built on the Studebaker President Classic chassis. Of course, that announcement was very late as at that time new model year cars were often first available for sale by September of the previous calendar year. From the Studebaker Drivers Club site, a picture of a 1957 Packard Town Sedan: 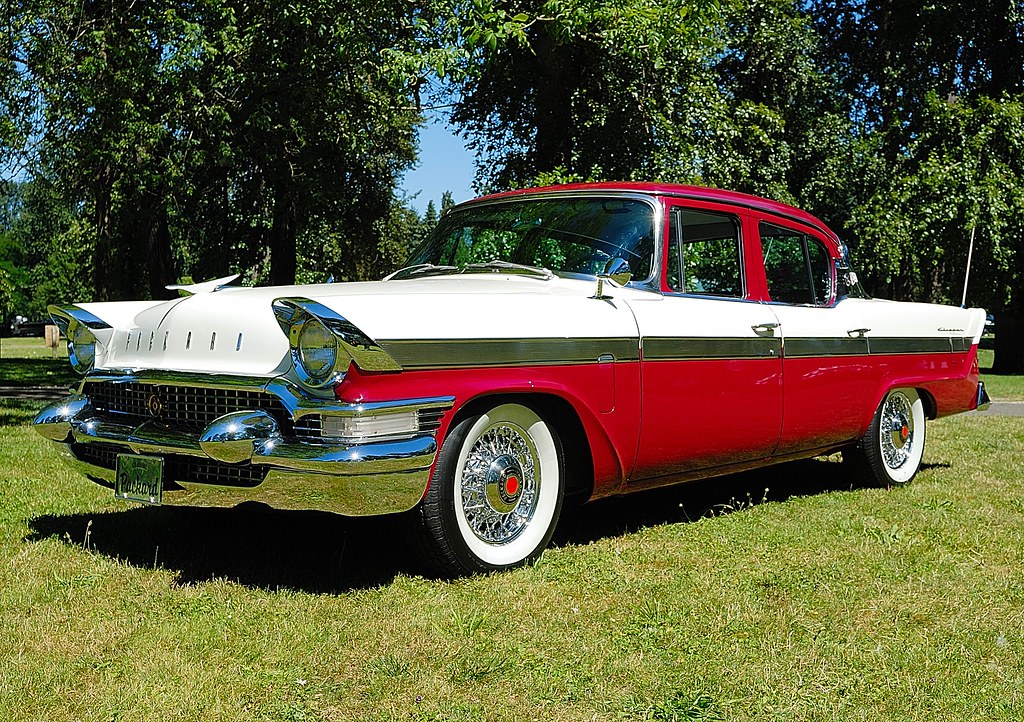 Packard made history in the 1957 model year as the first (and only?) make to supply all of its cars with supercharged engines. All 4,809 Packards produced in 1957 were equipped with a supercharged Studebaker 289 cubic-inch V-8 rated at 275 HP/333 LB-FT of torque.

In recent months I have not written about Packard and other defunct American makes as much as I had previously. They don’t tug on my heartstrings quite as much as they used to, but I would still like to own a car made by such a make.

Speaking of Monterey automobile auctions…this Hemmings piece summarizes the results of all of the auctions held during the 2021 Monterey Car Week. The piece begins:

“In simple terms, the 2021 Monterey Car Week auctions were pretty big. The take from the five auctions held on the peninsula during Monterey Car Week totaled $321 million with a sell-through rate of 87 percent. At the “catalog” auctions – RM Sotheby’s, Gooding & Company, and Bonham’s – the overall sell-through rate was 90 percent. The sum total is a big increase from the $245.5M in 2019 (there were no auctions in 2020), but below the 2018 tally of $370M. Perhaps most interesting, though, is the average sale price of $310,295, including a good number of motorcycles and memorabilia at Mecum.”

Speaking of Mecum, the company proclaimed the Monterey auction to be the “most successful daytime auction to date.” It reported a sell-through rate of 80% (Hemmings reported 77%) and total sales exceeding $57 million. The highest price for a car that sold was for this one:

This 2014 Ferrari LaFerrari sold for $3.41 million all in. I don’t like dealing in hypotheticals, but if I could truly afford to buy a car like this, I would probably be tempted to do so. What about you?

3 thoughts on “Ask The Man Who Owns One”