First…about 12 hours ago I wasn’t sure I would be in a position to post today. On a scale of 1 to 10, my headache was a 10, encompassing my head and my neck. Ibuprofen, acetaminophen, cold, heat…nothing seemed to work.

I think these really bad headaches are part of a bad feedback loop, where physiological and psychological stressors feed each other. Eventually though (~3 hours), the headache went away and I was able to sleep. This morning I feel fine.

I doubt many of you are interested in my medical issues, but they are a large part of my life and this is my blog.

In my opinion, the definitive article on turbocharging (and supercharging) is this one from Ate Up With Motor. Very briefly, a turbocharger is an air compressor that “feeds” the intake system and is powered by exhaust gases. Compression forces the air-fuel mixture into the cylinders at a pressure above atmospheric, giving them more mixture to burn and creating more power.

Although the turbocharger was a Swiss/German invention whose first application was in aircraft engines, the first application in passenger cars was in the Chevrolet Corvair and Oldsmobile F-85 Jetfire in the early 1960s. As recently as 2010, only 5% of new vehicles sold in the US were turbocharged. By 2017, though, that proportion had grown to 28%.

As I have written before (apparently, my “favorite” phrase to write in this blog), while I would never try to impose my beliefs on everyone else, I think in all vehicles sold with internal combustion engines those engines should be turbocharged. Such engines can have smaller displacement, meaning better fuel economy, without sacrificing power. Turbocharged engines are also more thermally efficient than naturally aspirated motors and produce lower emissions, in part, of course, because they burn less fuel.

A 1963 Oldsmobile F-85 Jetfire was offered at the Mecum auction in Indianapolis in 2017. Here is a picture of that car: 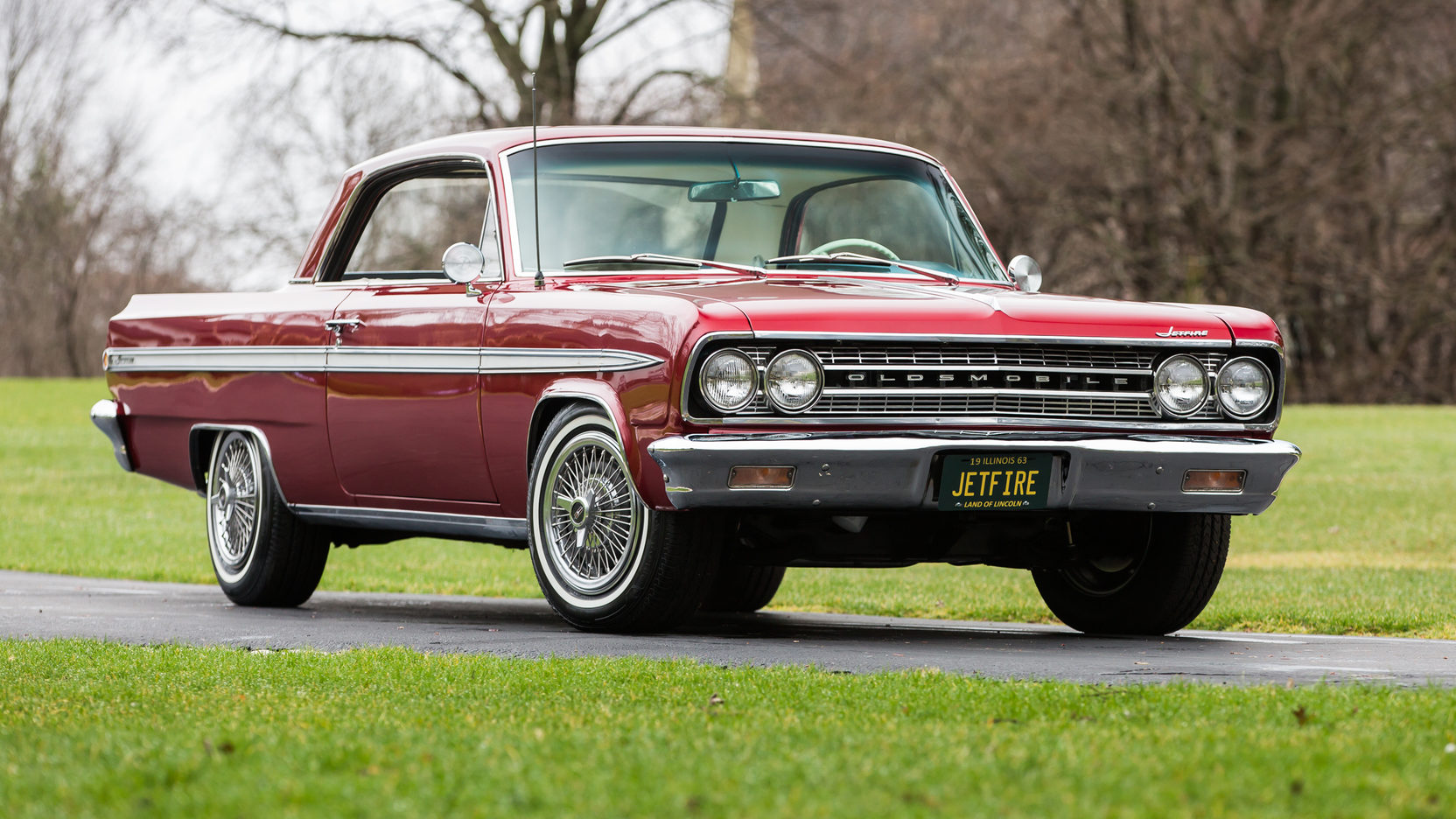 Unfortunately for the Corvair and F-85, turbocharging technology was not advanced enough at the time for these cars to be practical. Instead of an intercooler that cooled the compressed charge (compressing a gas increases its heat, a hot charge is not good for engine performance), to inhibit premature detonation the Jetfire used a simple water-methanol mixture they dubbed Turbo-Rocket Fluid.

Oldsmobile offered a turbocharged engine (in its 215 cubic-inch aluminum V-8, no less) only in 1962 and 1963 while Chevrolet offered the option in the Corvair (for its flat-six mounted in the rear) from 1962 through 1966, inclusive. Jetfire sales actually increased 55% in 1963 compared to 1962 (in part because of its introduction late in the 1962 model year), but total sales for the two years were still fewer than 10,000. Total Oldsmobile sales for those two years were about 900,000 vehicles.

I am not an engineering geek, but the combination of turbocharging in a small-displacement V-8 really interests me. Of course, in 10-20 years internal combustion engines will be on the way out. What, if anything, will companies do to differentiate the drivetrains of various models?