“Ask The Man Who Owns One”

That was Packard’s famous advertising slogan, which was used for decades. I don’t know why this Hagerty article from December showed up in my email last week, but it’s titled, “If you want to buy Packard, ask the man who owns it.” The piece is about Roy Gullickson, who purchased the rights to the Packard name in 1992 and then spent many years trying to revive the brand, but only succeeded in building one prototype. Here is a picture of said prototype: 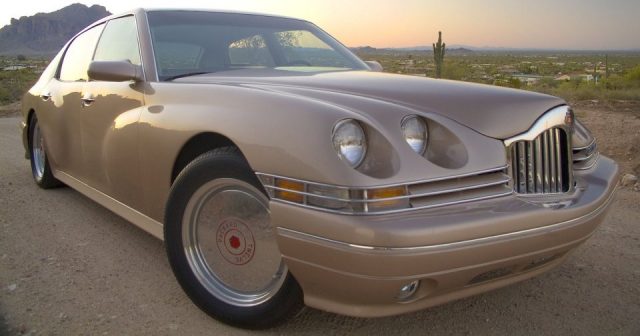 It’s difficult to show a flattering perspective of this car, in my opinion. From the Hagerty article,

“…[A]s impressive as the Packard Twelve prototype is from an engineering standpoint (certainly up to historic Packard standards) it could not be considered widely attractive. Trying to evoke the 1940s Clipper makes it look a bit dumpy awkward. To be frank, Dick Teague did a much better job evoking the traditional Packard grille in the Predictor than Gullickson’s team did with the Twelve.”

I don’t know if a sale has happened since December, but Gullickson put the “assets” of the company on sale asking $1.5 million. As much as I have lamented the demise of many American automobile makes in this blog, especially the independent ones, I don’t think any of them could be successfully revived. Very few people under the age of 40 have heard of Packard or Studebaker or probably even Oldsmobile, for that matter. The names simply do not resonate, anymore.

What do you think?

Kerbeck Corvette near Atlantic City, New Jersey has been the largest Corvette dealer in the country for years. (No, the picture wasn’t taken at Kerbeck.) Therefore, it came as quite a shock to read that Kerbeck has agreed to sell three of its dealerships, including its Corvette store, to Ciocca Dealerships.

My wonderful wife bought her first Corvette from Kerbeck in 2015. The salesman could not have been more pleasant, nor less pushy. Supposedly, virtually the entire staff of Kerbeck Corvette will stay under the new ownership. I probably will always think of that dealer as Kerbeck Corvette, not that we are ever going to buy a car from them again.

Perhaps in a sign of the times, the last three Corvettes we have purchased were not from dealers in the state in which we were living. I never saw my Z06 in person before I bought it. Welcome to the 21st century, I guess.