On the way back from a breakfast run to McDonald’s yesterday, the song “A Horse With No Name” by America was played on the terrestrial radio station we listen to since we let the Sirius/XM subscription lapse in the Cadillac. I was transfixed and transported back to 1972, the year the song was released. I guess I had forgotten how much I liked the song.

Those with nothing better to do have gone out of their way to criticize the lyrics as being both simplistic and drug-induced. While the band members deny the latter accusation, the lyrics are a bit strange in part, I admit. Still, “A Horse With No Name” was one of the songs that brought me back to music. (Actually, some US radio stations would not play the song because “Horse” is/was a slang term for heroin.)

Even spending 89 or 99 cents for a 45 was not easy for me in those days. However, I waited so long to buy “A Horse With No Name” that it was no longer available in local record stores when I finally decided to buy it. America’s next 45/single, “I Need You,” had already been released. He who hesitates is lost? I wound up buying their first album since “A Horse With No Name” was on it. I’m pretty sure I had to ask my father for a couple of dollars to augment my meager assets so I could buy the album. It was one of the first five albums I ever purchased.

Even though I have the song on a CD somewhere, I spent the $1.29 to buy it from iTunes this morning. After I finished typing the last sentence, I started playing the song on my iPhone. I have to admit to getting a little choked up while listening to it.

One other thing my wonderful wife and I did yesterday was to go shopping at an antique store for the first time in over a year. We wore masks the entire time in the store and, happily, can report that virtually everyone else was doing the same.

Yesterday’s experience was like many we’ve had. I like going to these places, but not as much as my wonderful wife. I usually become antsy and want to leave before she does. However, just before I went outside I found these: 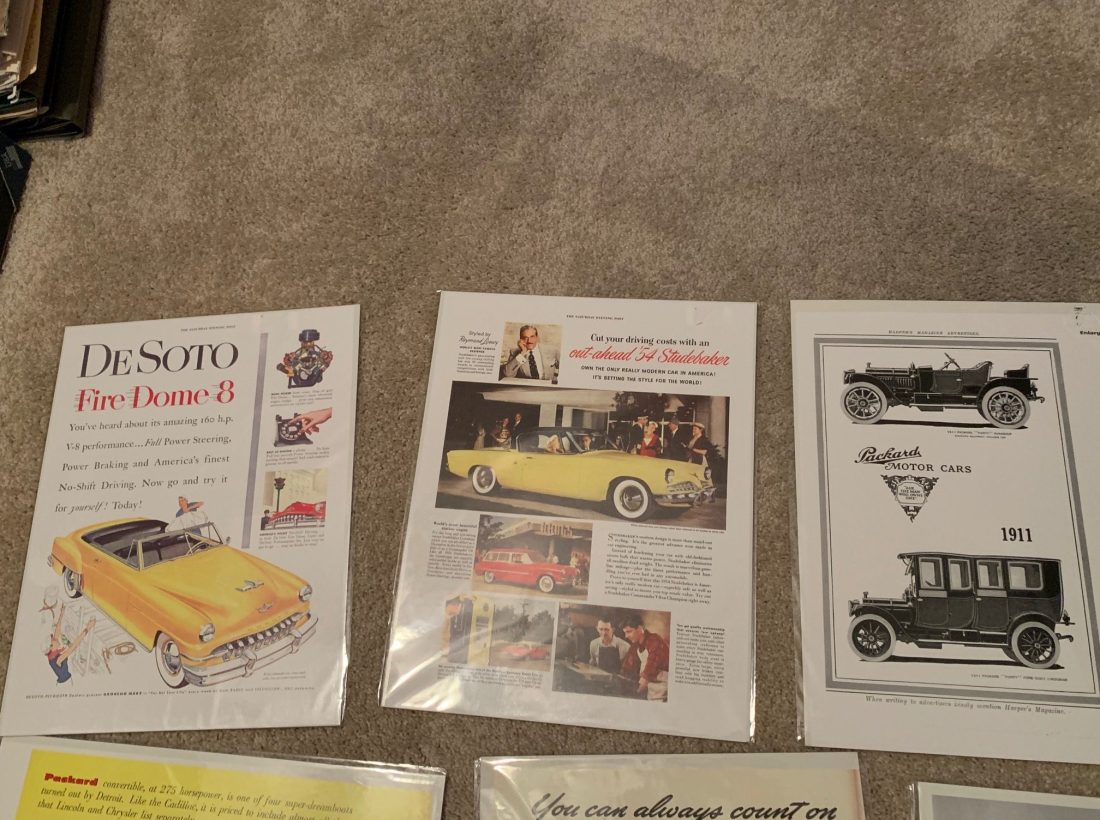 If I hadn’t already mentally prepared myself to leave, I probably would have purchased many more of these than I did. As is often the case, I wound up spending more in the store than my wonderful wife, even though these were sold for 20% off the listed price. The DeSoto ad showing the front of a 1942 model along with military equipment really makes me want one of those cars. The ad for the 1911 Packard does indeed show the famous slogan, “Ask The Man Who Owns One.”

We will return to that store and I will almost certainly buy more automobile ads. Who knows? I may even buy some for cars that are not defunct.

13 thoughts on “A Horse With No Name”