Most of you probably neither know nor care, but tonight is the first round of the 2021 NFL Draft. If I am to be honest, I have followed the draft less this year than in any other year in a long time. If it weren’t for the fact that ESPN’s “draft guru,” Mel Kiper, and I have been friends for almost 30 years, I probably would have stopped watching the draft years ago.

By virtue of their being an expansion team, the New Orleans Saints had the first pick in the 1967 draft. However, a week before the draft they traded the pick to the Baltimore Colts as part of a package for Baltimore backup quarterback Gary Cuozzo and guard Butch Allison. Cuozzo wasn’t even the Saints starting QB for the entire 1967 season, losing his job to Billy Kilmer.

The Colts selected Michigan State All-American defensive end Charles Aaron “Bubba” Smith with the first pick. He was one of four Spartans selected among the first eight picks. Smith was a good, not great, NFL player and probably became more famous in his post-football career as an actor. Of course, Smith’s football career was derailed by a serious injury in a pre-season game in 1972 and he filed suit against the NFL, two game officials and the Tampa Sports Authority (the game was held in Tampa) seeking damages. Eventually, Smith lost the suit. He played a total of nine seasons in the NFL, but was never the same after the injury.

I wanted to show a quality picture of Smith in a Baltimore Colts uniform, but it seems as though the rights to all of them are owned by Getty Images. I wish I still had the collection of large black and white photos of each Colts player my father gave me in 1969 or 1970. I could have taken a picture of Smith’s picture. As it is, here is a picture of Smith from Pinterest: 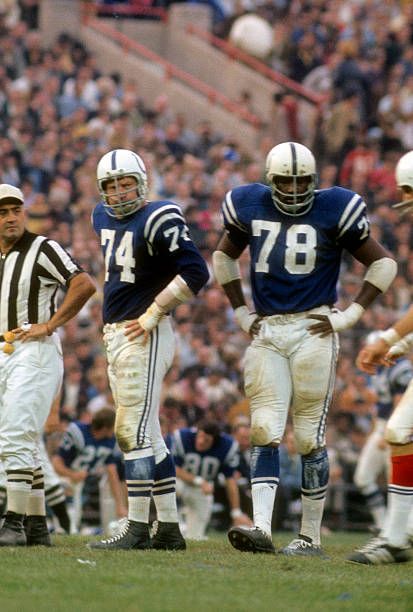 The first round of the NFL Draft has better television ratings than most MLB or NBA playoff games. An average of almost 16 million viewers watched the first round of last year’s draft. Over 4 million watched the third day of the draft, rounds 4-7. By comparison, Game 2 of the 2020 American League Championship Series, the competition that determined the AL participant in the World Series, had fewer than 2 million viewers. Some games in the NBA conference championship series, which determined the participants in the NBA championship, had fewer than 4 million viewers. Yes, last year’s numbers were distorted by the damn virus, but 16 million viewers vs. 2 million or 4 million is quite a stark contrast.

Back to the 1967 draft…four eventual Hall of Famers were selected in the first round: Bob Griese, Floyd Little, Alan Page and Gene Upshaw. In all, 10 Hall of Famers were picked in the 1967 draft. A total tangent: one of those players, Willie Lanier, selected by Kansas City in the second round from Morgan State in Baltimore, was friends with my 7th-grade homeroom and music teacher, Mrs. Dorsey.

I hope you’ve enjoyed today’s Throwback Thursday edition, even if you’re not much of a football fan.