First…I must acknowledge the 126th anniversary of the birth of Babe Ruth. Although I am not a baseball fan or follower in any way, shape or form, any more, growing up as a baseball fanatic in the city of his birth I was a huge fan of his achievements. From, of all places, The Hollywood Reporter, a picture of The Babe: 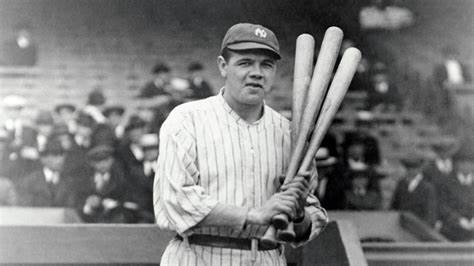 In On The Wing Wednesday I stumbled onto a comparison of Cadillac and Packard sales. (I readily admit that Cadillac vs Packard is a less “sexy” title than Ford vs Ferrari.) Ever since then, I have wanted to make a table showing the sales/production of both makes from after World War II to Packard’s last year as a real car company, 1956. Here it is:

As the title of the table reads, this is calendar year production and not model year. I used calendar year to put Packard’s decline into sharper focus. Using calendar year also shows a sharp break from when Packard was competitive with Cadillac to when they became less so. Instead of using a compendium book, these figures came from Cadillac at 100: Legacy Of Leadership and Packard: A History Of The Motor Car And The Company.

Note that in the first four post-war years in total, Packard outsold Cadillac by 27.9% AND outsold Cadillac for awhile even after the tail fins were introduced on the latter. The next four years Cadillac outsold Packard by 41.4%. Of course, in those last three years there is no comparison.

Less than a decade before its demise, Packard was competitive, at least based on these sales figures. Whether the seeds for its eventual destruction had already been sown is a matter for Packard “experts” to debate. Despite all I have read and written about Packard, I don’t think I am qualified to give an authoritative opinion on why Packard failed.

Regular readers know I am a fan of both makes. This picture of a 1948 Cadillac was the spark that got me blogging about cars almost every day.

I have written about Cadillac concept cars like the Elmiraj, the 1967 Cadillac Eldorado was part of Ultimate Garage 2.0, and my wonderful wife and I just purchased a 2015 Cadillac ATS.

Sadly, we can’t buy a relatively new Packard. The 1956 Caribbean convertible was also part of Ultimate Garage 2.0 and I have often written about Packard and other defunct American makes, although not so much in recent months.

Cadillac vs Packard, too bad that’s not a current battle in the automotive marketplace.

9 thoughts on “Cadillac vs Packard”