This CNBC article reports on the “wave” of businesses relocating to Texas. Of course, Governor Greg Abbott, who is the focus of the piece, is hardly an objective observer. Still, quoting Governor Abbott, “We’re working across the board because the times of Covid have exposed a lot. They’ve exposed… that you really don’t have to be in Manhattan, for example, in order to be involved in the trading business or the investment business…Cost of business means a lot. No income tax means a lot, but also the freedom to operate without the heavy hand of regulation means a lot…”

Again, the inability/unwillingness of many people to understand that taxes and regulations have real costs that are imposed on everyone, business person or not, is yet another manifestation of blind adherence to ideology. It is also frightening to me that so many people seem willing to give up their economic freedom to government, not realizing that could be the beginning of the end of freedom, period.

I believe that government exists to protect property rights, not to usurp them. An economy cannot thrive without well-defined and well-protected property rights. Arbitrary expropriation of those rights will NOT lead to the “general welfare” of a population.

My wonderful wife and I lived in Texas for almost eight years. We didn’t leave because we didn’t like living there; we left because I grew homesick and wanted to go back to the mid-Atlantic. Of course, I outgrew that homesickness. We didn’t have views like this in Texas, either:

At one of the few lights where I actually had to stop while on my way back from my enjoyable meeting with JS, I clicked on my car’s “Driver Information Center.” One of the displays is gas mileage over the last 50 miles with a “best” (whatever that is) and the average MPG. For the last 50 miles, my 700+ HP/700+ LB-FT Z06 had averaged 23.5 MPG.

Obviously, the owner/driver of such a car does not have gas mileage as a top priority, especially when that “supercar” is only driven 200-300 miles a month. Still, that 23.5 MPG is not shabby and demonstrates that in some contexts, the features that contribute to great performance (like aerodynamic styling) can also help gas mileage. Also, electronic fuel injection is not only far more reliable than carburetors, it also improves fuel economy (and emissions). OK, a picture:

Yes, I know I have to take pictures of our Vettes in our new venue. Hopefully, I will do that soon.

On this day in 2000 General Motors announced it would phase out the Oldsmobile make. All future model development was stopped and advertising and marketing expenditures were drastically reduced. Remember that this was almost a decade before the GM bankruptcy and reorganization that led to the end of Pontiac and Saturn. From my most valuable book, Encyclopedia of American Cars by the Auto Editors of Consumer Guide®,

“Ironically, Olds car sales finally turned up for 2001, the first year-to-year increase since 1994…As [Ronald] Zarella [then President of GM North America operations] told AutoWeek: ‘Our strategy with Olds was starting to work–we ended up with a lot of positive demographics. The problem is there just wasn’t enough of them…'”

“At first, GM planned to keep building existing Olds models ‘until the end of their current life cycles or as long as they remain economically viable.’ By September, 2001, however, the company announced ‘Oldsmobile production has remained unprofitable…’ The very last Oldsmobile, a black Alero, came off the line on Thursday, April 29, 2004. It was immediately sent to the R.E. Olds Transportation Museum in Lansing, the city where the story had begun 106 years earlier.”

Oldsmobile’s history as an innovator was most impressive and has been shared on this blog before. The company is, and will always remain, the only American automobile manufacturer to build cars in the 19th, 20th and 21st centuries. Although it is extremely unlikely we will do so, a small part of me wants to buy a car like this: 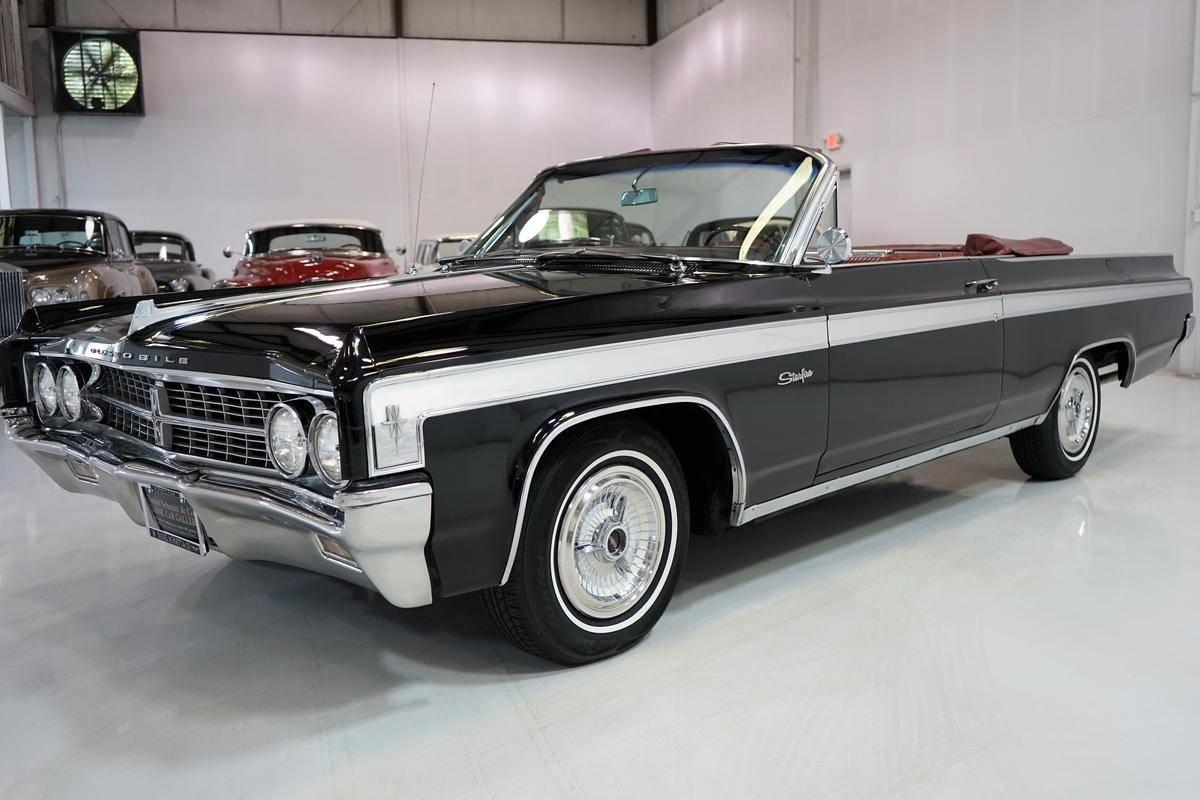 From Hemmings a picture of a 1963 Oldsmobile Starfire Convertible (obviously…) listed for sale with an asking price of $36,900. That would make a hell of a Grocery Car/Taxi/Corvette Companion.

Anyone want to share their thoughts about Oldsmobile? They would be appreciated.

10 thoughts on “Deep In The Heart Of Texas”