YOU have the primary responsibility to take care of your health. David Banner (not his real name) shared this story with me from his days as a physician.

“I had a patient who had a major heart attack and was in the ICU getting clot busting meds. When I got there, he had oxygen on and was eating a fried fish sandwich that he bullied his wife into bringing him, and berated the nurses who tried to get him to stop. He died on his couch nine months later.”

I suspect this is hardly atypical behavior. “Don’t you have some pill I can take so I can eat what I want, not exercise and still be healthy?” Magic is an illusion; it’s not real.

Even with the desire for “medical magic,” the latest published Gallup poll indicates that almost 4 in 10 Americans (39%) would not get vaccinated now if an FDA-approved vaccine for COVID-19 were available and free. Scarily, that number has increased since polling in late July when it was 34%.

America: Land Of The Free, Home Of The Ignorant?

Sort of related to the first point, but morphing into something silly…My wonderful wife and I received our annual flu shots on Saturday. It is the earliest we have ever received them.

The “Spooner-ism” part of my brain automatically hears “Shoo Flot” when someone says “Flu Shot.”  I hear “Flush Fladding” when a meteorologist says a risk of “Flash Flooding” exists somewhere in the country.

I’m not proud of my “Spooner-ism” brain, nor am I ashamed. It is what it is and I am what I am.

On this day in 1899 Newport, Rhode Island hosted the first parade of “horseless carriages” anywhere in the United States. From this article:

“The first parade of horseless carriages in the United States was preceded by a competition judging each vehicle on driving ability and decoration. Sixteen carriages, all decorated with flowers and flags, met at Belcourt Castle on September 7, 1899. An obstacle course was set up in the empty field next to Belcourt. Mr. Stuyvesant LeRoy won the award for best driving and Mrs. Hermann Oelrichs’s carriage was awarded the prize for best decoration.”

Newport has what I have heard is an excellent automobile museum, the Audrain. Even though my wonderful wife and I have been to Newport, we have not visited the museum. Why not? With my usual sense of luck and timing, the museum was closed to change exhibits the week we were there.

We did visit the Newport Auto Museum, which is actually in Portsmouth, Rhode Island. My wonderful wife and I began chatting with one of the docents. In less than five minutes, he offered me a job at the museum, apparently impressed with my automotive knowledge. I thanked him for the offer and told him we lived more than 300 miles away, making the commute kind of tough, especially for a job that didn’t pay. Here is a picture of one of the vehicles in their Fin Cars exhibit: 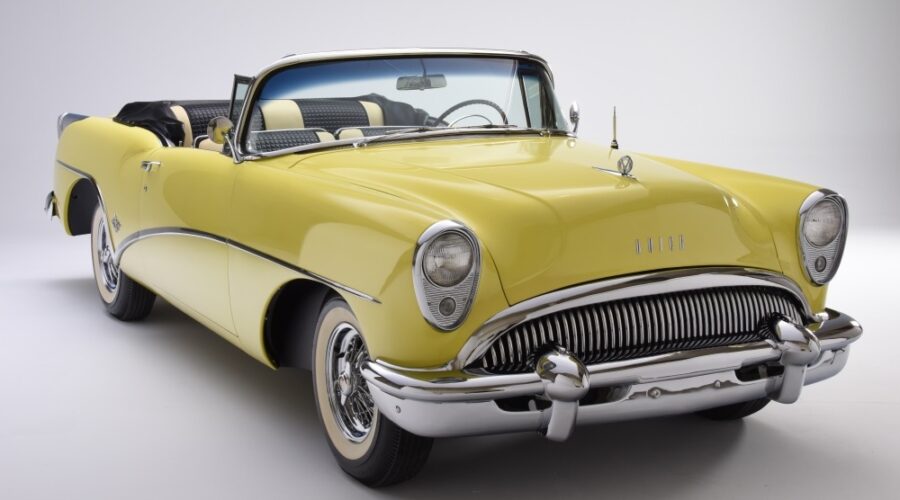 This is a 1954 Buick Skylark. I think these cars are just stunning. I doubt I will ever own a 1950s-vintage car, but I can hope.