While it is true that on this day in 1895 Charles Duryea was issued the first US patent for a gasoline-powered automobile, I wanted to write something more personal for this edition of Throwback Thursday.

At this time 50 years ago, I was in the last days as a fourth-grade student at Public School #241 in Baltimore. Our teacher was Mrs. S and both Dr. Zal and I had a crush on her. She lived in the same apartment complex as Dr. Zal and one day during the summer between fourth and fifth grade, after screwing up our courage, we decided to pay her a visit. She could not have been more gracious and friendly. I think we spent a half hour in her apartment talking about school.

Could something like that even happen today? (I’m not talking about the virus restrictions getting in the way.) One reason I remember that afternoon fondly is that it seems like a relic from a simpler time. As I have written before, I often pine for my childhood because it was a time when almost anything seemed possible. It also seems, from this distance, as if those were much simpler and more pleasant days.

Of course, my memory could be faulty. In his great book about Vince Lombardi, When Pride Still Mattered, David Maraniss writes about “the fallacy of the innocent past.” I simply could have been unaware of life’s travails at that age.

As I have previously revealed my birthday is in late March. While my annual physical was originally scheduled for early April, in deference to current circumstances I pushed it out until June 12, which is tomorrow, of course. Yesterday, I received a call from my doctor’s office basically begging me not to have the physical as scheduled, but to reschedule or to have a phone visit, instead. When I reminded the representative that I needed blood work, she said if I had signed up for the “Patient Portal” the doctor could have given me a slip to get the lab work done somewhere else. When I replied that still would require a visit to a lab outside my house and that I might as well see the doctor, after confirming I had a mask and gloves, she relented and confirmed my appointment.

I have to say that, while I realize her intentions were honorable, the call was most disturbing. Yes, the doctor’s office is in a building attached to this area’s primary hospital, but haven’t they established procedures to mitigate risk by now? Her call has also made me question whether or not I want to have the physical exam tomorrow.

While this is not an In Or Out? post, I want to show a car that might be a subject for the series at some later date. From Classic Cars, a picture of a 1958 Chevrolet Impala: 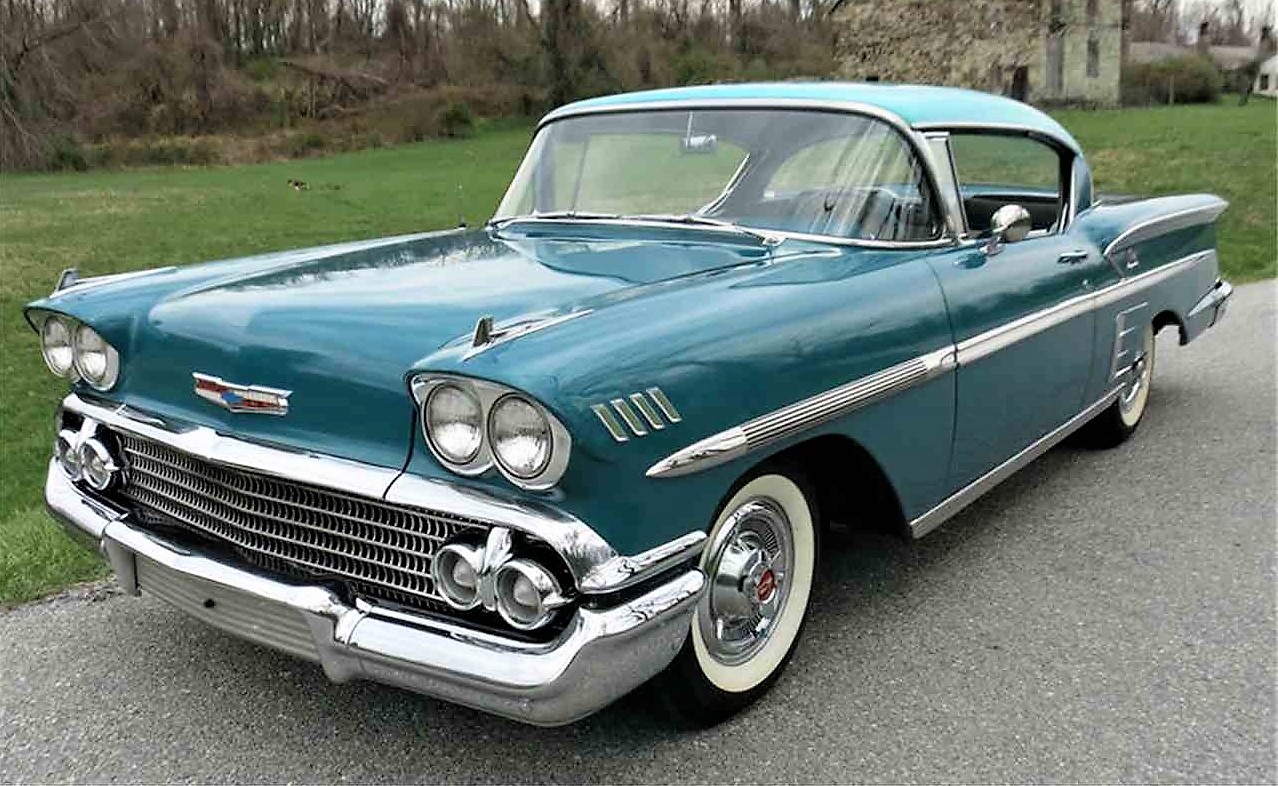 I am 95% certain that for this first year, the Impala was actually a sub-model of the Bel Air. In standard catalog of® American Cars, 1946-1975 by John Gunnell the Impala is listed under the Bel Air series for 1958, but then listed separately from 1959 on.

This was a one-year only body style. It’s hard to imagine something like that happening today, even though modern design systems actually make it easier to make changes.

Although now discontinued for the third and almost certainly final time, the Impala is one of the most significant models in US automotive history. At its introduction, one of its most distinctive features was the symmetrical triple taillights. From Fine Art America, a picture showing those lights:

I have seen this taillight treatment on several modified Corvettes, especially C2 models (1963-1967). The 1958 model year was also significant as it marked the introduction of the first version of the Chevrolet big-block engine, the W-Series. Originally displacing “just” 348 cubic inches, this engine family would be produced until 2009. (Please see the comments for clarification. Technically, the W-Block was not the same as the famous 396/427 big block of the 1960s. Still, this began Chevrolet’s production of big-block V8s that continued until 2009.) My sources are not in agreement on the highest output for this engine in its intro year. Using the more conservative source, for 1958 the 348 cubic-inch engine maxed out at 280 HP/355 LB-FT of torque.