I meant no disrespect by omitting any mention of the anniversary of D-Day yesterday. It can be argued that the ultimately successful invasion was the most important military operation in history. The thought of the holding on to power, even for just part of Europe, is terrifying. Of course, some would argue that the Soviets would have eventually defeated the , anyway. Having the Soviets control all or most of Europe would not have been a good outcome, either.

In my opinion, maintaining a healthy skepticism about belief systems is a good thing. Blindly adhering to any ideology is not.

I finally saw my first C8 Corvette in the wild yesterday. During the truncated gathering hosted by the local Corvette club one member brought his 2020 model. The “show” was shortened because the ownership of the shopping center where the group has been gathering every first Saturday from April through October for years decided they didn’t want us there yesterday, or ever again.

I don’t know if we were in violation of state guidelines, and not everyone was wearing a mask (which was disappointing to me), but to tell us we were never welcome back was rather harsh. Without further ado:

Of course, my wonderful wife and I saw multiple examples of the 2020 Corvette while at Bowling Green for the Corvette Caravan last August. Still, to see one in use, with plates, and not on the Corvette grounds was exciting. The car drew quite a crowd before we were ushered away. Oh, the building in the background is a now empty K-Mart. It’s not as if we were using parking spaces that might have been used by customers.

I still think my wonderful wife will buy a C8 convertible in the not too distant future. She didn’t argue very much with me yesterday when I told her my thoughts.

From Mac’s Motor City Garage comes an interesting piece about the 1965-66 Studebakers. Here are the first two paragraphs, although I recommend you read the entire article if you’re interested:

“By all rights, the end of the line for Studebaker as an automobile manufacturer should have arrived on December 20, 1963, when the sprawling plant in South Bend, Indiana was closed down for the final time. But through a curious twist in corporate decision making, Studebaker’s Canadian chief Gordon Grundy somehow persuaded the corporation to continue production at the company’s small but efficient Hamilton, Ontario plant, not far from Buffalo.”

“And so it came to pass that for Studebaker’s last two years in the business, it was a Canadian car maker. In the USA, these final Studebakers were sold under the slogan ‘The Common Sense Car.’ But north of the border, the tagline was ‘Canada’s Own Car.'”

I don’t really know how much Grundy had to do with the decision. By this time, the writing was on the wall and Studebaker’s place in the automobile business was going to disappear, much sooner rather than later. In order to avoid potential lawsuits from disgruntled Studebaker dealers and suppliers, producing in Canada was a convenient option. Still, the Canadian perspective is interesting.

It is known that Studebaker passed on multiple opportunities to be the US distributor for . What is probably not as well known is that they also tried to become North American (or perhaps just Canadian) distributors for Nissan/Datsun or Toyota. Grundy was convinced that the failure of the negotiations with Toyota was due to meddling by one of the partners in the main law firm involved, Richard Nixon. My understanding is that when Nissan/Datsun negotiations were being used as a backup, Toyota found out, became insulted and dropped out. Then Nissan/Datsun found out, became insulted and dropped out. (Maybe it’s the other way around. In any event, a deal with a Japanese automaker didn’t happen.)

From Bring A Trailer a picture of a 1966 Studebaker Daytona Sports Sedan: 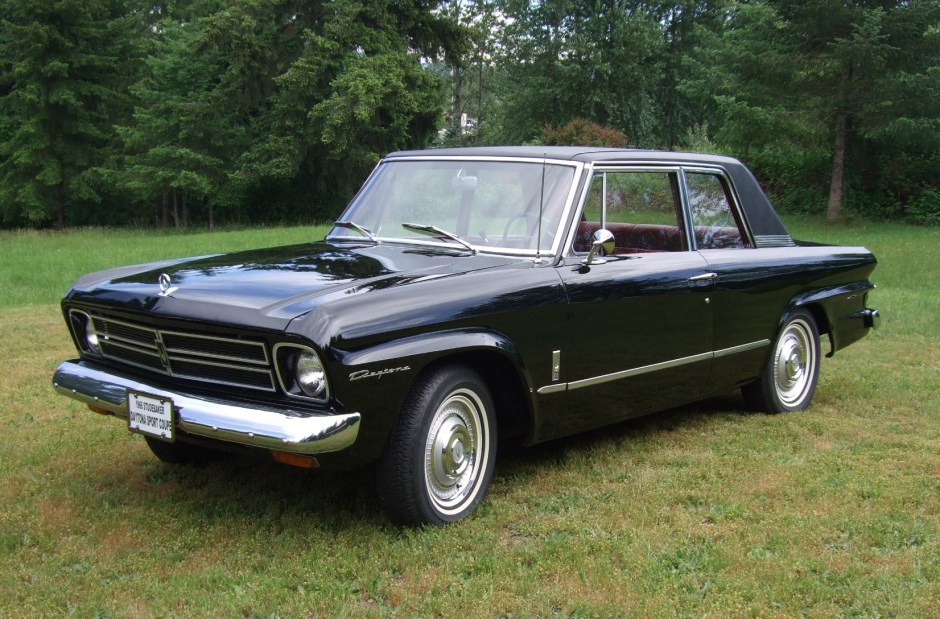 At just six letters the question “What If?” is one of the most powerful in the English language.