I am disappointed (unhappy?) that more concept cars don’t end up in production. I am also disappointed that on those few occasions when those cars are produced, they are often watered down versions of the original.

Although the saying “If you can dream it, then you can do it” is not always literally true–I mean, I can dream of flapping my arms and flying to the moon, but that’s not going to happen–trying to bring dreams to fruition can be among the most noble of human pursuits. In the last two decades or so, Cadillac has created a number of stunning concept vehicles, but except for the Evoq, which became the XLR, none of them have been brought into production and I think that’s a real shame.

The first car I will show is probably my favorite 1950s concept car. From Cars Of The Fabulous ’50s, the 1953 DeSoto Adventurer I:

Supposedly, Chrysler (DeSoto’s parent, in case you didn’t know or even if you did) almost put this car into production. However, the memory of the Airflow of the 1930s still lingered at Chrysler and that, coupled with corporate conservatism, doomed the car to concept-only status. (By the way, on a point only tangentially related to this: If you see a post with a broken link to a picture–in other words, if a reference to a photo exists but the picture isn’t displayed–please let me know here. Thanks.)

The January, 1954 issue of Popular Mechanics shows the Adventurer I and the Dodge Firearrow (to be shown shortly) and mentions that the bodies for both cars were built in Italy by Ghia. Chrysler Corporation had a partnership with Ghia in the 1950s that led to cars like the rare Chrysler Ghia ST Special and the Dual-Ghia. Supposedly, the Adventurer I was Virgil Exner’s favorite car and he lobbied hard for Chrysler to put the car into production. Since it was an early-1950s DeSoto, it was powered by DeSoto’s version of the first Chrysler hemi engine.

From oldconceptcars.com a picture of the 1954 Dodge Firearrow concept car:

This one is the Firearrow III and, as one would suspect given the suffix, was the third in a series of concept cars with that name. So, how many words is a picture worth, anyway? Again, it’s a shame this car was never produced. I don’t know if the car has been sold again, but the Firearrow III was sold by RM Auctions (now RM Sotheby’s) at its Phoenix auction in January, 2009 for $800,000. Remember what was happening in the world at that time.

This is a picture I took during the Elegance at Hershey in 2019 of the 1951 LeSabre concept car by General Motors. This was the “follow-up” to the first concept car, the famous Buick Y-Job of 1938. Like that car, the LeSabre was fully functional and like the Y-Job Harley Earl used it as his personal car after it was shown around the country.

The LeSabre was the first GM car to have the transmission mounted in the rear and was also the first application of the aluminum small-block V-8 that was later used in Buick, Oldsmobile and Pontiac cars of the early 1960s and then by Rover group (including Land Rover, Triumph, MG) until the early 1990s. By the way, the LeSabre engine was supercharged and could run on gasoline or methanol. According to Nick Williams of the Historical Vehicle Association, the LeSabre answered the question of what could be built without the restrictions of fuels, costs, or availability of materials.

Before you think I have forgotten the other “Big Three” company: 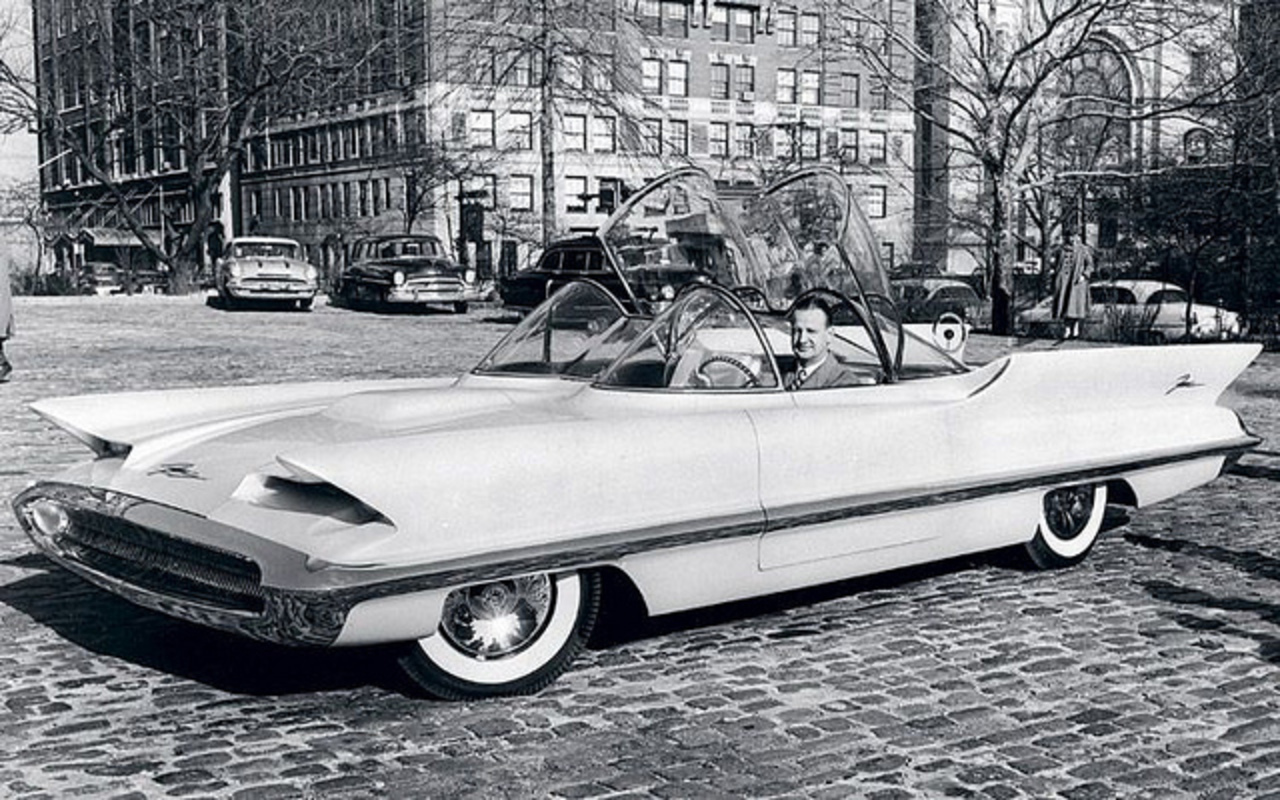 From topworldauto.com a picture of the 1955 Lincoln Futura show car. It was a success in that role and was later released as a model kit and a toy. In a less extreme form, the headlight and taillight treatments were used on production Lincolns like the Capri and Premiere in 1956 and 1957. Of course, the most famous use of the car was as the basis for the Batmobile in the Batman TV series. George Barris acquired the car for $1 and “other valuable consideration.” Obviously given the timing, the transformation to the Batmobile was not made until years after the Futura was shown. Oh…the original body was assembled by Ghia.

I remember a time when car shows were more about concept cars than about companies trying to show their current lineup in an attempt to get you to buy one. Sadly, I guess we’ll never return to those days.