I wish I had something of consequence or of profundity to write to observe this day, a Memorial Day unlike any other in memory. Just take note of the fact that about 1.5 million American soldiers have died while in service. Also remember that the men and women who serve today do so voluntarily.

While my wonderful wife and I cannot begin a home search in the desert in earnest (I thought you were looking in Arizona, where’s earnest? 🙂 ) until we sell our current home, we do look at listings and have unofficially retained the services of a realtor. Our latest setback has pushed the listing of our current home out into some unknown time.

My desired area consists of the southern part of one zip code and the northern part of an adjacent zip code. I am trying to find a home with some elevation in order to reduce the heat in the summer, even if by just 2°-4°. My wonderful wife is not as concerned with elevation and just wants to find a nice home with a pool. We both want at least a 3-car garage.

Currently, on any given search the set of homes that meet all of our criteria is very small and those searches are not as geographically specific as I would want. The realtor says that few homes are being offered for sale at present and the good ones usually go very quickly. Here is a picture from Realtor.com of the front of one of the few houses that meets our criteria: 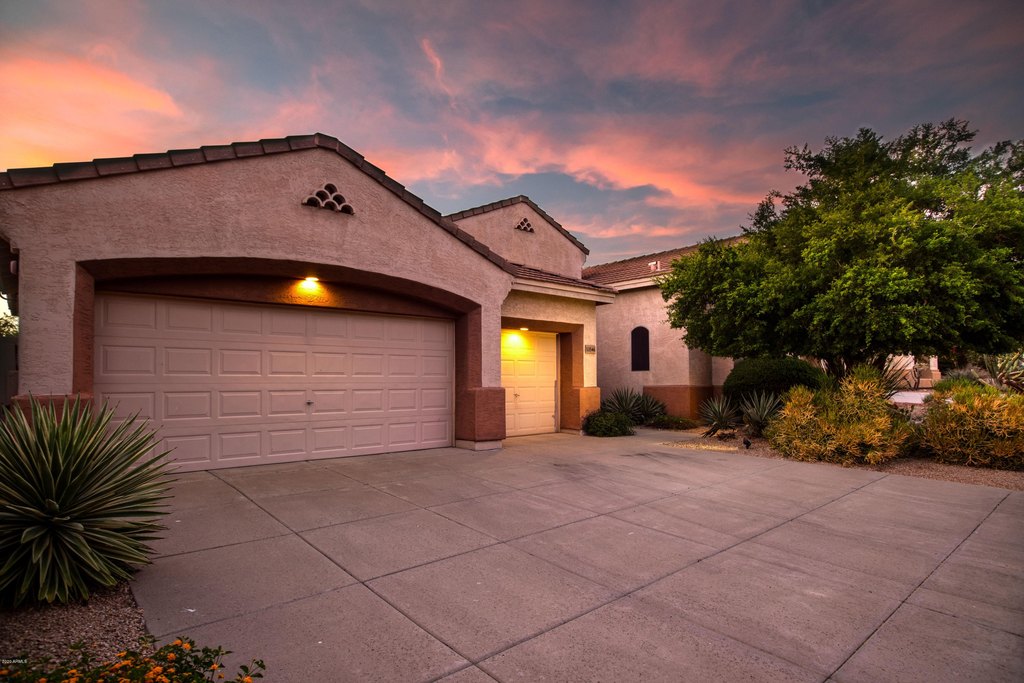 Of course I had to use a photo with one of those amazing Arizona sunsets. Technically, this house is not in the zone I have identified as desirable, but beggars can’t be choosers.

I really wish I could just snap my fingers and have this entire process done. Alas, the real world doesn’t work like that.

Now, this was a real Corvette fan…on this day in 1994 the ashes of 71-year old George Swanson were buried in the driver’s seat of his white 1984 Corvette, according to his wishes. Swanson had served in the US Army during World War II and later was a successful beer distributor. The burial took place weeks after his death because the cemetery where he had purchased enough plots for the car to fit had balked stating concerns about vandalism and offending others. Ultimately, Swanson’s wishes were carried out. His widow, Caroline, remarked, “George always said he lived a fabulous life, and he went out in a fabulous style. You have a lot of people saying they want to take it with them. He took it with him.”

From amosauto a picture of a white 1984 Corvette. This is not just another example from the first model year of the C4 Corvette, it was the 750,000th Corvette produced when it rolled off the assembly line at Bowling Green, Kentucky in October, 1983.