The coronavirus is blasting giant holes in the belief that society would be better off if we all lived in urban areas with high population densities. “Oh, we could walk everywhere or use public transportation and people would have to learn to live together” is the “foundation” of that preposterous notion.

From an NBER paper by Jeff Harris via The Grumpy Economist by John Cochrane:

“New York City’s multitentacled subway system was a major disseminator – if not the principal transmission vehicle – of coronavirus infection during the initial takeoff of the massive epidemic that became evident throughout the city during March 2020. The near shutoff of subway ridership in Manhattan – down by over 90 percent at the end of March – correlates strongly with the substantial increase in the doubling time of new cases in this borough. Maps of subway station turnstile entries, superimposed upon zip code-level maps of reported coronavirus incidence, are strongly consistent with subway-facilitated disease propagation. Local train lines appear to have a higher propensity to transmit infection than express lines. Reciprocal seeding of infection appears to be the best explanation for the emergence of a single hotspot in Midtown West in Manhattan. Bus hubs may have served as secondary transmission routes out to the periphery of the city…”

Even ignoring, for a moment, that high population density can lead to very high housing prices (especially given restrictive zoning and permitting practices), such density can rapidly propagate contagious pathogens. These facts are actually not lost on many millennials who are suddenly looking to move out of urban apartments and into single-family houses in less populated areas. This CNBC article is about that very phenomenon. From the article by Diana Olick:

“Home sales nearly ground to a halt at the end of March, as the coronavirus pandemic forced an economic shutdown that scuttled open houses and shattered consumer confidence. Now, demand appears to be coming back, especially for newly built homes…”

“…The drive to dense, urban areas by the millennial generation may reverse course, especially as some worry about second shelter-in-place orders after the economy reopens.”

“Staying at home is hard enough, but the smaller the home, the harder that is. Urban apartment dwellers often don’t have the luxuries of separate home offices, basements for exercise equipment, or back yards for private outdoor time.”

“As more companies become more comfortable with their employees working from home, attitudes toward longer commutes may also change — not to mention that gas prices are currently extremely low. Some workers may soon be able to come to the office one or two times a week, and some not at all.”

According to 365 Days of Motoring, on this day in 1956 the Ford Fairlane 500 Skyliner debuted at the New York Auto Show. The Skyliner is considered by most automotive historians to be the first mass-produced retractable hardtop convertible. It was certainly the only retractable hardtop in the world at that time. Remember that micro processors and very efficient electric motors did not exist then. The Skyliner had three roof drive motors driving four lift jacks, four door-lock motors, ten solenoids, four locking mechanisms for the roof and a total of 610 feet of wiring.

According to Encyclopedia of American Cars by the Auto Editors of Consumer Guide®, the standard engine for the 500 Skyliner was a 272 cubic-inch V-8 that produced 190 HP. According to Automobile-Catalog the standard engine was a 292 cubic-inch engine that produced 212 HP, the base Thunderbird engine. Either way, Ford sold 20,766 for model year 1957. Sales declined to 14,713 in 1958 and 12,915 in 1959, which was the last year of production. From Classic Cars a picture of a 1957 Ford Fairlane 500 Skyliner: 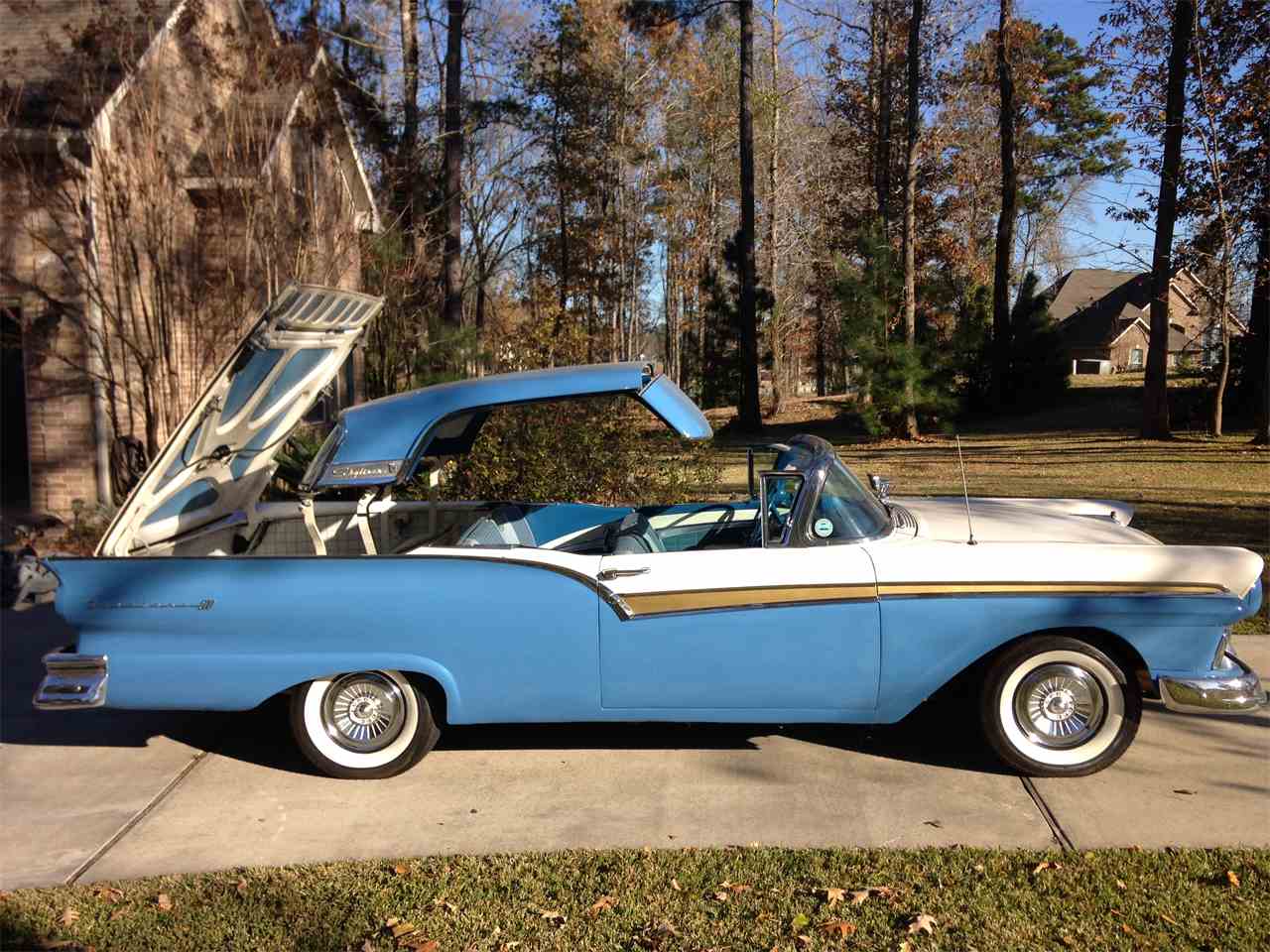 One of these, the same one, is brought to almost every local car gathering. The owner is extremely proud of his Skyliner and it seems to be in excellent condition.

Come full circle and the C8 Corvette is available in the first hardtop convertible offered in a Vette. Once again, I think the likelihood that my wonderful wife will own one of these is far greater than 50-50.