My condolences to Al Kaline’s family and to the Detroit Tigers family. Kaline, a first-ballot Hall-of-Famer, died on Monday aged 85.

Although he is associated with the Tigers, Kaline was born and raised in my hometown of Baltimore, Maryland. He signed with the Tigers as a “bonus baby” in 1953. In those days before the amateur draft, teams would often spend a lot of money on signing bonuses for high school and, less frequently in those days, college players. (Remember that with no draft all amateur players were, technically, free agents.) In an effort to remove the incentive to do so, baseball instituted a scheme where a team giving a player more than a specified bonus would have to keep the player in the major leagues for two years before they could send him to the minors. Sandy Koufax was also a “bonus baby.” Of course, teams would often get around the two-year rule by “misreporting” the bonus.

Charlie Eckman—native Baltimorean, long-time NBA coach and referee, and long-time sports commentator on Baltimore TV and radio—tried to get the Washington Senators to sign Kaline. He graduated from high school before the St. Louis Browns moved to Baltimore and became the Orioles.

Kaline never played in the minors before his major league debut in June of 1953. He won the American League “batting title” in 1955 at the age of 20 and in just his second full major league season. Of course, we know better today than to think that the player with highest batting average is automatically the best batter.

Kaline’s list of accomplishments is quite long and culminated in his being elected to the Baseball Hall of Fame in his first year of eligibility in 1980. He continued to work for the Tigers organization in various roles until his passing.

From the Baseball Hall of Fame a picture of Al Kaline:

Not as significant as the passing of Al Kaline, but my lip has improved although it is not completely healed. Yesterday, frankly in a state of panic over the lip sore, I took the dose of Amoxicillin I would normally take before a trip to the dentist. Whether because of that or because I finally had a decent night of sleep, my lip is far less painful today. Of course, I am still going to take it easy on solid foods in an effort to minimize the risk of biting the lip again.

Another very funny post from Archon’s Den includes these:

People in sleeping bags are the soft tacos of the bear world.

Any job is a dream job…. if you fall asleep during staff meetings.

All my childhood punishments have become my life goals:
Eating vegetables, having a nap, staying home, going to bed early.

What automobile preferences do you have that might be considered odd by many? My infatuation with the Buick Reatta and Cadillac Allante would probably qualify. In an ideal world with an extra digit or two in our net worth one or both of those would probably reside in our garage.

I think I have shown this car before, but here is another “odd” preference, a 1960 Rambler American (a 1958 or ’59 would suffice, the picture is from Barn Finds): 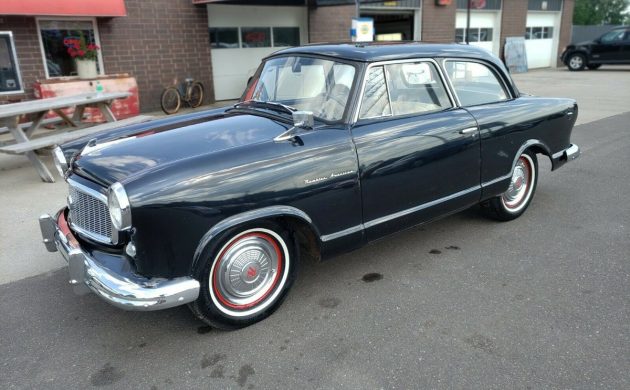 “The heart wants what it wants.” I don’t think I can articulate why this car appeals to me. Maybe it’s the angled B-pillar, maybe the hood/deck proportion just appeals to me, I don’t know.

This was certainly not a performance car as the most powerful engine available from the factory was a 196 cubic-inch inline six that produced 127 HP. I couldn’t find the torque rating for this optional engine. Output for the standard engine was 90 HP/150 LB-FT.

As I have written before, except for my strong disdain for certain German makes, I am kind of an agnostic when it comes to cars. An automobile from almost any country or make can appeal to me depending on the particulars.

I would like to read about your “odd” car preferences. Don’t worry; no one will judge you here.

8 thoughts on “Wandering Through Wednesday”