I guess when all of this subsides I will have to finally break down, go to the dentist and get fitted for a biteguard to wear at night. I regularly bite my lips, my tongue and my cheeks while I sleep. At present, I am dealing with a horrendous sore on the inside of my lip caused by multiple bites of the same area. I also think the stress of current events is impairing my body’s ability to heal.

A much happier interpretation of bites:

56packardman mentioned these in a reply to a comment I left on one of his posts. The picture is from burpy.com. I don’t recall ever having eaten these before, but you can be sure I will soon.

Where do you go for a “mental escape?” I am not asking so I can reveal my preferences; I am asking so I might learn something.

My routine has not really changed much in this time of social distancing. I have had to give up one of my few escapes, dining in restaurants. However, I definitely know something is much different and I am not one of those people who is obsessively consuming news. Any suggestions you can offer would be much appreciated.

One way I can tell the world/my world is different is that the joy I receive from thinking about cars has diminished. I doubt this is a permanent change, but it has decreased the “return” on an escape.

Maybe I’m just in a holding pattern waiting for the move to the desert. In an arc on Seinfeld Kramer wants to move to LA to get into show business. At one point George asks him if he is really going to California. Kramer’s response, “In my mind, I’m already gone.” Yes, that’s a funny line, but that also describes my state. I am a person who, when a course of action seems appropriate, just wants to take that action ASAP.

I think life is about doing things, not waiting to do things. None of us is guaranteed tomorrow.

On this day in 2004 the Empire State Building was lit in Ferrari red to celebrate the 50th anniversary of Ferrari’s presence in the United States (also in conjunction with New York Auto Show activities), which is traditionally Ferrari’s largest market in terms of sales. From 365 Days Of Motoring (not a secure website):

From Wikipedia a picture of Ferrari’s best-selling car ever, although now discontinued. For 70% of the people who bought this car it was their first Ferrari.

A Ferrari California is NOT a candidate to be a Corvette companion in the desert. It’s too expensive to acquire AND to maintain and is a “fail” as a grocery car. Still, let me see what Hemmings has: 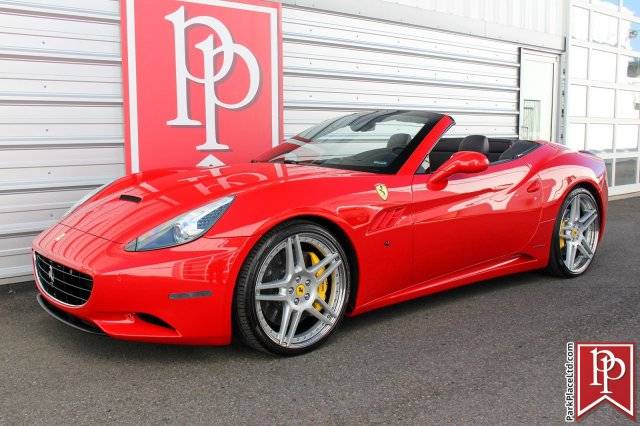 As I have written before, the allure of winning a huge lottery jackpot largely resides in the cars we could buy—and in a house in which we could have those cars. I do not expect to win the lottery, but it sure is fun to dream. Ah, an escape…