On this day 50 years ago the great Secretariat was born at the Meadow in Doswell, Virginia. You see, not all great racehorses come from Kentucky. Technically, all thoroughbreds have the same birthday, January 1, but that’s just a contrivance to classify horses.

In case you don’t know, [everyone] or even if you do, Secretariat won the Triple Crown—the Kentucky Derby, the Preakness Stakes, the Belmont Stakes—in 1973. He is recognized as the holder of the fastest time in each of those races although his Preakness time is the subject of controversy. His time in the Belmont Stakes remains the American record for 1 1/2 miles on dirt. Andrew Beyer developed a metric, now called the Beyer number and which is included for every horse in the Daily Racing Form, that combines the “raw” time of a horse in a race with the track variant, a number that represents the inherent fastness and slowness of the track on a given day. I’ll let Beyer take it from here: “[For the Belmont Stakes] I came up with a figure of 139, which is by far the best of any horse I’ve seen…Secretariat was in a different dimension than any other horse we’ve seen in modern times.”

He was also the first horse to be named American Horse of the Year as a two-year old. The Triple Crown is for three-year olds only, meaning that Secretariat was Horse of the Year the only two years he raced. (As part of his syndication sale it was stipulated that he would not race after his three-year old season.) I am not an expert on horse racing history, but to me he was easily the greatest thoroughbred racer of all time.

From Horse Racing Nation a picture of Secretariat during the 1973 Preakness: 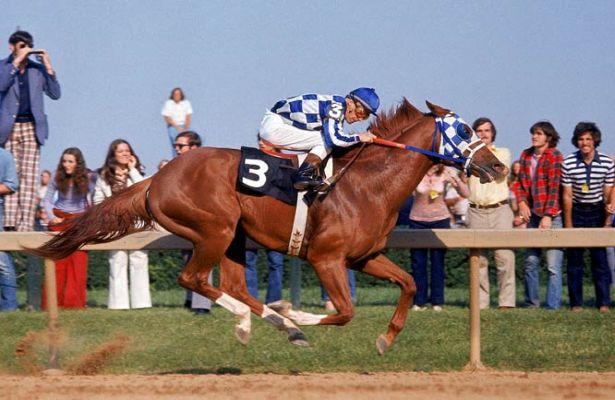 Um, that’s quite an honor. I believe that a percentage of Corvette fans do see the car as a “diamond in the pigsty,” the only bright light in a field of dark sameness. However, I don’t think an honor like that is something that a company can merely stumble upon like the proverbial blind that stumbles onto an acorn. To me, that’s why the many failings of General Motors are so frustrating. Historically, the company has been capable of greatness. Currently, the C8 Corvette is an example that GM can still produce greatness. Why it does not do so on a regular basis could be, and has been, the subject of a book and is too big a topic for a 500-word blog post. From Bring A Trailer a picture of a 1999 Corvette, in Red, of course:

My first Corvette was of the same generation, a C5, although I didn’t like red cars when I bought it in 2004:

That’s my 2002 Corvette in Electron Blue Metallic. I would like to read the thoughts of the Corvette owners out there about their cars and how they see the Vette’s role in the automobile universe.