As my birthday was two days ago and it was a “milestone” birthday, and given the other family birthdays, today was supposed to be the day for a birthday bash with a few friends and family. My longtime friends Dr. Zal, Dr. Hoss and Cutch were all supposed to attend, all of whom also have March birthdays. Alas, the best laid plans of mice and men often go awry. The exigencies of life intrude as they often do.

For someone with depression and OCD, this coronavirus situation is especially difficult. As someone who has almost always resisted doing what other people tell him he should do, I am chafing to the point of mental rash.

On this day in 1941 construction began on the Ford Motor Company’s Willow Run manufacturing plant. Make no mistake, the plant was built to help with the Allies’ World War II efforts by building aircraft, even though the beginning of construction was roughly eight months before Pearl Harbor.

, friend of the and so-called pacifist, was a reluctant conscript. Ford built the plant and then sold it to the government, leasing it back for the remainder of the war. When the war ended, Ford declined to purchase the plant and new carmaker Kaiser-Frazer took ownership. Ironically, General Motors purchased the plant in 1953 and operated it as Willow Run Transmission until 2010.

By the end of 1942, Willow Run had only produced 56 B-24 Liberator bombers and the plant had been saddled with the nickname “Willit Run?” However, by the middle of 1944 the plant was completing a plane every 63 minutes! In total, more than 18,000 B-24s were built. The B-24 was surpassed in capability by more modern bombers such as the B-29 Superfortress and was quickly phased out of service by the US.

I am citing this day as the beginning of construction based on two sources. The Wikipedia article about Willow Run names April 18, 1941 as the day ground was broken on construction. From that article a picture of a B-24: 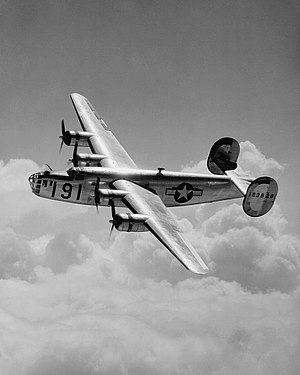