First…even though their market share in the US was less than two percent, in the third quarter of 2019 electric cars still outsold cars equipped with…manual transmissions. (Sorry, can’t remember where I read this, but I’m virtually certain this is correct.) I believe that 1.8% of new cars sold in the US in that quarter were electric and 1.1% had manual transmissions. The latter figure has to be an all-time low. 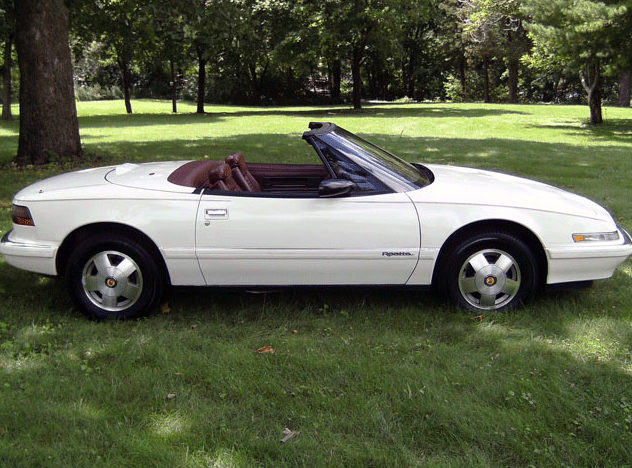 This is not the actual car—Mecum does not allow the online photos of current and recent lots to be captured—but it is a car offered at a Mecum auction in 2011. This is a 1990 Buick Reatta convertible, of which only 2,132 were built. While I prefer the coupe in appearance, I have always liked the way these cars look. When I moved to California in the mid-1990s I wanted to buy one, but the Buick/GMC/Pontiac dealer from whom I eventually purchased my Pontiac Grand Prix did not seem to want to find me a used Reatta. Production of the Reatta ended in 1991.

Anyway, the Reatta convertible offered yesterday sold, all in, for $3,850. Yep, $3,850. Even if you needed to put that much in it after purchase and had to spend $1,500 to ship the car (I paid much less than that to have my 2016 Corvette Z06 shipped to me from Oklahoma), you’d only be in the car for about $9,000. Everyone from Mecum to Hagerty to Barrett-Jackson is telling us that cars from the 1980s and 1990s are becoming more popular and should continue to do so. While except in rare instances like a 1930s Duesenberg I would never recommend buying a car as an investment, buying something like this could prove to be a money-making endeavor. Even if it doesn’t, you would own a fun, good-looking car (IMO) that is probably not too bad on gas and that could probably still be serviced by Buick dealers for less than ten grand up front.

A car similar to this next one was featured in my Ultimate Garage 2.0. While not a 1965 model, this Hemmings ad shows a car in which I would have interest, especially at the asking price of $16,950: a 1963 Buick Riviera:

While I wax nostalgic for cars like a 1963 Studebaker Gran Turismo Hawk or a 1956 Packard Four Hundred, if/when I buy a companion to my Z06 the practicality of having the car serviced could steer me away (see what I did there…) from a car like that to a car like this. I am not a mechanic and don’t know if I want to start wrenching in my 60s. In addition, if I were ordered to limit my Ultimate Garage to five cars, this generation Riviera would definitely make the cut.

As always I welcome thoughts from you. Have a good weekend…